A private show for friends and family only was played at the same venue on Tuesday night. 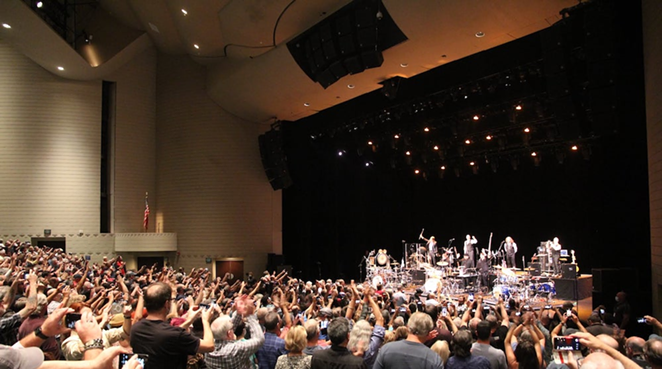 Next week marks 20 years since prog-pioneer King Crimson rocked its last gig in Florida. A gig at Jannus Live (then known as Jannus Landing) was a part of the “ConstruKction Of Light” tour, which promoted an album of the same title. Back then, it was just four guys: Founding member and lead creative force Robert Fripp, Discipline-era guitarist Adrian Belew, bassist Trey Gunn, and Mr. Mister co-founder Pat Mastelotto.

On Thursday, the same week the band played a friends and family show at Ruth Eckerd, the band played what was probably King Crimson’s last Tampa Bay show ever. (Manager David Singleton recently said “it is unlikely that this band will ever return to North America.”)

In the last 20 years, a lot of things have changed in the court of the crimson king. The group that once survived on four members is now packed with seven—two of which have joined Mastelotto on drums. Discipline-era bassist Tony Levin is back in the band, though—as is early member Mel Collins on saxophone.

The band also dropped another album in 2003, entitled The Power To Believe—seemingly without any other new material in sight. Some things never change, though. Thursday night at Clearwater’s Ruth Eckerd Hall—where rehearsals have been held for the last week, King Crimson’s legendary prohibition of photography remained in place, until the band took its bows—and Levin whipped out his camera to photograph the crowd. It’s only fair, right?

INTERVIEW
Ahead of King Crimson tour kickoff in Clearwater, Tony Levin shares the albums and collabs that led him to Robert Fripp

Opening for Fripp and company was California Guitar Trio. Having been acquainted with King Crimson since meeting Fripp in the late-‘80s, the trio effortlessly ripped through an eclectic half-hour set of pedal-infused strumming and shredding. No vocals or commentary was necessary—just three guys who happened to almost mirror the enigmatic feel of the septet that would hit the stage around 8:30 p.m.. The house lights stayed dimmed throughout the duration of both acts, which is not something you see at every show that Ruth Eckerd Hall hosts. This was probably done to match the laid-back, non-frivolous lighting that graced the main stage throughout the show.

“Welcome to a hot date with King Crimson,” a pre-recorded message from Fripp ecstatically announced. Whether you have a thing for drummer Pat Mastelotto’s good looks, or you had the sweltering weather on your mind, a “hot date” only scratches the surface of what was to come.

King Crimson triumphantly, yet casually entered from stage left, with members wearing either all black, or a vest and tie of sorts. Fripp and Collins were both wearing headphones, and had their own respective oasis of rigs set up on opposite sides of the upper bandstand. Down in front were drummers Mastelotto, Gavin Harrison, and Jeremy Stacey—the latter of whom would also bear the task of taking on some keyboard parts, due to the 2020 death of touring keyboardist Bill Rieflin.

Upon the band’s entry to the stage, and the half-full crowd calming down, the drummers gently began the set with “Larks' Tongues in Aspic, Part One,” which seems to be King Crimson’s standard opener of choice ever since reforming in 2014. It seemed simple at first, until you saw all those instruments arising from the shadows, and everything hit you all at once.

“Is that a flute that Mel’s holding?”

“Cirkus,” from 1970, definitely turned some heads, with its twinkly piano opening, and that trademark jump into a completely different time signature—and key—that only King Crimson can do correctly. Fripp, who was seated the entire time, hardly moved at all when other members onstage took on their own respective solos to show off. Even when he and lead singer Jakko Jakszyk traded those experts-only licks on “Red,” the guy hardly moved a muscle.

Finally, a taste of King Crimson’s unmistakable 1969 debut—and magnum opus, In The Court Of The Crimson King came in, when the drummers launched into “Epitaph.” Levin had been swapping back and forth between his upright bass and a red Music Man Stingray bass. For “Epitaph,” it was time to crack out the upright. “Indiscipline” was spot-on, too. Almost spot-on enough to make up for the fact that “Drumzilla” did not make the setlist. Boo.

Following a 20-minute intermission, King Crimson hit the stage once again with a brief rendition of “Neurotica,” followed by the title track from In The Court Of The Crimson King, which caused fists to go up for the first time all night—as well as people imitating the “we’re not worthy” moment from Wayne’s World. Mel Collins’ saxophone, as well as Jeremy Stacey’s keyboards perfectly imitated what sounded like a backing choir in the original recording, too. Closing out the main set was Red’s original closer, “Starless,” which saw the drum trio awaken once more—and even add a cowbell into the solos. It was at this point when the slightly dimmed house lights went all the way down, at an incredibly slow pace. Appropriately, the stage lights turned red, and that would serve as the most flamboyant event to occur at King Crimson’s Ruth Eckerd Hall debut.

A majestic encore of “21st Century Schizoid Man” was not only obligatory, but inevitable from the start. Like with the majority of what was featured on the 12-song setlist, Collins’ sax skills, and the drum trio—carried mainly by Gavin Harrison, gave King Crimson’s best-known song a unique extension from its original recording. Not to mention that Jakszyk’s vocals were distorted, just like on the original recording with the late, great Greg Lake at the mic. Even hearing the song on remastered 200-gram vinyl doesn’t hold a candle to experiencing it in the flesh.

These days, Crimson shows are basically a rock and roll version of a symphony: No talking in between songs, the setlist remains a mystery, and much of what the band plays is capable of going on for increments up to 25 minutes long. Honestly, I don’t understand how the hell the crowd was only half-full. Hopefully, that won’t inspire Robert Fripp and friends to avoid Florida for another two decades.

That is, if King Crimson is still active in two decades.

UPDATED 07/26/21 9:30 a.m. Updated because King Crimson does have shows in Orlando and St. Augustine, so Clearwater's performance was technically not the last Florida show—and because Levin and Belew played on 'Discipline.'

Josh Bradley is Creative Loafing Tampa's resident live music freak. He started freelancing with the paper in 2020 at the age of 18, and has since covered, announced, and previewed numerous live shows in Tampa Bay. Check the music section in print and online every week for the latest in local live music.
Scroll to read more Music News articles

Fall Out Boy brings new tour to Tampa this summer