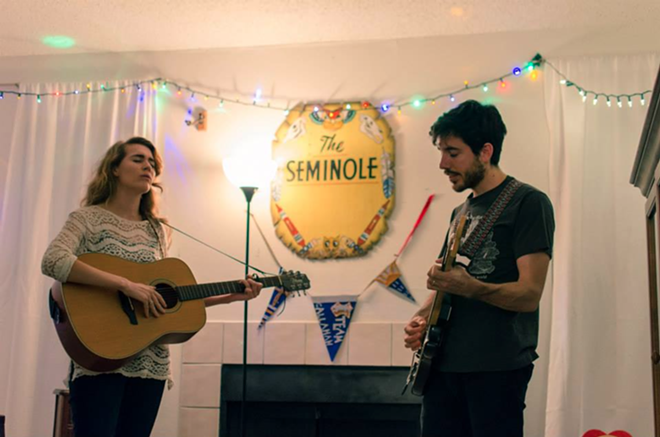 
Depending on where you are in Tampa Bay, the weather outside your window has been either crappy, or crappy, with various levels of miserable mixed in. Lucky for you (or at least your ears), a few Bay area ex-pats have delivered some sunny new music to lift you up and out of the floodwater-filled dirges of your life.

Kathleen and Nick Arnal don't live in Florida anymore, but the husband-and-wife duo managed to bottle up some of the Sunshine State, pack it into a nice little three-song EP — Point Doom — and release it under the Team Callahan moniker. The tracks are a preview of a proper full-length, The Afterglow, set for release on August 28, and if Kathleen's voice and melodies sound familiar, it's because she comes from the same McGuire stable of songwriters that's also produced other area favorites like the Grecian Urns, Happiness Machine, and Sun Society.

The couple moved out to Denver, Colo. after Nick landed a job post-grad school, but the music from Point Doom and The Afterglow was produced in brief bursts between classes and work during their first year of marriage.

"It feels pretty killer," Kathleen told CL when asked about joining the long tradition of husband-and-wife musical duos.  "It's great being self-contained. I write the songs/lyrics and he produces them. It’s kind of the perfect team. I think its good for our marriage to have something we both so deeply care about and get stoked on together."

The copacetic-ness of it all bleeds all over Point Doom's dozen minutes, and it's neat to find the pair joined by St. Pete's own Jackson Davis, who loans vocals to "The Apartment" plus keys and organ on "Best Friend." Kathleen's sister Shaundra McGuire also appears on the record.

Quit reading about it for now, and listen to the EP below. When you're done have a look at our short chat with Kathleen, where she talks about reading a whole lot of F. Scott Fitzgerald, and the possibility of bringing the tunes back to her hometown.

CL: You are joining the long line of husband/wife duos, how’s it feel to have your musical aspirations fuse together with the journey you guys are taking together as a married couple?

Kathleen Arnal: It feels pretty killer. It’s been so awesome creatively because we have always been on the same wavelength and now we just harness that even more. Its great being self-contained. I write the songs/lyrics and he produces them. It’s kind of the perfect team. I think its good for our marriage to have something we both so deeply care about and get stoked on together.

Why the hell would you read The Great Gatsby 100 times? Isn’t there another F. Scott Fitzgerald book you can get in to?

I was being a dash hyperbolic but yeah I first read that in 9th grade and have read it almost every year for sentimental reasons, it’s just my favorite one. I went through a big This Side of Paradise phase when I first went to college and was a young idealist. I’ve’ also forced all my boyfriend’s to read “ as a warning of what they may be getting into.

You are brand new Denver residents. Why did you re-locate?

Nick finished grad school and got a job out here so bam, we moved.

How is the new city and how will it affect the way you record music since you have been working with Jackson as well as a lot of the McGuire gang?

Denver is really cool. It has a lot of great energy and creative outlets. There are literally 55 local coffee shops and the music scene is very vibrant, which is really exciting. I mean, we could’ve moved to Cowtown, Oklahoma with no local scene. I feel like we will still collaborate a lot with Jackson and The McGuire clan remotely or in bits and pieces when they come visit us. My favorite part of the album is Jackson’s verse on this song “The Apartment,” I feel like he will always be involved in one way or another with our projects.

What generational failings are we talking about on Afterglow?

That particular phrase may have been an overstatement or at least premature but in the young and hip-culture I’ve e noticed a pattern of slackerism, cool-to-not care mentality, a shift toward the perpetual adolescence of the '60s (at least Tom Wolfe’s rendering), where its acceptable to live like an 18-year-old at 29. The whole record is not about this at all just a handful of tracks treat this theme. I don’t want to come across like a judge or some wannabe prophet; I just had to write about some stuff I’ve observed about my subculture that I think may be counterproductive five years down the road. I got a little pissed off when I went to L.A. two summers ago and that’s what got me noticing those sort of cultural patterns.

When will you be coming home to play these songs for Tampa Bay?

Only if we get to open for Jackson Davis and the Jackettes. But seriously, whenever we can get back and play, it’d be a blast