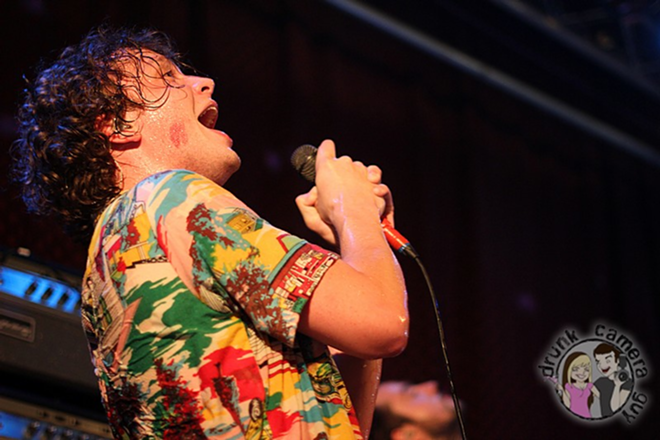 I have never seen so much passion on the dance floor. And I've seen my share of public sex. [review by Mike, photos by Drunkcameraguy.]

Friendly Fires stormed The Social this past Saturday night and proved themselves worthy of attention in a city filled with shows; next door at Becham Theatre, Thrice was performing while down the way at House of Blues, Death Cab For Cutie packed it up.

The British dance pop gods managed to sell out their first-ever show in Orlando. I've been to many shows at The Social, and have squeezed through the worst of the worst. But this time was different. Everyone in attendance was there for the same reason: see how many people you can dance on without getting a splash of rum to the retina.

Sometime after 11 p.m., Friendly Fires hits the stage, opening with "Lovesick" off their 2008 eponymous debut.

Cue the first drops of sweat.

There wasn't a better way to start off the night with these boys. From the first note to the first dance move, the crowd was just as into it as energetic frontman Ed Macfarlane, especially with his numerous trips and dips into the crowd. This added to the experience. Watching Macfarlane as he danced his way through the mass of people while singing at the top of his lungs was a highlight of the evening — that and hearing my favorite tune of all time, "Skeleton Boy."

I was expecting the three British boys to be the only ones on stage, but to my surprise, they had three aux players on the road with them, putting them at six. A horn section added to the disco inferno, walking on and off stage every few songs and melting panties on the saxophone and trumpet. These British dream boys are better live than on both albums, prolonging particular bridges and transitioning into the next track without missing a beat. I've never heard cowbell sound so good. I had a sickness. And the only cure was more cowbell. Please stop reading if you didn't get that.

Side note: Who wears a Hawaiian shirt with houses, surfboards, and random beach scenes on stage? Ed does. Why? Because he knows it'll swoon you. And it definitely did. I watched a girl grab his ass, straight up grab and not let go. I'm pretty sure she made some sort of deep connection with Macfarlane until their tour manager relieved her of her duty.

The boys ran all over their two albums grooving out tunes like "Show Me Lights," "Paris" and "Jump In The Pool." After a few minutes of cheers for an encore, FF wandered back on stage and delivered "Hawaiian Air," their newest single off 2011's Pala. There were some other great songs performed that evening, but I was too pre-occupied with trying to learn new dance moves. Speaking of — Eddy boy puts the shake-your-ass in DANCE, wherever that fits. But really, he does. Find a better groove maker. You thought YOU made love to the dance floor? No, that's just the cheap bottom shelf vodka.

Overall, I'm glad I missed Friendly Fires at this year's Lollapalooza so that I could see these young men in a more intimate setting, under the disco ball that we have all learned to love or hate, depending on your outrageous drinking problem.