The party happens on Dec. 10 at The Curt. 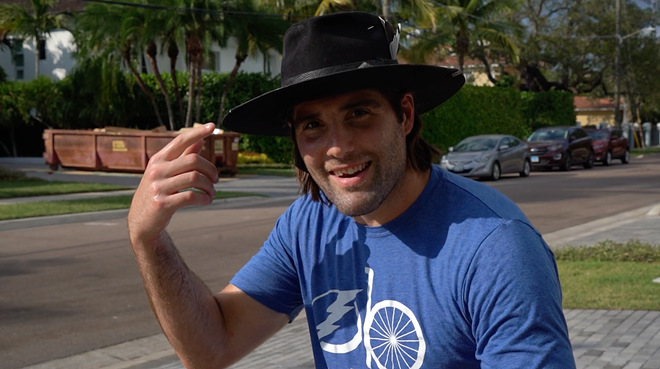 Photo via onBikes/Vimeo
Pat Maroon is the Tampa Bay Lightning's resident Florida man.
Who needs a partridge in a pear tree when you've got party boy Pat Maroon?

The three-time Stanley Cup champ (aka "Big Rig") is the emcee for onBikes' annual holiday Winter Wonder Ride and fundraiser, which is being dubbed the "Ho Ho Hoedown" thanks in part to musical headliner, country duo Locash (stylized "LOCASH").

Tickets to onBikes' 11th annual Winter Wonder Ride happening Saturday, Dec. 10 at Curtis Hixon Waterfront Park in downtown Tampa are on sale now and start at $55.
For the uninitiated, Maroon, is the Tampa Bay Lightning's resident Florida man, and really the only guy you want to hand the mic to at a party. Locash, fresh off a single “Beach Boys” with Mike Love & Bruce Johnston are no strangers to the area, having played NHL playoff parties at nearby Sparkman Wharf.

The event at The Curt starts at 2 p.m., while the costumes-encouraged ride through downtown and up and down Bayshore Boulevard kicks off at 4 p.m.

A bike valet is included—and don't worry about drinking and riding because you have until 11 a.m. the next day to pick up your bike.