Meet Tampa’s own JJosh, the 16-year-old Blake High student trying out for the American Idol reboot

The audition is today. 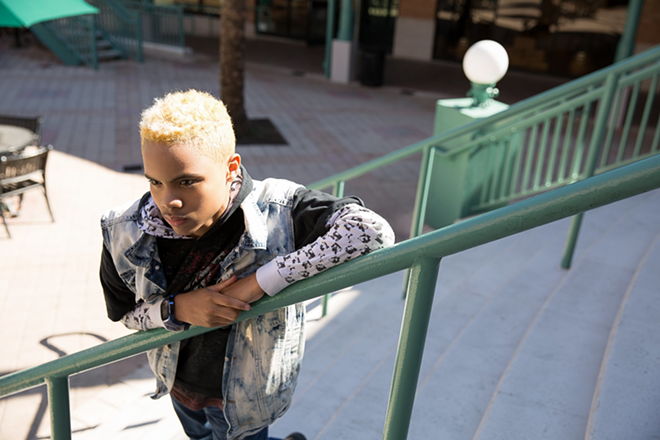 At some point today, 16-year-old JJosh is going to be singing Bruno Mars and Lady Gaga songs at American Idol auditions in Orlando. The show, which spent 15 seasons on Fox, is set to reboot on ABC, and is spending the day trying out singers. The Blake High student been waiting to do it since he was 7-years-old (minimum age to audition is 15), and while singing in front of big crowds has never been a problem for the Bay-area based singer, doing it front of judges may be a different story.

“Nervous?,” the wrote to CL in a message days before the audion. “Yes, but it’s a good nervous.” JJosh — born into a military family some 8,000 miles away in Okinawa, Japan — shouldn’t worry too much.

Just listen to this cover of Lukas Graham’s megahit “7 Years.”

“My producer was trying to get me to sing an original for my first song,” JJosh, who sings in the choir at Revealing Truth Ministries, added. “[But] I really relate to this song — don't know why, but I just do. I also wanted my own arrangement.”

Jjosh has plans to release an EP of original music be next summer. In the meantime, we’ll be rooting for him to grab one of those golden tickets.

Read our Q&A — and listen to the cover — below.

Most people don’t make it out of the shower my friend, but a performance of Earth, Wind and Fire got you going. Where’d you get your taste in music?

I grew up listening to...you said it...Earth Wind and Fire, Michael Jackson, love those guys... and even old favorites like from Frank Sinatra.  My parents had this CD collection that would go on forever of artists that were ancient like back in the 70s, 80s and 90s.  Now, I also love Bruno Mars and Lady Gaga.

What school are you going to right now?

When is your birthday?

“7 Years” is a cover. What’s the outlook on some original music from you?

I know and my producer was trying to get me to sing an original for my first song.  I don't know but I just love this “7 years” song, and I really relate to this song — don't know why, but I just do. I also wanted my own arrangement. My producer wrote the arrangement in an R&B beat because that is how I kept hearing it inside.  I am now writing a few songs and hope to begin recording by early next year with a new release of an EP by Summer 2018.  That EP will all be originals .  I have a lot to say and I want to write songs about it.

Talk about Revealing Truth and what being in a choir can teach a young singer.

Other than enjoying this, this is my way of giving back...for now anyway. This is a non-denominational church in which I belong to this choir which is part of the Embracing Legacy Program which is everybody is under 21. This program helps troubled teens all over the world including inner cities. Last year I signed up to go with the choir to the Bahamas.

We went to visit some remote areas, other churches and experienced a lot.  We have it so good here in America. Being in a Choir is great because I practice harmonies all the time, and iit has helped me to work as a team and not so much as a solo artist. I have been been taking intense vocal lessons for two years preparing to record my single. When I was recording the single, my producer used my own vocals to create the back harmonies to my own lead vocal. It was fun!

Lastly, talk to us about your Idol audition coming up. Nervous? What do you think you’ll be singing?

Nervous? Yes,  but it’s a good nervous. I have been dreaming of doing this since I was 7, signing in front of crowds since I was like 5-years-old — I love it. But I get a bit nervous in front of two to three like when my producer auditioned me to see if he wanted to produce me. Or like the judges on American Idol — yikes!  But in front of 1,000 people, I feel great on stage. I was asked to pick a couple of songs. My first pick is one from Bruno Mars and my second pick  isone from Lady Gaga.