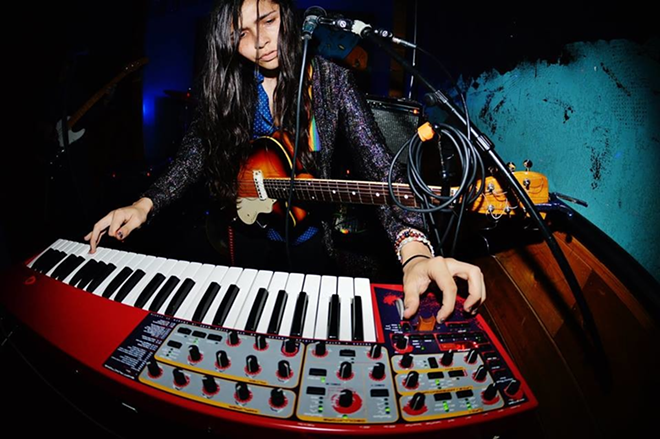 Jasmine Deja has been writing material for her Soapbox Soliloquy project since she was in her first band, the late Article 47. Three years later, the 21-year-old multi-instrumental songstress juggles membership in a few groups (Selectric and Veiny Hands) while self-producing Soapbox Soliloquy songs in her bedroom’s Rhombus Window Studios. She has a few LPs of super-psychedelic sounds out under the moniker, including oozy, fuzzy, whirly, dreamy recent outing, Heady Stones (currently in the running for this year’s best).

She brought on a few guests for Heady Stones, but prefers to record alone, describing the experience as a sort of mediation. “I could spend the whole day locked in my room recording, zone out for hours at a time and then at the end, have a piece to show for it. So I don’t think I’ll ever abandon that aspect of Soapbox Soliloquy, because it’s just so ridiculously rewarding and centering.” She’s expanded her one-woman live show into a few collaborative configurations: the Soapbox Soliloquy Live Band Experience, featuring Heady Stones guests Gino Capone (Johnny Mile and the Kilometers, Teddy Ruxpin) on bass and accordion slinger Nick Boutwell (aka Whitey Alabastard) on drums and synth noise; and Soapbox Soliloquy and the Nimbus Initiative, assembled to record a Grand National Championships set and to perform a one-off this Saturday. That group includes Capone and Boutwell plus Fernando Diaz (Fictional Friends, UFO Sex Scene) on keyboards, Riley Morgan (Ask For Tiger) on 12-string acoustic guitar, Drew Anthony (Sonic Graffiti, Selectric, Deadborns) on lead electric guitar and Trevor Mustoe (Sonic Graffiti) on drums. “This is the biggest band (in sheer numbers) that any of us have been in and a new learning experience in scheduling, composition, and arrangement for us all.”

What do the guests on Heady Stones add to the mix?: “After creating "The Soapbox Soliloquy Live Band Experience," I had shown two unrecorded songs to my bandmates, Gino and Nick – second track, “Oxy Hannah” (Gino played bass and Nick played drums), and the ninth track, “Change” (Gino played bass and synth and Nick played drums). I took such a liking to what each made the songs into that I felt it would be silly to record by myself, because I'd probably just end up asking them to show me their parts. So instead, I asked them to record with me. The 13th song, “Bones and Flesh” (aka “Mad Walter”), was actually written by my former bandmate, Steven Borkowski, and we used to play it in Article 47. Always a fan of the song, I had asked him if I could start performing my own rendition, then after playing it for a few months, I asked if he'd mind if I recorded it for my new album as well. He and his brother, Paul Borkowski, moved to Gdansk, Poland, but it only seemed fitting that they were on the song somehow, so they graciously accepted my request to record backup vocals on the track and sent them my way.

“I brought them in because each time, they seemed entirely necessary to suit the song and those collaborative efforts are what made the songs extra important for me.”

How have your creative influences changed from your first album to Heady Stones? “When Katherine [Kelley] and I first met, a lot of our first times hanging out and getting to know each other revolved around music, specifically around vinyl records. We used to come over to each others’ place with an armful of albums that we cherished most and would give them a spin. We'd talk about what we appreciated most about each song, pointing out our favorite subtleties as they came about, as well as what the album as a whole meant, when we discovered it, what it meant then and the whole lowdown. While our tastes obviously overlapped, I experienced a number of her favorite albums for the first time and now have a deep fondness for them. I can't think of any specific ways that they have influenced my music, but I'm most certainly sure they have.

“However, just before recording this album I got new gear that definitely influenced my creative process. Katherine had bought a guitar in a Tennessee pawn shop a few years before we met due to an unexplainable attraction to it, however, it was a hollow body, which didn't really work for her music, so it ended up in her closet. When she met me, I was wielding an acoustic through a pickup, so she gifted it to me in addition to a Kaoss pad, and looper. Morgan Soltes (PLEASURES) also became a creative catalysis/influence by giving me some of his old pedals as well."

The story behind “I Want Your Carcass”: “I was watching a documentary on birds of prey with [girlfriend] Katherine [Kelley] and wrote it about the lammergeier (bearded vulture). The Lammergeier is a second hand decomposer of sorts, it's the clean-up crew of the mountain ranges of Europe, Asia, and Africa, essentially, as it feeds upon the marrow inn the bones of prey that's flesh has already been stripped by vultures. So while on the surface, being a human singing from the perspective of a bird of prey, it sounds really gruesome or vile, yet at the same time, it also can be read as sexual and that duality was intriguing to me. So I wrote a song about it. Then the third layer to it is, when you strip the song itself to the bare bone, it ends up being a love song glorifying the simple action of having a good time and watching a documentary with my love.”

How she’s building a fanbase: “I’ve recorded and released music pretty consistently under a number of different projects and end up playing out just about every weekend. As for a national level, I went on tour last summer, and plan to tour a lot more next year.”

The hardest thing about making a career of music: “Getting people to care about what you’re doing.”

Ultimate goal, or desired outcome?: “Well as just about any musician, I would like to eventually not have to worry about doing anything aside from making music and support myself entirely on such. I guess that was always ‘the dream’ but still is nowhere near the focus of my work, just would be a nice benefit.”

Any big news? “I am releasing Heady Stones in a run of 100 purple vinyl at the end of the year in addition to a split 7" with Sonic Graffiti. It will have Sonic's song, ‘Ghost Steppin,’ my song, ‘Ghost Caress’ (remixed and mastered), and two vinyl exclusive collaborative songs that Drew and I each wrote.”

Soapbox Soliloquy’s favorite local artist: “Johnny Mile And The Kilometers, because ‘Can’t We Just Rock?’ is the question of a generation.”

Song(s) that get the most positive feedback in a live setting? Favorite song to perform?: “What seem to be people's favorite in the live setting (in no particular order) are: ‘Murder Mountain,’ ‘Besiege My Keep,’ ‘Drain the Chimney,’ and ‘I Want Your Carcass’; ‘I Want Your Carcass’  is a lot of fun to play live, because we extend the ending with an improv jam, which is always fun, blindly exploring the sonic landscape.”

Favorite show in recent memory?: “Playing live on WMNF the other night. It was the biggest band I've ever played in, everyone really worked hard to get the songs down and it was electric.”

Favorite place you’ve played on tour?: “New Mexico, we played at a really cool warehouse called Ghost and it was just a really good show, it was just one of those times that it totally clicked.

Preferred local venue: “The Bends because they’re always so kind and know how to throw a party.”