The co-founder of Blue Chair Music on his role in local mid-'90s counterculture. 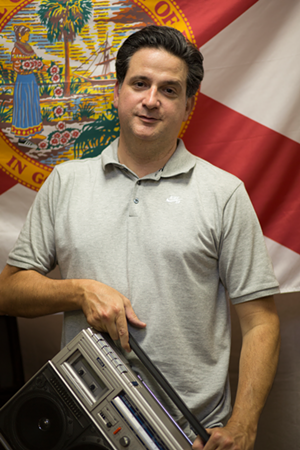 Standing outside the messy downtown retail parcel where his band, Science, practices, Edwin Velez clutches the handle of an old-school plastic boombox as he explains how the machines were engineered to maximize the potential of the mix that engineers cooked into cassettes. Tapes were the main vehicle for hip-hop music, which, in the 1980s, was making its way out of Big Apple boroughs and into the hands of youth across America.

There’s a little bit of sweat starting to bead up on Velez’s forehead. It’s probably just the humidity and Florida night heat, but it’s hard not to imagine the 44-year-old Tampa native scurrying around this very block (where Cafe Hey and Oceanic Market sit now in the shadow of I-275) when he was a middle-schooler booking shows at what’s widely misremembered as The Paint Factory.

“Don’t let them lie to you,” Velez tells CL. “It was called Skyscrapers. That’s what the kids knew it as, and that’s what Green Day remembers it as, too.”

Velez, a Brandon High School grad who grew up throwing hardcore and metal shows at suburban spots like Side Streets and Riverview Sandwich shop, is talking about Green Day’s 1990 stop at Skyscrapers in support of Slappy, the band’s second EP, which arrived almost half a decade before Dookie would catapult them to superstardom. At this point in his career as a promoter, Velez was used to throwing concerts together.

“There was a zine that [national punk-zine touchstone] Maximumrocknroll put out, and it was called Book Your Own Fuckin’ Life. You could open it up and be like, ‘Hey, can we play in Poughkeepsie?’” Velez says, explaining the DIY directory listing of concert promoters around the country. “So I’m at my mom’s house at 15 years old and taking calls from these bands so me and my friends could make the shows happen.”

Velez — who would grow a little older and go on to open Ybor City record store and venue Blue Chair Music with former CL music critic Tom Roe and another local writer, Marty Clear — says he had to trick venues into letting him put on shows back then. Looking for the ones that were obviously struggling was always a good route.

“Shows were not revenue drivers, no one was interested, but I was the master of tricking people,” he says, laughing. “I’d find a venue and be like, ‘Ooh they need us,’ and it worked for the hip-hop and hardcore shows we wanted to book.”

It’s a good thing he did, too. Hardcore legends Quicksand, Jawbreaker and even Run-DMC are just a sample of shows booked by Velez and friends in those days. Blue Chair — along with places like Three Birds Tavern and Covivant Gallery — would end up becoming vital players in the Bay area counterculture movement of the early-to-mid-’90s. Velez’s scene blended the worlds of metal, rap, experimental music and even poetry readings. Every now and then, an open mic might get violent, but Velez’s years dealing with punks made what would be a newsmaking headline in today’s climate feel more like a minor skirmish.

The drama, not to mention the lack of revenue, was probably more of a headache than it was worth. But if Velez ever felt inconvenienced by his fiscally fruitless efforts, he never lets on. Though his grown-up day job these days involves working in commercial real estate, he”s still committed to creating spaces for kids to play and experience music. He tells stories about the early days of Death, Deicide and Executioner (who would go on to become Tampa death metal gods Obituary). At the heart of it all? The satisfaction of seeing bands get validated for their creative efforts.

“In Tampa, bands aren’t jaded by big-city culture. There aren’t a bunch of labels or agents running around, and you have more freedom,” he theorizes, explaining how watching a Brandon band like Nasty Savage play to thousands of people in Poland blew his mind.

“This was not something normal. In Europe, they still remember [Nasty Savage], they know the setlists from the shows and have vinyl from every Tampa band in that scene,” he said. For young kids living in the ’burbs, it must have been beyond life-changing. “These kids could sit around and be like, ‘Yo, I’m in the country out here in B-town [Brandon], but my music is legit.”

Every one of the aforementioned venues eventually folded under the pressure of urban development or a plain lack of funds, but at the end of the day, a sense of justification might be a part of what bands — local and otherwise — are still looking for. They don’t necessarily need to be popular, but they should feel like they have a place to play music and grow. Our cities might not always be the incubators we need them to be, but we hope there will always be people like Edwin Velez doing whatever it takes to make sure we try.