Music Issue: Hip-hop high points — they made it happen for the Bay 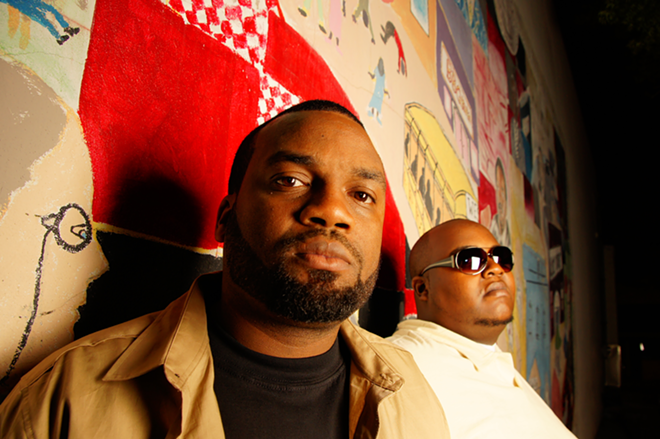 After the era of Q105 party mixes and Rockin’ Rod mixtapes, legendary WMNF DJ Kenny K burst onto the Tampa hip-hop scene in 1986 with a ridiculously confident attitude and a palpable love for bringing New York hip-hop to a market saturated by Miami bass. Kenny K was a key player in the early days of pioneering hip-hop outfit Digital Underground, who used funky samples and Shock G’s outrageous personality to change the face of the genre in the early ’90s. Waxploitation did a great profile on Shock G, which includes some pics from the Tampa days.

At a time when ass-shaking and shit-talking was the order of the day, this Tampa emcee dropped Elevator Music: The Art of Thinking, for which he tapped locals like Eyeznpowa to help him bring real-life stories of real jobs (“What I Gotta Do”) and falling in love (“411”) to the Tampa sound. Exclaim! Magazine thought the album would catapult Uncle Shredded Whea to the top.

A true Tampa original, Tom G was part of an era that ushered in the area’s signature “jook” sound. A 2003 mixtape featured “City Boy Wit It,” which was a total underground hit. Tom G still throws shows in Tampa and recently earned praise from Warren G after a recent freestyle over “Regulators.”

If you were a music-loving kid with any inkling of free time in the early 2000s, then you know Tampa Tony’s own 2003 classic “Keep Jukin’.” In 2016, he was serving a life sentence on two cocaine charges, but was granted commutations that shortened it to 240 months.

The Tampa production outfit made up of Erik Ortiz, Kevin Crowe and Kenny Bartolomei, who went on to produce parts of Mary J. Blige’s 2005 album, The Breakthrough. The League’s efforts earned it a Grammy (Best R&B Album) and opportunities to work with a who’s who of rappers including Drake, Nas, Jeezy, Rick Ross and more. These days, the League is one of the loudest voices in making sure young producers are treated with the respect their talent deserves.

At the turn of the decade, Bay area acts like backpack ensemble Red Tide and The Villanz kept underground hip-hop alive by hitting clubs and coffee houses with smooth, sharp rhymes that drew influence from Jay-Z, Nas, Notorious B.I.G. and even Gil-Scott Heron.

Dynasty is a Big Apple expat who found her voice opening for Little Brother and Wu-Tang Clan in Ybor and St. Pete. She soon caught the attention of Tampa’s DJ Sandman, who knew he had to be along for the ride. As of this writing, Dynasty has played multiple sold-out shows in Europe and even collaborated with famed Brooklyn tastemaker DJ Premier.

Another talented Bay area emcee gifted to us from New York, Mass now reps the South on frequent trips to Sway’s Sirius XM shows, where he routinely slays the ex-MTV VJ’s viral freestyle challenges. A new slew of Tampa emcees like Louis Junior, Gat$ and Vern Senior are coming up fast on the path Mass cleared for area artists.