Music Issue: Where the records were, and still are, in Tampa Bay

From Asylum to Microgroove, these are shops that defined the Bay area 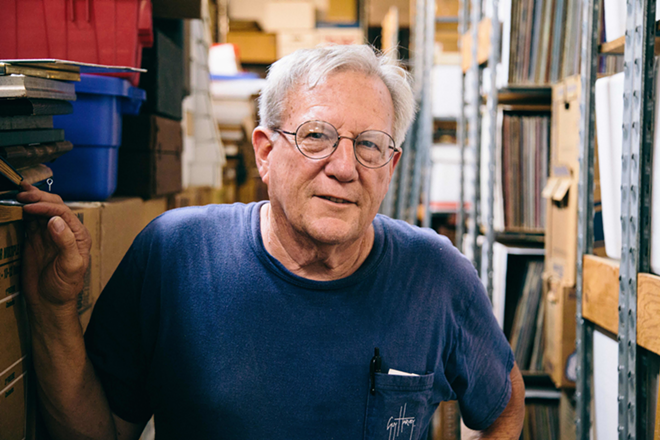 An export from Sarasota, where it opened in 1970, Asylum expanded to Pinellas in ’76 and is widely regarded as the the Bay area’s first record store. It’s a combo CD store and head shop these days, but we must salute the original.

Doug and Michelle Allen started selling records at their bookstore and Bananas Music was born. The Allens’ warehouses are now home to an estimated 3 million items (unofficially the “largest record store” in the U.S.), and collectors regularly spend hours (and sometimes days) getting lost in the stacks. A second location opened in 2010, and Bananas’ 22nd Avenue North spot is a nice primer for anyone looking to dive headlong into the shop’s rich history. Listen to a recent podcast interview here.

Mike Mann opened Vinyl Fever on Tampa’s Fletcher Avenue and then launched a Tallahassee store two years later. Lee Wolfson, an employee at Columbus, Ohio’s Singing Dog Records, ended up running the Tally store in 1984 and worked at both locations within three years. Vinyl Fever moved locations a couple times during its tenure in Tampa, but eventually decided not to relocate when a lease on its Henderson Boulevard store ran out in 2011. The shop — named one of the best record shops in the country by Rolling Stone — is still regarded as one of the best the Bay area has ever seen.

Read: Here's a list of all the record stores in Tampa Bay — it's evolving

Daddy Kool Records opened in Bradenton and operated for more than a decade before Tony Rifugiato cut the ribbon on a St. Pete shop next to the State Theatre. The store would eventually land in its current, larger space at 666 Central Avenue, where Rifugiato, Manny "Kool" Matalon and the rest of the dedicated staff sell concert tickets, toys, vinyl, CDs and more. Rising rents on the 600 Block are changing the area’s aesthetic (a biscuit joint is slated for the old Local 662 rock club), but Daddy Kool has no plans to move for now.

Sound Exchange opened its North Tampa location in ‘87 before expanding to Brandon (‘92) and Pinellas Park (‘01) en route to becoming the largest locally owned mini-chain of stores peddling used CDs and vinyl as well as stereo equipment and DVDs.

Nick Sorace opened the Disc Exchange at 6712 Central Ave. in St. Pete, where a growing collection has the room pretty much bursting at the seams. Sorace’s warm demeanor and deep knowledge of his inventory make it a must-stop shop. Ybor City’s Blue Chair Music opened in ’92 near the corner of Seventh Avenue and 17th Street (where Buffalo Wild Wings is now). Created by Edwin Velez, Tom Roe and co-owner Marty Clear, Blue Chair was a symbol of the pre-Centro days, a record store that also provided space for rock and rap misfits to hold shows on the fringes of counterculture. The Ybor “revival” of the late ’90s eventually took Blue Chair from its patrons in ‘96.

Bob Suren opened Sound Idea in the Tampa suburb of Brandon, always something of an under-the-radar hotbed for of Bay area punk and hardcore. He stocked obscure punk from all over the globe (you probably couldn’t buy Green Day or Rancid there) and ran his own label — Burrito Records — out of the space before deciding against compromising his vision for the store in the face of economic challenges. Sound Idea closed in 2008, but threads from similar ethos live on at stores like Steelworker Records, The Vinyl Countdown and Planet Retro Records.

Downtown Tampa was sorta punk at one point, and some of that had to do with Steve Heritage of St. Petersburg’s grindcore pioneers Assück. Heritage operated a record store and venue, 403 Chaos, in the mid-to-late ’90s, where he hosted still-beloved bands like Braid, Joan of Arc, Melt Banana and The Get Up Kids as well as more obscure acts like Jejune, Quadiliacha and Scrotum Grinder. Located at 403 W. Grand Central, the shop (if it were still open) would share the block with swanky lunch spot Oxford Exchange; we would kill to see the Assück crowd mingling with folks prepping for high tea.

As record shops around them dropped like flies, Melanie Cade and Danny Drummond defied convention by opening Mojo Books and Records in the same spot as the old Turtle’s Records & Tapes. In the decade since, they’ve amassed a library’s worth of books and a hearty collection of new and used vinyl rife with great local selections. The shop has also hosted a bevy of artists before they were big (Angel Olsen, Speedy Ortiz, Merchandise).

When Microgroove opened in Seminole Heights, it gave owner Keith Ulrey, a former Vinyl Fever employee,  a chance to bring his own deep understanding of the Bay area music scene (Ulrey and his wife Susie run longtime Tampa record label New Granada) to a Tampa neighborhood that would explode in popularity over the next half-decade. These days the 625-square foot spot is pound-for-pound one of the best places to buy music and a worthy DIY venue that hosts touring and local bands on the regular.

I was born on a Sunday Morning.I soon received The Gift of loving music.Through music, I Found A Reason for living.It was when I discovered rock and roll that I Was Beginning To See The Light.Because through music, I'm Set Free.It's always helped me keep my Head Held High.When I started dancing to that fine, fine...
More

Email us at [email protected]om