On this date in 1987, Florida invented death metal

Today in rock history, headlined by Death itself. 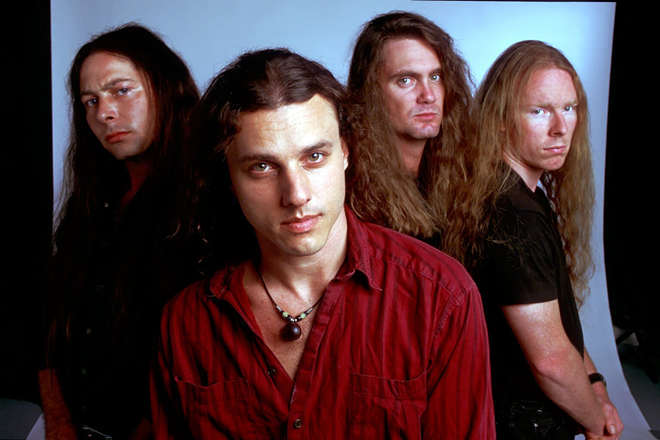 Today in rock history: on this date in 1987, Florida’s own heavy metal outfit Death released its debut album, Scream Bloody Gore. Commonly referred to as the very first album to be deemed “death metal,” the rock sub-genre that the band helped to popularize, the record and the band gained plenty of notoriety for being integral to the death metal movement. Released on the Combat Records label, the album consisted of tracks the band had written earlier in its existence and featured newer compositions as well. All the songs on the record were written by the band’s lead guitarist and vocalist, Chuck Schuldiner, who was often referred to as “The Godfather of Death Metal.” Death would go on to release six more albums which helped bolster the band’s place in the history of death metal and lead to the state of Florida being known as the home of the genre. Sadly, Chuck Schuldiner passed away as a result of a brain tumor in 2001 at the young age of 34.

Today in rock history: on this date in 1998, British group Coldplay put out its very first official release; a three-song single entitled Safety although its more commonly referred to as the “Safety EP”. The songs on the single were originally recorded to be used as demos to shop for a major label contract, but the band and its manager were so pleased with the recordings that they decided to press 500 copies of the EP on CD single format. Most of the singles were given away to record companies or to friends and family members of the band and a very small number remained uncirculated. This release has become one of the most collectible Coldplay items and has been known to fetch thousands of dollars on collector’s markets. The three songs on the single have since appeared on various other Coldplay releases.


Today in rock history: on this date in 1978, the very first solo album from Pink Floyd’s extraordinary guitarist and singer, David Gilmour, was released. The self-titled record consists mainly of rock songs with an emphasis on guitar parts and has a streak of blues influence running through it as well. The record was first released in England and saw its American release a month after the British release date. A moderate success in both countries, David Gilmour reached the Top 20 in Britain and the Top 30 in America and has since been certified as a platinum-selling release with sales exceeding 1 million copies sold. One single was released from the album, “There’s No Way Out of Here.” Although it didn’t chart particularly well in England, it received substantial airplay on American album-oriented rock radio stations. The album displayed the gifted musician’s many talents as a solo artist and featured Gilmour playing keyboards, piano and harmonica besides a variety of guitars. Gilmour wouldn’t release another solo album until his 1984 follow up, About Face.


Today in rock history: on this date in 1983, diminutive but powerful heavy metal vocalist Ronnie James Dio released his first album as a solo artist, Holy Diver. Fronting a new band simply called Dio, the singer was fresh from his short stint as lead singer of legendary metal band, Black Sabbath when he decided to create his own band. Holy Diver was a phenomenal success and was received enthusiastically by Ronnie’s longtime fans as well as by metal magazines around the world. The album achieved platinum sales status in America and is regularly regarded as Dio’s strongest and most consistent work. Besides the title track, another single was released from this metal classic: “Rainbow in the Dark” which received heavy airplay on music video channel MTV which helped album sales. Ronnie James Dio passed away in 2010 but left behind plenty of contributions to the metal genre through his work as a solo artist, with Black Sabbath and, of course, as the lead singer of Rainbow for part of that band’s existence.