Pearls of wisdom from Ziggy Marley 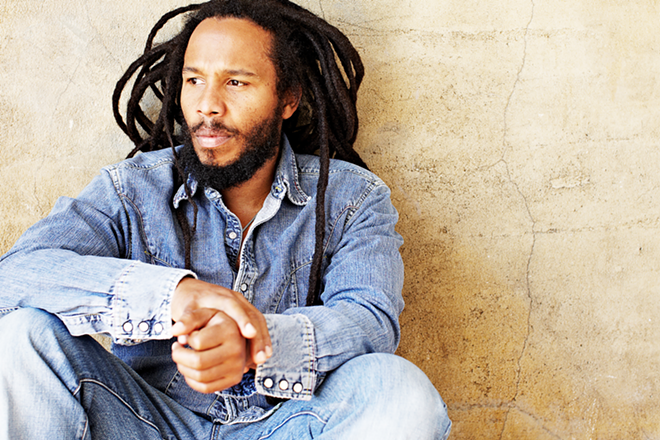 David “Ziggy” Marley is the first-born son of a truly legendary figure in world music history, and while that distinction carries a lot of weight, the 43-year-old artist seems to bear the load with ease. He’s released four LPs of original material over the last eight years, published a comic book (last year’s Marijuana Man), and even spearheaded U.R.G.E — a humanitarian program that improves the lives of children worldwide.

On April 20, the family estate released Marley, the definitive biopic on Bob Marley’s life. CL caught up with the effervescent Marley to talk about the film, his latest album (2011’s Wild and Free), and the trials his dad faced as a result of being mixed race. Have a look at the chat below; Ziggy plays A Taste of Pinellas’ main stage on Saturday.

CL: You’ve been playing reggae music for a good 30 years now. Do you still find yourself learning new things?

Ziggy Marley: We learn through time that reggae is a spiritual music. Music carries a very spiritual vibration, and we strive to keep that in the music whether we do it in the studio or live. That’s what I learn from the music — the more spirit there is in the music, the better it will be for the people. It will create a feeling inside; not just a physical reaction, but a spiritual reaction. Reggae music teach me that.

You’re currently touring behind 2011’s Wild and Free. How has it grown on you since recording and releasing it?

The album is alive on stage — that is where the music is the best. When you play it live, it continues to evolve as a living thing. We’re actually getting ready to put out a live record, which I think is the next evolution of what the album is. It shows the progress that the music and album have made.

You’ve got a comic book, record label, movie, and even a humanitarian group. Why is moving forward and keeping busy so important and where do you get the energy?

Lazy mind, if you’re not doing anything, then your mind become damaged, you have to exercise your mind all the time. It’s like a muscle, the more we exercise our minds and keep creative, then the more the mind will be creative. If you don’t create, then you lose the creative force — that’s just the way we are. Energy comes from just keeping a positive attitude. Understand that what we’re doing has a purpose to it, and that we are given strength by the most high.

The Marley estate caught flack for licensing your father’s image as a brand in 2009. Every decision you guys make in that regard is always bound to be polarizing, but your dad’s message was about love for everyone. Why can’t people just understand that?

I don’t know. We try to do this in a way that respects the legacy of our father. … I don’t really care to put myself in other peoples’ minds and wonder what they’re doing. There are always the detractors and critics. There is some good criticism, too, some criticism to think about — not every criticism is bad. We respect everyone’s point of view.

We tend to become more like our parents as we get older, and you’ve admitted to seeing more of your father in yourself with each artistic leap you take. What are some examples of that?

I can’t really cite specific examples because there are other things that I see within myself, and it’s really on a spiritual level. The physical is there and whatever, but there are a lot of things that are internal that I understand — not external things. So me and my father, we’re connected — we’re spiritually connected.

The Marley biopic is getting unanimously positive reviews. What was (director) Kevin Macdonald able to do that you and your family might not have been able to do without him?

He’s a film director. If you want to make music, then you gotta get good musicians to play the music and a good engineer to engineer the music, and you get a good director to direct the film. Kevin is a good director and when I spoke to him about the film, we both understood how we wanted it done, and I think he did a great job.

The film touches on your dad being mixed race, and how his white relatives rejected him. The world has progressed so much since then, but at times we still seem stuck. What do you think people need to do to free their minds from the chains that are still creating racial, religious, and other kinds of tension between them?

I think each individual has something for that individual — it isn’t one size fit all. People have to look within their own lives and see what it takes. A lot of it is, we are so focused on material gain that the other part of our humanity suffers because of the quest for material things. If we can make material things not so important, then that would be a great first step. If spirituality is the priority, then the material is secondary, and we can start some changes in the world. That is my suggestion, but again, every individual has to find it within one’s self.