A road home: Pleasures' Katherine Kelly Larson on the way out and the way back 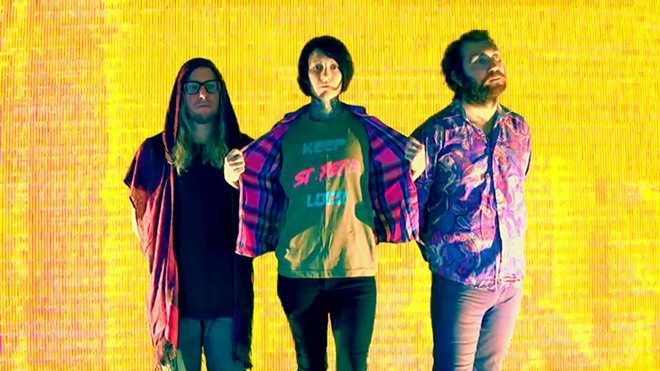 A lot of Katherine Kelly Larson’s existence is centered around taking her bands out on the road.

“It’s fantastic. You get to go do your favorite thing and then you get to leave it all behind the next day,” Larson told CL. Her current band — BOTB-winning psych/synth pop trio Pleasures — is less than one month away from embarking on a 22-date, month-long run that will take it to the Florida panhandle and then through the heartland en route to Denver before decamping to Los Angeles, where Pleasures will play three dates at three different venues. A jog through the desert follows before Missouri and Tennessee dates wrap it all up. That desire to live out of a van, play for strangers, occasionally wash and rinse, and then repeat doesn’t necessarily mean that Larson needs to be alone or away from others though — in fact, it’s quite the opposite.

“I realized that through being OK with telling my story I was just trying to scatter the breadcrumbs to lure in all the other people who could identify with my lyrics and the music we as a band created together,” she said.

“I’m just interviewing people for our gang. I want to find everyone out there who gets it. The idea of the circus that you want to run away with.”

When Larson — who moved back to the Bay area from Boston a decade ago and fronted Sarasota indie-rock outfit Sons Of Hippies for the next five years — talks about telling her story, she’s referencing a 2016 album by Pleasures where she finally used “I” pronouns and wrote love songs about one singular person.

“I didn’t want to be another ‘I’ singer singing about myself and all of my shit. So I was just really self-conscious, but then I realized that people don’t identify with themes as much as when you’re just writing about your own experiences,” she said. “So I think that learning to be vulnerable with the songwriting was a product of coming to the understanding that I never wanted Pleasures to be something people merely observed from a distance, like something so ‘other’ you couldn’t get close to it.”

Lason is about to let listeners in even closer on a new album, Body Pop, which will be celebrated next Friday during an album release show at St. Pete D.I.Y spot Paper Crane. The album was written and recorded by Larson, longtime bandmate Morgan Soltes and new drummer Roger Lanfranchi, who makes his recorded Pleasures debut by contributing drums, synth, percussion, piano and wurlitzer to the seven-track effort. Mark Prator, with help from John Wesley, mixed and mastered the effort at Red Room Studios.

Lanfranchi is the most recent addition to Pleasures and was initially hired to learn songs from older material so that he could play them on a tour that Larson had already booked.

"Being in the band as a permanent member wasn’t even a certainty in my mind at the time," he told CL in a message. As his comfort level grew, and the need for a new album presented itself, his permanence become more of a real thing.

"Seemingly simple personnel swaps can often be a transformational thing, for the music, for everything," Lanfranchi added. "I think this was especially true for us when we went to a three-piece, which forced us to rethink how were were going to pull off a full sound and what changes from each of us would be necessary to make that happen."

Larson said the album exists because the band, now a trio, needed a new representation of itself to bring out on the road and because Soltes — whose musical relationship with Larson goes all the way back to Sons of Hippies — has a million little ideas tucked into his brain and the brain of his synthesizer.

“We’d be like, ‘What do you have Morgan, what do you have?’ And it would just be like a set of beautiful chords like on ‘Chaka Filtration System,’ the way it starts, that whole thing. It would go from there. ‘Speed Trap’ was just like a drum loop,” Larson said of the sparks that start Body Pop’s closing and opening tracks. “That seems to be a formula that works very well for us. All the songs on the album were Morgan’s little kindling.”

"The latitude with which everyone gave for the others’ musical ideas and additions, I think, made writing this record a smooth and rewarding experience for everyone. Each of us played mutually critical roles in writing pretty much everything on the record," he said. "I think we’re all pretty damn proud of it - I know I am."

From all of those smidgens of sound, Larson, Lanfranchi and Soltes created floods of cascading synth, soul-shaking basslines and dark riffs all decorated with lyrics that she half-jokingly said revolve around futility, self-doubt and death.

“Self-doubt is a pretty huge,” she said of some of Body Pop’s pervading themes, which include worthlessness. “It’s interesting because I don’t feel those ways. I feel like I’m pretty good. But the cool part about being an artist is that you get to let older things you might be feeling have a place that’s not in your everyday life.”

Larson gets dark on the violent, tumbling riffs of “A Man Behind The Curtain” (a song she didn’t want to write, “but at that point in time I had to”), lets listeners in on some pain for sprawling, seven-minute cut ““Hesitantly Into The Void” and then really pulls the shades back on album highlight “The Pressure Of Being Alone And Warm At Heart,” a track that on first listen taps into some of the sexual energy from Pleasures’ 2016 album, Fucked Up Dreams Come True, and adds a little tenderness into the mix. Some of that vulnerability often leads to hurt, however, and that’s what Larson sees in “Pressure.”

MUSIC ISSUE 2016
A Q&A with Pleasures

“It was hopeful. That’s true, but ‘Pressure’ to me is like all of the fantastic, but awful things that happen when you are in love with someone. Those things were carried out in a playful way on Fucked Up, but at least on this song, that theme is just different” she said. “You have this wonderful thing where you fall in love, or you love to be with someone. Most of the time you just end up destroying each other’s worlds.”

That darkness ends up being gorgeous on every minute of Body Pop, and sonic tricks like a locked-in heartbeat groove or haunted house synth color the entire effort. Larson — who once lived in abandoned warehouses in Sarasota — will take it on the road like she always does, because, quite frankly, she needs it. But this time she’ll also be looking forward to coming home, a place that didn’t always exist for her.

“Morgan was floating when he joined Sons of Hippies, and I had just broken up with... a horrible phase of my life. He and I were sort of at the same spot,” Larson said. But sometimes people from that gang you meet on the road do end up joining the circus and following you back to where you came from.

“Now I think we’re both comfortable in places that we can call home,” Larson said in closing. “And yes it is really nice.”