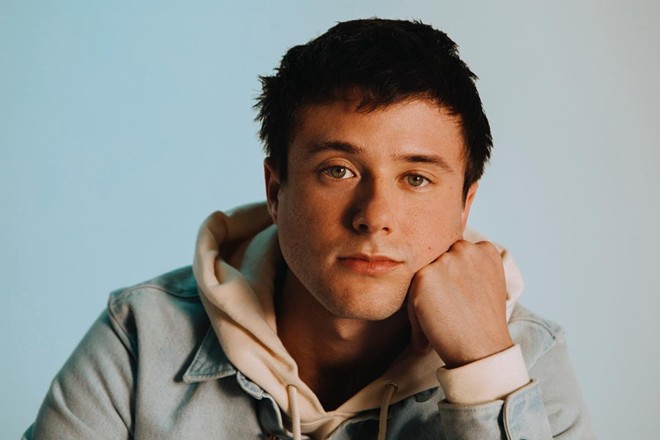 Matty Vogel
Musicians translating their music into different languages isn’t completely unheard of. ABBA recorded “Waterloo” in three different languages, and you gotta love how the Beatles Germanized “I Want To Hold Your Hand” and “She Loves You,” after spending years performing ein Deutschland.

Translations into Mandarin Chinese on the other hand? Name one that you’ve heard.

Enter Alec Benjamin, a 28-year old singer-songwriter currently residing in L.A. The sensation behind “Let Me Down Slowly”—which recently hit one billion streams on Spotify—isn’t 100% fluent, but has translated a few of his songs into Mandarin Chinese, and recently translated and re-recorded one of his albums for release in the somewhat near future. His fascination mainly came about due to his father blending Chinese culture into his work.

“He's a medical doctor, but he also does acupuncture, and he does stuff with Eastern medicine," Benjamin told Creative Loafing Tampa Bay during a recent phone interview.

Benjamin’s songwriting style is completely straightforward and honest, and tackles subjects from moving out of L.A. (“Shadow of Mine”) to sometimes having to play a role in life that you’re just chained to (“DeNiro”). “And even if you're not necessarily pleased with your casting, you have to do the best that you're given,” he advised.

In the beginning, Benjamin played the difficult role of a kid entertaining people in line for arena concerts such as Shawn Mendes, and handing out business cards. And Columbia Records execs dropping him just after he turned in his debut album definitely didn’t boost his confidence. But these days, he's an Elektra signee whose career got the surge it needed when a kid danced to “I Built A Friend” on “America’s Got Talent” in 2017.

Get our full Q&A with Alec Benjamin below, and go see him at St. Petersburg's Jannus Live on Tuesday, Sept. 13, with support from Claire Rosinkranz.
Hey, Alec. How are you doing?

I'm great, thanks for taking the time today. Appreciate it.

Are you in California?

Awesome. Getting ready to kick off the tour, huh?

Yeah, I'm getting ready. I was rehearsing all during the week. Then I’ve got some rehearsals next week and the following week, and then we start.

Sweet deal. So, this tour is promoting the new (Un)Commentary album that you've got out. How much of it would you say is based on true events?

Well, I suppose all of it. I wrote this album during the pandemic, and a lot of it is talking about things that happened during the pandemic. And then, even the stuff that I talk about that’s like a story that's fictional, it's based on things that have actually happened, and I'm trying to get across an idea or like, an emotion that maybe was inspired by a true event. But even if I'm not necessarily talking about the actual event itself in the song, in most of the songs in this record, they’re pretty literal. Like, I have a song called “Nancy Got A Haircut,” about Nancy Pelosi getting a haircut, and it’s a true story.

Haha, that’s awesome. Would I be correct in assuming that “Shadow Of Mine” was inspired by your move to L.A.?

In part, but it was more inspired by my move out of Los Angeles. I've been sort of slowly, sort of exploring like, moving to new places and stuff for multitude of reasons. One of which was developing a lot of bad habits and a lot of things that I'd like to leave behind here. I might move to Florida soon, and so I went down to Miami. I went down to Texas for a little bit, and I realized that even though those are places that I might want to live ultimately, I'm not going to be able to escape a lot of the problems that I feel like I'd like to leave behind in Los Angeles.

Yeah, Miami and Texas seem like good places to visit, but from up close, maybe not somewhere to live for some people.

Sure. I mean, maybe one day I’ll move there, but regardless, it doesn’t matter where I go, whether it's Miami or Texas, or whether it's Alabama or wherever. I have to move to a place because I want to move to the place, not because I feel like escaping some of the things that were bothering me in my previous residence.

So speaking of things that bother you, there's a song on the record called “Older,” and you've been opening your shows with it. What makes that the ideal show opener?

It was a great show opener for the last few shows, but on this tour, the setlist has changed, so it’s not gonna be the show opener this time. Hopefully, the song we picked to be the set opener is gonna be the more ideal set opener, but I think, when we put it in the set as the tour opener, the album wasn't fully out yet, I had a few singles out, and “Older” was one of the things that I had just released, so it made sense at the time to have that as a set opener. We tried it and it worked, so we kept it in, but it's gonna be different this time.

Right on. So I want to go back a little bit. You have not been a music person for your whole life, but some of your inspirations include Paul Simon and Eminem. What parts of their artistry touch you the most?

I just like their lyrics and I like their ethos as artists. I like what they have to say. I don't always agree with them, but I like that they take a stance and they're bold. And I love how they are able to tell stories in their music. And that resonated with me as a young kid, and it resonates with me now as an adult.

That's cool. So, the story goes, you were signed to Columbia Records, you made a record and then they dropped you. And currently the record you made for them is still being held hostage and you can't share them right now. Can you tell me anything about what the record was like?

Yeah, yeah. It took me a few years, but ultimately, I got the album back and I put out some of the songs. So, one of the songs was a song called “Water Fountain,” And I had a few other songs that I ended up putting out on my first album that made it back, but no, it's not being held hostage. It ultimately had a happy ending.

Well, that's good that you got it back. Do you ever look back on that record and think about how far you’ve come as an artist?

Yeah, I do. I feel like I’ve grown a lot, but in a lot of ways. I also sometimes envy the person that I was at time, because it's nice to be sort of like, young and naive, and not as worried about things, and you're able to create more freely. So I kind of miss that.

Fair enough. I really liked the Mandarin Chinese translations you did for a few of your songs. What made you decide to do that? Are you fluent?

I'm fluent enough to do that. But no, I had a lot of help making the translations. I didn't do the translations, I had a friend help me, but I just thought it was something that I was always interested in doing. I've actually translated my entire album into Chinese, and we just got done recording last week, so that was really cool.

And didn't your dad blend Chinese culture into his medical work?

He does. My dad is integrative medicine. He's a medical doctor, but he also does acupuncture, and he does stuff with Eastern medicine, so that’s one of the reasons I got into it.

Moving on, I read that you met John Mayer through Instagram. Did he know who you were at the time?

When I first sent him a DM on Instagram, I don't think he knew who I was when he didn't respond. And then, he sort of found my music and he messaged me. I think he saw the previous messages that I had sent him. But yeah, he was looking for me. Someone showed him my music and that was the medium through which he was able to reach out to me.

Have you heard his latest, Sob Rock?

Of course, yeah. Have you?

Oh yeah, one of his best in years, I think.

That’s a hard one…I’m gonna say “New Light.” What about you?

Oh yeah, that’s good. I like the song “Wild Blue.” That’s a great one.

Hell yeah. One more question for you: When you play your songs for friends and family for the first time, do they give you constructive criticism? Whose do you trust the most?

I have a couple of friends that I feel like will be honest with me. I think other times, I just put my friends in an uncomfortable position because they don't want to disappoint me, especially if they can tell I'm excited about something. They don’t want to be the ones to sorta let the air out of the balloon and tell me that it's not as good as I think it is. But my mom has no problem telling me the truth, which is good, having people in your life that are going to be honest with you. So I talk to my mom and I play her the songs, and if she likes the song, then I know that there's a good shot that it’s gonna resonate.

*This interview has been edited for clarity*