A GoFundMe has reached its goal, but have you seen these guitars?

Nicole Abbett
Come Back Alice plays Hulaween at Spirit of Suwannee Music Park in Live Oak, Florida on October 29, 2016. Tony Tyler and Dani Jaye's Les Paul guitars were both stolen from the couple's home this week.

“If it wasn’t for bad luck,” bluesman Albert King famously sang back in ’67, “I wouldn’t have no luck at all.”

Bay area guitarist Tony Tyler’s pretty sure he wasn’t “Born Under a Bad Sign” (that’s the name of the classic King tune), but lately it seems like something’s been hanging over his head.

Tyler is the charismatic and gifted lead guitarist and singer for the “southern gypsy funk” band Come Back Alice. On Sept. 11, he and the band – which includes his wife, violinist Dani Jaye - were in Marshall, Missouri after playing a show.

“Our garage at my house in St. Petersburg is a little bit prone to flooding,” Tyler explains. “So we’d moved a bunch of our equipment over to the studio, so it would be safe from the hurricane.

“It was weird hearing about Tampa/St. Pete on the news. We were praying, and thinking about our family and friends down here. And hoping that everybody would come through OK.

“I woke up with a couple of text messages from a buddy of mine. There was a picture of our studio and the roof had caved in.”

“We had brought one guitar amp and Dani’s fiddle amp to Missouri with us,” says Tyler. “Everything else was backlined at the gig.”

Like most struggling musicians, Tyler and Jaye don’t carry insurance.

The kicker here is that Tyler’s Gregg Allman-inspired B3 playing is a high point of every Come Back Alice show. But the extremely weighty organs have remained in the studio-slash-rehearsal space since the band’s trailer was rear-ended in early 2016. They’ve have no way to carry them around; subsequently, they were at Hurricane Irma’s mercy.

Wait, it gets worse.

“We come back, and we’re dealing with the whole studio thing,” Tyler says. “I had a meeting with a guy about getting some of the p.a. gear replaced. It was about 9:30 in the morning, I come out, and the passenger window to my Excursion is busted out in my driveway.

“And all of my guitars are gone.”

“They got an off-brand blue sparkled acoustic, too, and all of our microphones.”

He was making an album in Bradenton in 2009 when he met Dani Jaye, who was playing in a band called One Night Rodeo. It was love – both musically and professionally – at first sight. And he’s been in the area ever since.

Today he’s down – but nowhere near out.

Contributions to a GoFundMe page Tyler and Jaye established after Big Irma’s house call has already met (and doubled) its stated goal.

Then there’s the matter of replacing the guitars.

“My daddy got me that guitar when I graduated from high school,” Tyler says. “I’ve been all over the country with that thing. Played with countless artists, on countless stages, with that guitar. It’s a blow, but the response we’ve gotten from people has completely overshadowed the sorrow.”

In the meantime, sessions for the second Come Back Alice album are ongoing.

With borrowed equipment, the band will take the stage Saturday at the Skipper’s Smokehouse Anniversary Party. “We’ve just been shown so much love,” Tyler says. “However angry I am that all my guitars got stolen, or that the hurricane took the studio, it reminds me of the goodness of people. As bad as it is, that’s the little bit of good that’s come out of it.”

You can bet they’ll tear it up, as they always do, at the Skipper’s gig. “Rock ‘n’ roll doesn’t die, it keeps going,” observes Tyler. “There’s been worse that’s happened to people, and they keep going.”

Nicole Abbett
Come Back Alice plays Hulaween at Spirit of Suwannee Music Park in Live Oak, Florida on October 29, 2016. Pictured is Dani Jaye with her Les Paul guitar, which was stolen from the her home this week. 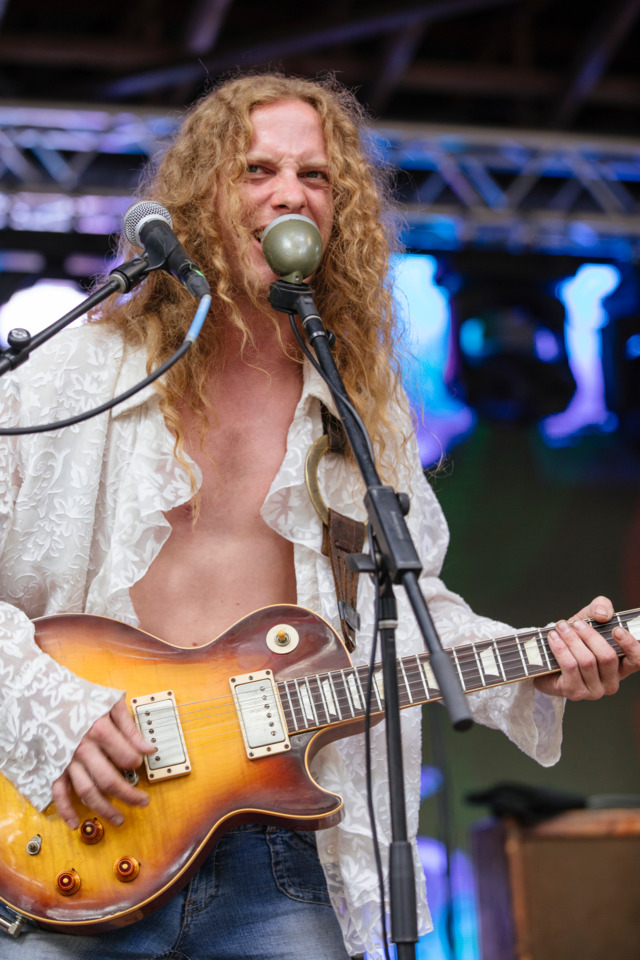 Nicole Abbett
Come Back Alice plays Hulaween at Spirit of Suwannee Music Park in Live Oak, Florida on October 29, 2016. Pictures is Tony Tyler with his Les Paul guitar, which was stolen from his home this week.
click to enlarge

Come Back Alice
Tyler onstage with his custom-made Kraster, also now in the hands of thieves.

Bill DeYoung was born in St. Pete and spent the first 22 years of his life here. After a long time as an arts and entertainment journalist at newspapers around Florida (plus one in Savannah, Ga.) he returned to his hometown in 2014.You’ll find his liner notes in more than 100 CDs by a wide range of artists including...
More
Scroll to read more Local Music articles
Join the Creative Loafing Tampa Bay Press Club