Review: A chatty Dwight Yoakam barrels through swinging St. Pete show, lauds Florida for ‘getting back to living’ and live music

A superb four-piece band helped him play a barrage of hits and well-chosen cover songs, too. 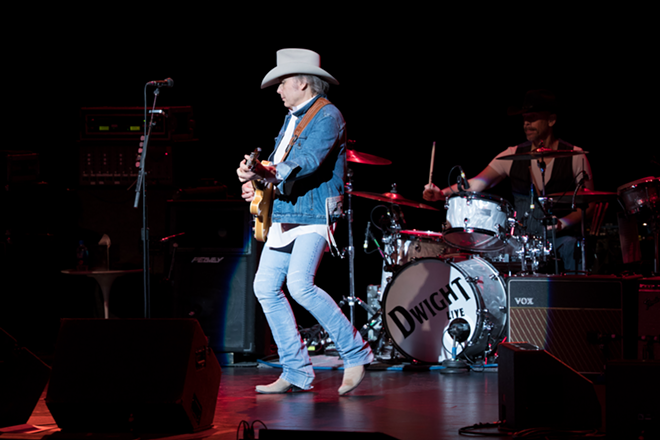 Kamran Malik
Dwight Yoakam plays Mahaffey Theater in St. Petersburg, Florida on March 5, 2017.
Donning his trademark low slung cowboy hat and skintight blue jeans with frayed cuffs, country music superstar Dwight Yoakam lit up the stage at Clearwater’s plush Ruth Eckerd Hall on Thursday night. Sporting a cool denim jacket encrusted with sparkling rhinestones on the back, the veteran honky tonk singer (and part-time actor) brought along his superb four-piece band to help him barrel through his barrage of hits and some well-chosen cover songs, too.

Taking the stage without introduction or fanfare, Yoakam and his crew instantly plowed into a rousing cover of The Carter Family’s “Keep on the Sunny Side” and immediately set the tone for the rest of the long night of music. Without missing a single beat or uttering a word, Yoakam steamrolled through four numbers before coming up for air. Included in the non-stop blast was his razor-sharp version of “Little Sister,” a song popularized by Elvis Presley in 1961 as well as Yoakam’s scintillating slice of lighthearted Tex-Mex fare, “Streets of Bakersfield.” That song, originally recorded in the 1970s by another country music legend, Buck Owens, was a hit for Yoakam in 1998 when he Owens recorded it as a duet. On this night, Yoakam handled all the vocals himself and, alongside multi-instrumentalist Brian Whelan’s snazzy accordion work, the number served as an early frontrunner for the highlight of the evening.

Wiggling his legs while strumming his guitar, Yoakam was in fine physical and vocal form and was poised to make this a solid night of his own brand of honky tonk rock and roll. His in-between song silence was broken, however, when he delivered a heartfelt reflection on his elation for returning to performing after a long pandemic-driven absence. Indicating his joy for “playing live music for a live audience,” Yoakam applauded our home state for “leading the way” for the country and “getting back to living,” no doubt his way of offering support for Florida’s wavering dedication to mask mandates and to its hesitancy to go into lockdown. Despite his oration being a little indiscernible, the singer nonetheless garnered a smattering of applause from across the nearly sold-out venue.

Further drifts into between-song dialogue included hearty praise for late country great Merle Haggard (before dipping into Haggard’s catalogue for a couple of numbers) and a hilarious account of a conversation once had with another legend, Willie Nelson. The anecdotes added color to the show and showed off Yoakam’s often subdued personality. The momentum was lost, however, when the singer dove into a long and highly-detailed account of his early days as a budding musician in Los Angeles and his trials and tribulations while playing the club circuit during those lean years. What could have been a fond, brief, succinct recollection expanded into a lengthy, somewhat tedious chronicle and spilled over into constant, spoken interruptions during his performance of his 1989 top 10 hit, “I Got You.” Yoakam even stepped outside himself for a moment and acknowledged his own chattiness: “I used to get criticized a lot for not talking during my shows but now, I’m a blithering idiot,” he joked.

Delving back into his arsenal of bonafide hits and laying off the spiels, Yoakam delivered faithful versions of ballads “Ain’t That Lonely Yet” and “You’re the One” alongside barnburners “Little Ways and Guitars, Cadillacs” and did so with his trademark style and subtle coolness. Lead guitarist Eugene Edwards did plenty to inject lots of flash to the performance; between his sparkly sequined jacket and his tasty guitar work, he stood out tremendously and generated plenty of audible audience approval on his own. Making a couple of separate references and marveling at the recently released Beatles documentary “Get Back,” Yoakam briefly broke into the Fab Four’s “I Got a Feeling” before serving up his encore—a superb cover of another song popularized by Elvis Presley, “Suspicious Minds.”

The two-hour show reminded local fans of the incredible number of country music hits Yoakam has racked up since his debut album appeared in 1986. His choice of songs to cover is always wise and well-suited, and this night’s offerings proved his knack for selecting the right songs to adopt and introduce into his performances. Yoakam’s show soared when he stuck to his vast catalogue of fine compositions and well-thought out covers but seemed to drag a bit during his ventures into chattiness. Nonetheless, Yoakam more than proved that he’s still one of the absolute best and most enduring country music artists to emerge since his mid-’80s arrival on the scene and his unwillingness to bend or conform to any trends or fads and that’s the real reason why his faithful followers still strongly support him.

Setlist
Keep on the Sunny Side
Please, Please Baby
Little Sister
Streets of Bakersfield
The Bottle Let Me Down
Swinging Doors
Up Against the Wall, Redneck Mother
Okie from Muskogee
I Got You
I’ll Be Gone
Blame the Vain
You’re the One