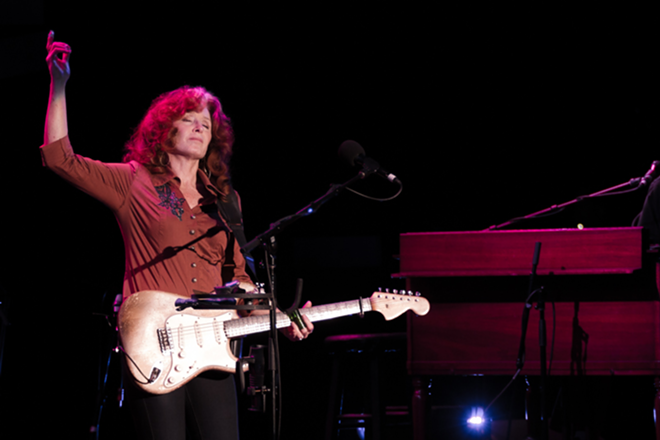 Veteran artists — those with 40, 50 years in the biz — know they walk a tightrope when trying to cram too many songs from a new album into their set lists. Baby-boomer audiences ain’t havin’ it. It’s like: Hey, I paid my 70 bucks, now play stuff I know! [Words by Eric, photos by Tracy.]

Bonnie Raitt did not have that problem Tuesday night at Ruth Eckerd Hall. She performed a generous five songs from her most recent disc, 2012's Slipstream, each of which earned enthusiastic responses from the crowd. Why? Basically, because Slipstream is terrific.

The same can be said about her nearly two-hour concert in front of an adoring packed house in a 2,200-seater she clearly loves to play. Terrific.

The 64-year-old singer and slide guitar wizard, backed by a simpatico four-piece band, was in a relaxed mood, what with her long tour nearing its end.

Raitt concerts are more apt to work your tear ducts than make you shake your ass. There is perhaps no better ballad singer currently working. She performed several — among them the linchpin “Angel From Montgomery,” Richard Thompson’s “Dimming of the Day” and a couple of Dylan songs from Slipstream: “Standing in the Doorway,” and the swaying, acoustic-driven “Million Miles,” a tour de force. In each instance, Raitt contoured the vocals; she reached for heart-wrenching blue notes, stretched lines, compressed phrases, murmured asides, effectively rendering the songs at once familiar and fresh.

Raitt’s top tear-jerker moment came when she emerged for an encore, sat on a stool with an acoustic guitar and immersed herself in “I Can’t Make You Love Me,” one of the most moving songs about loss I can name.

Her band is more supple than aggressive, and the uptempo tunes — notably the funky “Love Letter” and radiant “Not the Only One” (where she was joined by Paul Brady, the song’s writer and the evening’s opening act) — glided along with swagger and swing.

On this night, Bonnie Raitt proved yet again that she is an American master.