A look back at the show on Sat., May 21, with photos included.

"You meet the coolest people at Chuck Ragan shows." That's what the guy said to me in line outside of Crowbar on Saturday night. He dropped a quote from Highlander, I responded. That's how people make friends at shows, right? He had a Lagwagon hat on. It was a relic from the days when names like Hotwater Music, Avail and Lagwagon all usually came up in the same sentence.Inside, it was hot, jammed elbow to elbow with people, teeming with red lights, with the barest undercurrent of air that wasn't much better than the grinding humidity on the patio. But there was beer and spirits. That's all you need, really.

The bleary guitars and sundering percussion of local openers Brother Cephus certainly stood in stark contrast to the rest of the show in tone, but not necessarily lyrically or in spirit. They possessed an absolute honesty and humility that felt neither ironic or forced, their tight instrumentation underscored by some creative tremolo work that could be both subtle or relentless, they never faltered in delivering finely-harmonized vocals (a complementary dichotomy of raspy and clean intones), and allowed just enough space to allow each song to breathe. Their set was short, but definitely left an impression.

Tim Barry followed in a camo hat. You can tel he's the sort of dude who believes every word he says, because he introduced himself by spitting on the stage and greeting us with a blunt, "How the fuck are y'all doing?" Definitely punk rock. After a roaring opener in "Dog Bumped," Barry brought the mic stand into the audience and was instantly enveloped in a circle, fists that clenched cans of PBR pumping the air with every chorus. Barry's soulful acoustic style embodies a brand of Americana that's hard to pinpoint. His lyrical content is desperate but often humorous. Barry solidified his set with a line that likely stuck with everyone who showed up to Crowbar that night: "Don't be afraid to die, be afraid not to live." Without any pretension or encore, Barry closed out his performance to a roar of applause.

Ever the humble showman, Chuck Ragan appeared with his band shortly after. A living legend and the voice behind Hot Water Music, his band helped dictate the narrative of emo and post-hardcore in Florida, Ragan is writing an epilogue of sorts. With heartfelt finesse, Chuck plucked at his guitar while bandmate Jon Gaunt bowed a fiery fiddle behind him, looking as if possessed. From start, every line and measure of Ragan's hoarse crooning was wrought with a tension that only a life truly lived can bring. A feverish spell fell over the crowd. Ragan and company ran through a near non-stop set of songs, barely pausing. In one of the brief down moments, Ragan expressed his gratitude and divulged that HWM is working on new material before launching into what might have been the best rendition of "Drag my Body," ever.

Overall, an unforgettable showcase of honest music from the heart from three fine folk-turned talents. 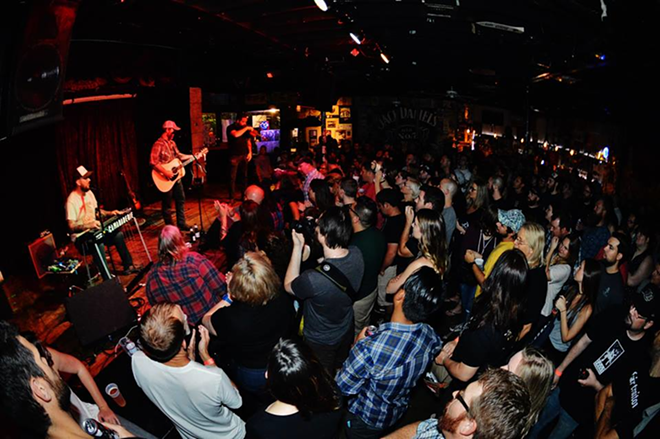