Photo by Josh Bradley
Elton John plays Amalie Arena in Tampa, Florida on April 24, 2022
Saying goodbye is never easy. Having to bid farewell to the artist whose work and art ignited my love and appreciation for music as an elementary school-aged kid was not easy. But that’s exactly what myself and all 16,000 fans in attendance for Elton John’s supposed last pass through the area did on Sunday night (he said his last show would be the final bow) at a sold-out Amalie Arena.

No stranger to dazzling, visual performances, for many, Elton John pioneered the art of ornate costumes and stunning stage design. Steadily touring since the opening of the 1970s, John, who just turned 75, didn’t disappoint in the area of pure flash for this, his last go-round. Kicking off his performance minutes after its advertised start time, the evening began with dramatic, swirling spotlights and the pre-recorded sounds of the intro of his 1975 version of The Who’s classic “Pinball Wizard.” After Elton and his six-piece band made their way to their places, high resolution images began to dance across the massive video screen at the rear of the expansive stage. To open the vast musical catalog, he’d sail through for the evening, John launched into the 1973 “R&B”-tinged classic “Bennie and the Jets” which was met with a rousing ovation from the audience.

Clad in a long-tailed tuxedo jacket encrusted with colorful gems and stones and bearing his first name across its backside, John was in fine voice for the opening number. Now singing in a lower, deeper range than what longtime listeners might be used to, the singer’s inability to reach the higher-pitched vocal peaks he once did was made up for by his dominating, often soulful tones. Never was this more evident than on his dusting off “Border Song,” a nugget from his 1970, self-titled album. The gospel-inspired tune was covered by the great Aretha Franklin and turned into a hit single not long after John released it as his debut single in America. In commemoration, he told a touching story about his kinship and admiration for the late Queen of Soul prior to unleashing his inspired performance of it and dedicating it to her.

Of special interest to longtime fans was the inclusion of several veteran members of John’s band. Drummer Nigel Olsson, percussionist Ray Cooper, and lead guitarist Davey Johnstone were all key players throughout Elton John’s rise to superstardom in the ‘70s, so their presence was especially apropos for this final jaunt. Johnstone’s loud, clear guitar work was featured prominently throughout the 22-song setlist but shone particularly brightly when one of the night’s jaw-dropping nuggets was performed; a pristine version of the deep album cut, “Have Mercy on the Criminal” which originally appeared on 1973’s Don’t Shoot Me I’m Only the Piano Player.
click to enlarge 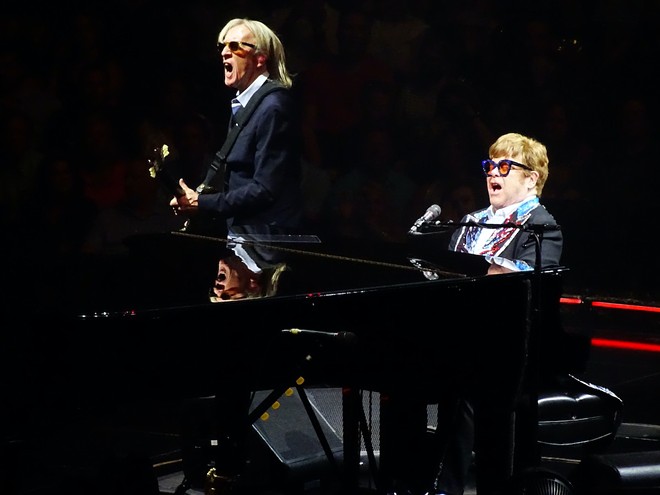 Photo by Josh Bradley
Elton John plays Amalie Arena in Tampa, Florida on April 24, 2022
John’s extensive career and various musical phases are usually represented faithfully throughout his shows. Despite being the creator of one of rock music’s most impressive and enormous songbooks, John typically plucks tunes from various decades to appease everyone in attendance from the diehards who were with him at the beginning to those who discovered his music via his latter, Disney film soundtrack work. This tour’s setlist, however, is made up of songs from his classic work from the 1970s with occasional forays into his ‘80s output. It’s hard to argue song selection and inclusion when considering the quality and the magnitude of the numbers that made the final cut for this tour.

Hearing Elton John’s sparse and joyful piano chords solely resonate throughout an arena to open “Tiny Dancer” is enough to choke up many of his dedicated followers. The memories and emotions that overtake listeners who’ve grown up listening to John’s records throughout their lifetimes are inexplicable yet impossible to ignore. Aided by a conceptual film that played while that cherished number was performed, I must believe that most in attendance were independently flashing back to a time and place where that 1971 song personally takes them and reveling in the sheer beauty of it and of John’s exquisite performance of it on this night.

In representation of his resurgence in the 1980s when MTV-era fans discovered him, John’s setlist featured favorites like “I Guess Why They Call it the Blues” and “Sad Songs (Say So Much).” While both were received warmly, their reception paled in comparison to the arrival later in the night of the jaunty “I’m Still Standing.” Highlighted by a cleverly composed highlight reel that flashed video images of various eras throughout his lengthy career, the song became a jubilant sing-along affair for everyone in the house.

While not as spry or physically energetic as he once was, John remained seated on his piano bench for the bulk of the night with a few exceptions. He occasionally rose to greet the audience and to speak but remained sedentary for much of the two-and-a half-hour show. A mobile platform did transport him from one side of the stage to the other while seated at his piano, but his lack of physical activity had no effect on the level of musicianship and musical dominance he owned throughout the night. A costume and eyewear change came later in the set but overall, it was the music and the breathtaking video images that rightfully dominated the performance. Some of the videos were more effective than others; the hilarious, campy, drag queen catfight film that was beamed during “The Bitch is Back” fun and the sultry scenes of a Marilyn Monroe lookalike during “Candle in the Wind” were classy. The computer-generated images of phony-looking flames that engulfed the singer’s piano during the bold “Burn Down the Mission” were unnecessary though.
click to enlarge

Photo by Josh Bradley
Elton John plays Amalie Arena in Tampa, Florida on April 24, 2022
Of regional note, John touched on some trivia and historic tidbits relating to his connection with Tampa. Revealing that this was his 36th career show in the area and his 79th overall in the state of Florida, he singled out his debut appearance on a local stage which occurred on May 28, 1971, at the long-gone Curtis Hixon Hall, just down the road from the hockey arena that housed this performance. It was one of many spoken recollections Sir Elton made throughout the show that seemed to stir up particularly melancholy emotions within him. Reminiscing about his fondness for America and the warmth the States have provided him with for so long, John spoke proudly recalling that “America was where my career took off” and expressing his thanks for the “kindness, dignity, loyalty, and love” the country has always shone on him. He thanked and singled out those who’ve been fiercely loyal to him and pointed out those in attendance who’ve seen him multiple times throughout his career.

Adding to the many historical highlights he’s celebrated, John mentioned his appreciation for still being able to lead a thriving career. After launching into his current hit single at the evening’s encore, the thumping, dance hit “Cold Heart,” a duet with young British diva Dua Lipa (whose contribution came via video accompaniment), John got sentimental again. “Having a hit record at 75 is a big thrill. That was my latest hit and here’s my first hit” he said before delivering a gorgeous reading of his signature song, his 1970 “Your Song” which helped to reiterate his longevity and his dominance of pop charts for the last 50 years.

To close this, his final Tampa concert, John ended with “Goodbye Yellow Brick Road,” the title track from his 1973, 2-LP masterpiece album. The familiar tune became a sing-along for all in attendance and seemed like a fitting but emotional close to the night. At the conclusion of the final number, John stepped onto a small platform that lifted him and carried him backward onto the rear of the stage which appeared to look as if he was being pulled into the video screen. Just then, an image appeared on that screen, featuring the singer, clad in the same track suit he donned for the final number, walking onto a yellow brick road. It was a classy, tasteful, and sentimental finale for this marvelous night of music and memories.

Set List
Bennie and the Jets
Philadelphia Freedom
I Guess That's Why They Call It the Blues
Border Song
Tiny Dancer
Have Mercy on the Criminal
Rocket Man (I Think It's Going to Be a Long, Long Time)
Take Me to the Pilot
Someone Saved My Life Tonight
Levon
Candle in the Wind
Funeral for a Friend/Love Lies Bleeding
Burn Down the Mission
Sad Songs (Say So Much)
Don't Let the Sun Go Down on Me
The Bitch Is Back
I'm Still Standing
Crocodile Rock
Saturday Night's Alright for Fighting
—
Cold Heart
Your Song
Goodbye Yellow Brick Road