Review: In Clearwater, Brian Setzer dusts off Christmas classics and his own big tunes, too (w/photo + setlist)

Plus a playlist to make you boogie. Christmas came a little early to Ruth Eckerd Hall his year…and it came wrapped in a shiny, sparkling, rockabilly and swing drenched package. The Brian Setzer Orchestra’s Christmas show dazzled a nearly sold-out crowd Tuesday night and put each and every person in the theater, young and old, in the most jovial holiday mood thanks to Setzer’s effervescent presence, his massive big band and his guitar playing. Oh…that guitar playing.

There aren’t a whole lot of guys who can do what the great Brian Setzer does…OK, no one can do what the charismatic, ear-to-ear grin wearing New York Native can do. An ace guitarist since his early days with 1980s rockabilly revivalists The Stray Cats, Setzer, still a young dude at 58, has gotten better, slicker and more rousing with age. His performance before his dynamic big band, which celebrate its 25th year together, served as a fine snapshot of the many tools this guitar wizard has in his endless arsenal — and it touched on every possible highlight of his lengthy career, and then some.

A stage filled with illuminated Christmas trees, statues of snowmen and Santa Claus and a smattering of wrapped gifts came alive when a 13-piece horn section, two elegantly-dressed female backup singers, a drummer, a pianist and a stand-up bassist took their places…but the real ovation came when the man of the hour stepped out to greet his adoring crowd. Dressed in a dapper black suit and with his trademark blonde pompadour standing tall, Setzer and his crew got the party started with a snazzy version of the Glenn Miller Orchestra nugget, “Pennsylvania 6-5000.” Brian’s always in fine vocal shape, and this night was no exception. He’s as comfortable crooning a cool swing tune as he is snarling out a red-hot rockabilly rocker as he proved all night while zig-zagging through styles and genres.

Bouncing jovially through Christmas classics that would warm the heart of even the worst Grinch, Setzer poured it all out as he scampered from side-to-side of the stage flashing his many gorgeous Gretsch guitars and making them wail. There was a flashy red one, a metallic green one and, of course, his trademark big orange one that’s a familiar sight for longtime fans.

“Florida! It’s been a while…Let’s get this place swingin’!” Setzer exclaimed early on, referring to his long absence from a local concert stage and, with that, he lit the place up. 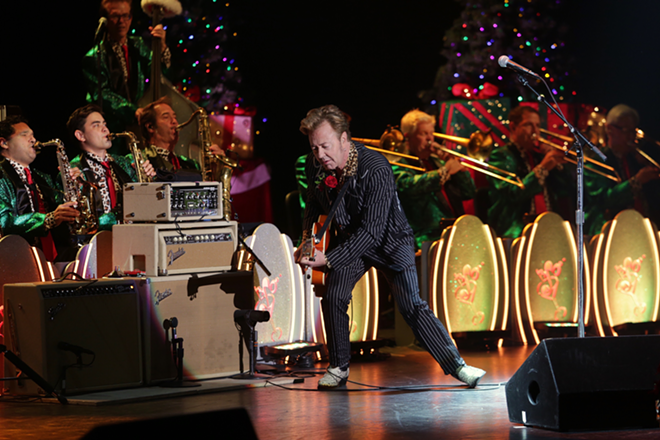 “I gotta warm this old guitar a little bit” he coyly said before ripping into the blues-soaked swagger of “Stray Cat Strut” which elicited plenty of audience participation and became a sing-along. And that’s how the program went; for nearly 95-minutes, Brian Setzer juggled holiday classics, rockabilly rave-ups, swing numbers and some surprises, too. In a nod to recently deceased musical legends, he even threw the crowd back-to-back nods to Glen Campbell and Florida’s own Tom Petty by delivering a solemn, heartfelt rendition of Campbell’s hit “Wichita Lineman” followed immediately by a revved up version of Petty’s barnburner “Runnin’ Down A Dream,” which both drew hearty applause. A spoken tribute or a eulogy wasn’t needed…Brian let the music do the talking — a tactic that was clearly more effective. A gaping void was left by the head-scratching decision to not honor rock and roll architect Chuck Berry within this memorial of sorts as Berry clearly had to be a huge influence on Setzer and his style of playing.

But all was forgiven when the encore came about which found the large ensemble tackling a jaw-dropping rock and roll-inspired take on Tchaikovsky’s “Nutcracker Suite” that included participation from every person on the stage and featured some handy conducting from Setzer throughout the selection. As noted earlier, this guy can do it all.

The loudest and heartiest responses came when Setzer unleashed his most recognizable hits, namely his rockabilly standout “Rock This Town” and his hit version of the Louis Prima swing classic “Jump, Jive an’ Wail” during which most attendees spontaneously leapt from their seats and did a little dancing of their own.

With Christmas still several weeks away, this Tuesday night escapade into the Brian Setzer Orchestra’s holiday world was the perfect way to get everyone in attendance in the spirit…and make them rock and dance in the aisles while awaiting.

The closing, rocking version of “Jingle Bells” made sure of that. With Setzer feverishly pacing the stage, a real life Santa coming out to dance onstage and faux snow falling from the ceiling, the theater was transformed into a real Christmas wonderland thanks to the cheerful vibes Setzer and his big band conjured onstage for this very special night.

Rockin' Around the Christmas Tree

Angels We Have Heard On High

Runnin' Down A Dream

The Christmas Song (Chestnuts Roasting on an Open Fire)

I Got a Rocket in My Pocket