Review: Lyle Lovett and band, plus their tour bus driver, give Clearwater another set of masterful Americana

The dapper Texan let all his true talents shine, and gave his accompanists plenty of opportunities to do the same. 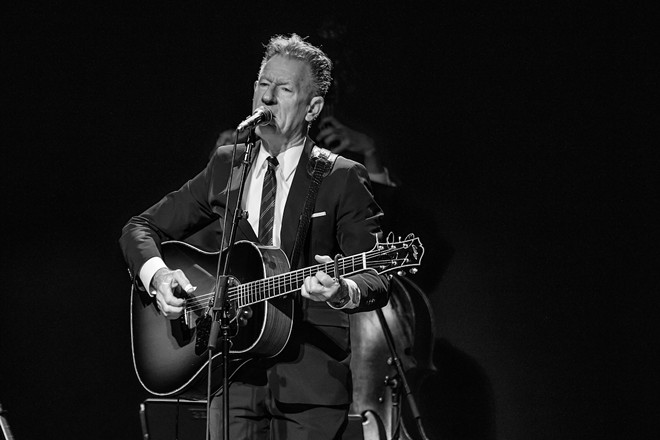 Photo by Caesar Carbajal
Lyle Lovett plays Bilheimer Capitol Theatre in Clearwater, Florida on March 12, 2022.
At the first performance of a two-night stint at Clearwater’s superb Bilheimer Capitol Theatre, veteran singer-songwriter Lyle Lovett delivered an absolutely stunning performance to a captive audience. Alongside his four-piece acoustic group last Saturday, the dapper Texan let all his true talents shine, and gave his accompanists plenty of opportunities to do the same.

Without an opening act, Lovett and his group walked out to a darkened stage and let upright bassist Viktor Krauss unleash the first notes of music for this lengthy show. As a spotlight then shone on the group’s leader, Lovett, dressed in his traditional smart black suit and tie, lent his vocals to a stunning, bare bones version of the Walter Hyatt-penned “Babes in the Woods,” a selection from Lovett’s 1998 album celebrating the work of fellow Texas songwriters, Step Inside this House. In fine voice, Lovett’s recognizable, pining baritone sounded fresh and full and only hinted at what the audience had to look forward to for the evening. Of the many showstoppers that filled out a setlist that highlighted all eras of his long career, it was arguably his extraordinary reading of 1989’s “Here I Am” that was most impressive. The song’s hilarious spoken lines, mixed with its ringing chorus laid atop jazz passages is the perfect encapsulation of what makes Lyle Lovett a truly unique and ingenious artist.

Front and center among his group members who also donned suits and ties, the ensemble naturally and flawlessly alternated between the outright blues of “My Baby Don’t Tolerate,” the traditional bluegrass of “Head Over Heels” and the gospel strains of “Church.” Lovett and his incredible group showed off its range and versatility in grand style, both collectively and individually. Ace, award-winning fiddle player Luke Bulla had plenty of opportunities to layer his impressive playing into the night’s selections but got the chance to take lead vocals on his adaptation of the traditional tune “Temperance Reel.”

It wasn’t just the members of Lovett’s amazing onstage musicians that had the chance to show off their chops; band bus driver and former gospel musician himself Denny Autry was asked by Lovett to join in, too. In one of his many entertaining and well-delivered spoken interludes, Lovett explained how the life of a touring bus driver works; they usually sleep during the day and through performances of the bands they’re motoring around due to their need to drive overnight to the next tour destination. Autry benefitted from the two-night stand in Clearwater and not having to drive on this night, therefore, was available to show off his musical chops for this performance. Sitting behind a small, mobile, electric piano that was wheeled out to accommodate him, the musically adept bus driver added plenty of flair and color to a handful of songs throughout the evening, most notably with the outright honkytonk feel he brought to the upbeat “Cute as a Bug.” 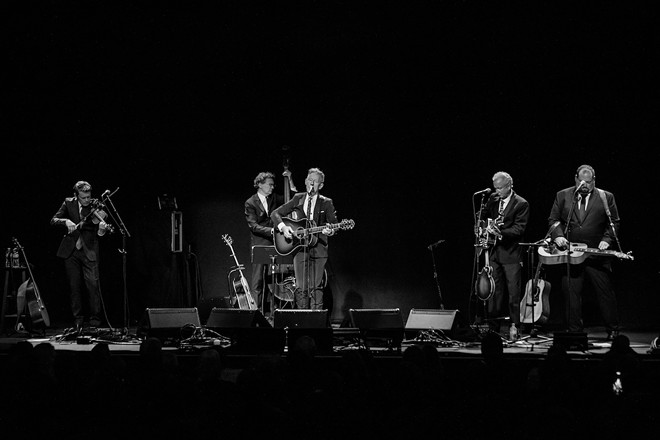 Photo by Caesar Carbajal
Lyle Lovett plays Bilheimer Capitol Theatre in Clearwater, Florida on March 12, 2022.
Always adding wry humor and his deadpan delivery to his spoken passages, Lovett noticed and complimented the sparkly attire a female patron seated near the front of the theater donned. Asking her to stand to show off her glittery jacket, Lovett, whose timing is impeccable, followed up by asking her if he could borrow it sometime. “It looks better on you,” he glibly added. While on the topic of clothing, Lovett made light of the way the world has changed while living through pandemic-plagued times. Poking fun at the reality that most who’ve been relegated to conducting meetings and conversations via online video communication services often only don respectable-looking attire from the waist up for said conversations, he launched into a raucous and hilarious version of his song “Pants is Overrated.”

Humble and grateful, Lovett graciously acknowledged the warm, receptive audience that filled up nearly every seat in the theater. “We appreciate your being willing to sit next to one another” he joked before making a more serious reference to those who have lost loved ones in recent years later in the evening. Lovett’s conversational ramblings ranged from having an open dialogue with mandolinist and guitarist Jeff White about his time spent playing with legendary Irish musical outfit The Chieftains to recalling anecdotes about touring with respected guitarist Leo Kottke—all of it added extra layers of entertainment to the already marvelous night of music.

Dusting off what he admitted was a request asked of him before the show, Lovett gave a precautionary warning that he and the band hadn’t rehearsed the Townes Van Zandt-written “If I Needed You” yet proceeded to knock out a perfect version of it anyhow.

Capping off his mammoth, 24-song set list with a rousing, show-closing version of “White Freightliner Blues” from his 2021 Release Me album, Lyle Lovett proved, once again, to local audiences that his shows always offer plenty of laughs, reflective moments, and absolutely amazing musicianship and talent.