Michael Bolton leans on covers and crowd conversations during short set at the Cap. 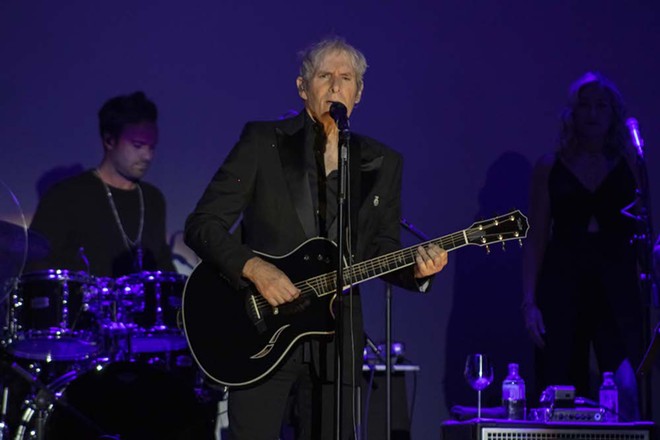 Josh Bradley
Michael Bolton
Believe it or not, Michael Bolton actually packed Clearwater’s Bilheimer Capitol Theatre to its gills on Tuesday night. With about half of the theater masked up, the enthusiasm and buildup to his arrival onstage was that of the 1990s, when he was at the height of his heartthrobbery.

Evidently, in the eyes of his fans, the 68-year-old soft rocker is still as sexy of a beast as he was 30 years ago. When he was taking a stab at some sort of banter—be it a song introduction, or snarky jest, all you could hear was women of all ages confessing their love for him in an almost clamorous manner. “How am I supposed to live without you?!” One fan shrieked, to which Bolton replied, “Is that a rhetorical question?” He’d warble the smash hit about six minutes later.

Bolton’s semi-annual Clearwater set didn’t even crack the 90-minute mark, he only played about 10 minutes worth of guitar early on, and most of his set consisted of Boltonified covers. On the other hand, his voice hasn’t shown any signs of deterioration after nearly two years off the road. When push comes to shove, that’s a remarkable accomplishment, considering the complexity of the notes he's hit throughout his life.

Hitting the stage about 10 minutes late, Bolton kicked off his set from stage right with Ben E. King’s “Stand By Me,” followed by the early, pre-disco Bee Gees cut, “To Love Somebody.” In between the two, he emphasized how grateful he was to be back on the road, despite the burden of “whatever this is,” obviously meaning COVID-19 and the omicron variant. Some didn’t care about his gratitude—for they had other random things to wail about. But Michael being Michael, he stood there and tried with all his power to listen. “We usually encourage dialogue, but we can’t be responsible for how long it is, or where it goes,” he amusingly explained before the room finally fell silent.

He perched on a stool with his black Taylor T5 Standard guitar during Otis Redding’s “(Sittin' On) the Dock of the Bay,” which was introduced as a song that really makes him think of his home state of Connecticut. “If you want some warmer weather, go up north,” Bolton joked, after a cold few days here in Tampa Bay. He would then ditch the guitar for most of the rest of the night, and keep up the covers. He’d duet with backup singer Chrissi Poland on Bob Dylan’s “Make You Feel My Love,” and the Cindy Walker and Eddy Arnold penned “You Don’t Know Me” was introduced as a song that outlived its composers.

Oh, and during “That’s Life,” Bolton’s backing singers actually exited the stage, which was unusual, considering the backup vocalists on Frank Sinatra’s version of the song. It’s not crazy to expect backing vocalists harmonizing on the “that’s liiiiife” part, right? 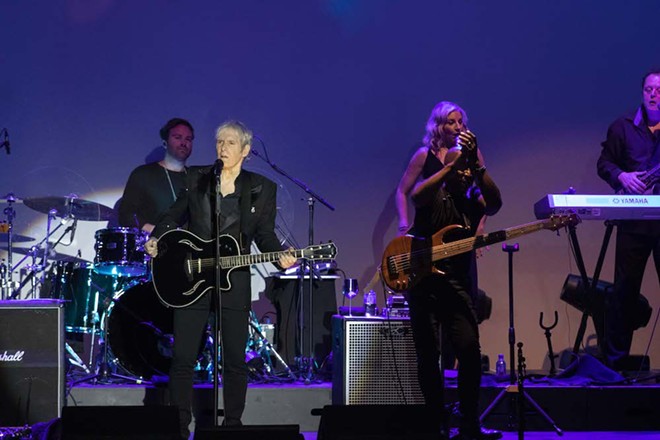 Josh Bradley
Now, it’s not necessary to poke fun at Bolton for not playing his guitar as often as other frontmen would. I get it: He’s a vocal-style performer—not an instrumentalist. For that reason, he had every reason to heavily lean on his tight, seven-piece band, featuring two backup singers and a grand piano. At one point, he ambled offstage to give them the spotlight, and as a result, saxophonist and keyboardist Jason Peterson DeLaire lead everyone in a Bolton-free rendition of the former’s current Billboard Smooth Jazz chart addition, “Check Please.”

In the 16-song setlist, Bolton owns a writing credit on only four of his selections. “Said I Loved You…But I Lied” was an early part of the show, and his collaboration with Bob Dylan, “Steel Bars” came closer to the end, and felt lesser-known than everything else. He rescued the set in the nick of time, though, when he closed with Bill Withers’ “Lean On Me,” dedicating it to all of the hardships that everybody in the world has been, and are going, through.

But to Bolton’s fanbase, “rescuing a setlist” is eternally preposterous. If his mouth is open, you will swoon, and you won’t ask any questions. Even if he charges $80 for less than an hour-and-a half of twinkly covers.