He also called DeSantis ‘a piece of work’ and complimented the guv’s boots. 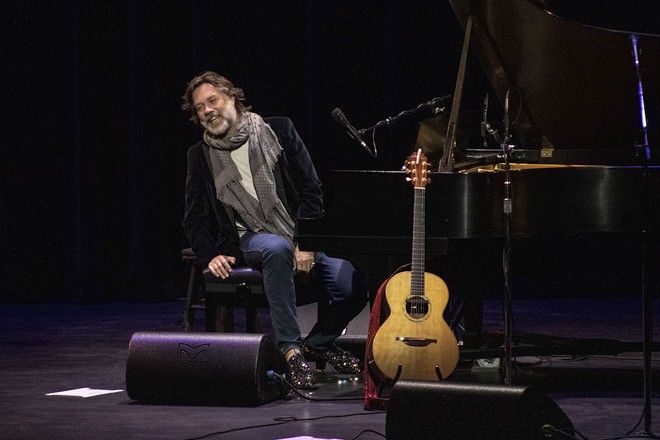 Photo by Josh Bradley
The ever so stylish Rufus Wainwright in Tampa, Florida on Oct. 7, 2022 looking dashing in his velvet blazer, loosely hung scarf and rhinestone encrusted boots.
A true sign of living in a great town is having a multitude of entertainment options to choose from on any given night. Tampa locals had plenty of choices last Friday night ranging from an Oktoberfest celebration, the kickoff of the annual Tampa Bay International Gay & Lesbian Film Festival, a double-bill of veteran alt bands Smashing Pumpkins and Jane’s Addiction, and a rare visit from extraordinary Canadian American singer-songwriter, Rufus Wainwright.

With so many choices, it’s understandable, yet unfathomable, why Wainwright’s performance at the Straz Center in the heart of the downtown area was so meagerly attended. Performing solo, and without the aid of a backing band, Wainwright delivered a breathtaking musical exhibition that had its fair share of hilarious moments and memorable anecdotes, to a small but enthusiastic gathering of fans.

The ever so stylish artist looked dashing in his velvet blazer, loosely hung scarf and rhinestone encrusted boots as he scampered onto the stage. Quickly taking his place at the bench of the massive grand piano at the center of the stage, Wainwright instantly launched into a flawless rendition of “Beauty Mark,” one of the many stellar tracks from his fantastic self-titled debut album from 1998. In fine form, his unmistakable tenor vocal style soared through the room and was exquisitely complemented by his impressive piano work from his very first note, and only improved as the night progressed. A particularly moving version of 2003’s dramatic ballad “Pretty Things” followed, and, by the second number of the evening, Wainwright had the entranced crown in the palm of his hand.

Those who’ve seen the accomplished musician (and son of gifted folk performers Loudon Wainwright III and the late Kate McGarrigle) in the past know that his quirky and amusing between-song banter is nearly as entertaining as his musical delivery. True to form, Wainwright added plenty of color and flavor to his repertoire when introducing songs or telling stories throughout the evening.

When describing the local scenery, the singer mentioned he’d walked the duration of the area’s Riverwalk five times and expressed his inquisitiveness about that “Moroccan building,” as he described it, in the area. “What is it?” he pondered before being bombarded with a roar of garbled responses. “It’s a hotel AND a university?” he chuckled after deciphering the replies he got from the audience, pertaining to the University of Tampa campus. “Well, it’s Florida!” he added to unanimous laughter and cheers.

Switching between his piano and a small acoustic guitar, Wainwright was in full command all night and revisited some of his more memorable compositions from his lengthy career. Sometimes self-deprecating, Wainwright admitted to not being too adept at tuning his guitar as he tackled the task and admitted that doing so is a “dark space” for him; with that, he launched into a loving, comical recollection of his dad’s proficiency in that department, as exemplified by his ability to change a guitar string, mid-song while performing, as heard on one of his many live albums. After tuning his instrument to his liking, Wainwright strummed it and exclaimed “beautiful!” and cheekily added “you don’t have to applaud!” as the audience did just that.

His stirring performance of the gorgeous “The Art Teacher,” a heartbreaking tale of unrequited love, was arguably the tour de force of the night. Wainwright seemed to lose himself in the performance of the ballad, his head swaying from side to side and his eyes firmly shut, as he belted the lines of the woeful tune in commanding, emotive fashion while at the piano.

Always one to reel himself in from getting too dark or too heavy, Wainwright followed the number by recounting a hilarious interaction he had with the recently-deceased Queen of England and the Royal Family after performing at Westminster Abbey years ago and joked that he’d soon be canvassing for votes “..with a bulletproof vest” in the state of Georgia as midterm elections draw nearer. While on the topic of politics, the singer referred to Florida governor Ron DeSantis as a “piece of work” before remarking on his recent fashion choices: “…and those boots!” he sniped, referring to the tall, white shoe wear the politician sported recently which have become fodder for endless memes circulating on social media platforms.

A rare treat came when Wainwright performed an aria from his 2015 opera Prima Donna. In his intro, he offered a disclaimer: “If you hate opera, this is a good opportunity to go buy some merch” he announced to a sea of laughter.

Ending the main set with a pair of numbers from his outstanding 2001 sophomore album Poses, Wainwright closed with a plaintive, solemn reading of “Cigarettes and Chocolate Milk” which drew hearty applause and a well-deserved standing ovation.

For his encore, Wainwright made a pair of stunning choices for his two-song finale. His brilliant “Going to a Town,” from his 2007 Release the Stars album sounded particularly timely and topical, especially when he belted its refrain “I’m so tired of you, America.” Ending the evening with his rendition of the Leonard Cohen classic “Hallelujah,” Rufus Wainwright wrapped up his delightful, 90-minute display of humor, musical artisanship, and charisma eloquently and reverently.

Having so many tempting choices for a Friday night out on the town is always a good problem to have. Those who opted to spend this night basking in the brightness and aura of Wainwright’s endless, engaging musical talents and got to witness this magnificent, one-man show clearly made the best choice of all.