An interview with the legend. 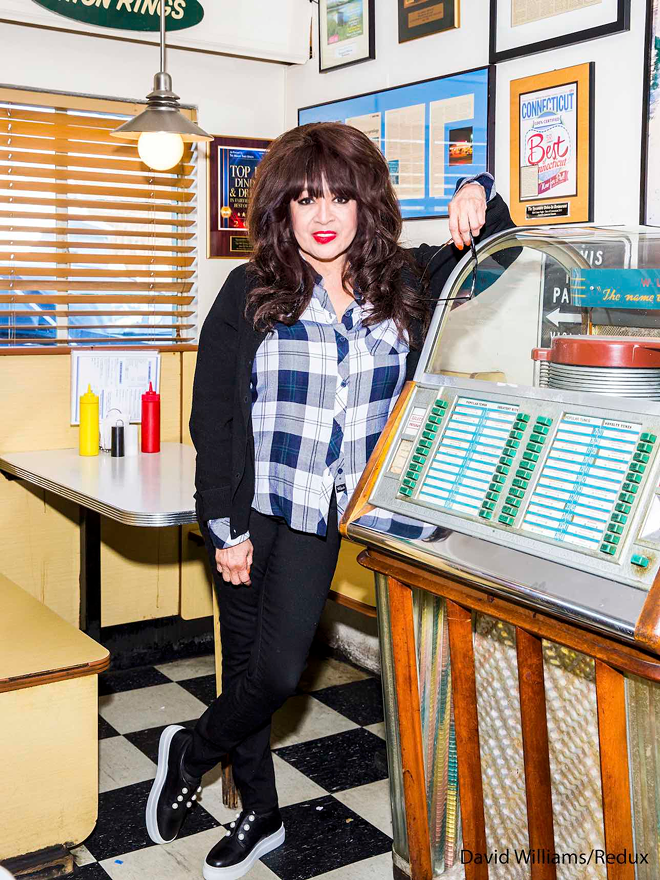 As owner of one of the most identifiable singing voices of all time, Ronnie Spector has gone from leading the best and the baddest of the ‘60s girl groups, The Ronettes, to working with artists like Springsteen. The “original bad girl” plays a rare Clearwater show this weekend, and talked about her past as a battered woman, singing in grandma’s lobby and more with us before she hits the stage.

Frankie Lymon was a big influence on you. What did it feel like the first time a vocalist came to you and told you that you’d been a huge influence on them?

It's happened a lot over the years, it's always a compliment, but really, I never pay any attention to it. Brian Wilson, Springsteen, Patti Smith and so on, they all couldn't have been nicer. But honestly I never really got it. To me Frankie Lymon was it, the greatest singer of all time. And I was inspired by Frankie, so I was just a female Frankie, no big deal. One time, I sort of got it was around 1987. I ended up backstage at Jones Beach Theatre in New York with the Beach Boys. And we were harmonizing to “I Can Hear Music,” the song I recorded that they covered. Carl Wilson is playing the acoustic guitar, and let me tell you, those guys were singing like angels, they could harmonize. And Mike Love turned to me and said, "I remember seeing you at the Cow Palace in San Francisco in 1964, and you were wearing those blue dresses and you did this. Then Carl said something too, and I was stunned. But I got it, at that moment it made sense, ‘cause I recalled that show vividly, and what happened that night.

You have one of the most distinctive and recognizable singing voices of all time. When did it become apparent to you that you had your own personal and unique vocal sound?

I was about seven or eight years old, I'd sing while my cousins backed me up in the lobby at my grandma's apartment building. It was one of those pre-war buildings that had a tiled lobby, and it made for this incredible echo. I didn't think it was special, but I could hear myself, and I thought, "Wow, I can do this."

Each passing year we got more removed from where we were in the beginning of the ‘60s, or for that matter the end of the '60s. Back then there was hope, you really thought you could make a difference in the world. I don't think people believe that anymore. They know the politicians aren't out for the people, they're out for themselves. We have lost all of our innocence, and that's a shame. I think the girl groups remind people of a simpler time, when people spoke to each other, and weren't looking at their phone for most of the day. Honesty and innocence were a big part of the girl groups.

You’ve worked with so many fantastic musicians and artists throughout your career. What’s your reaction when you hear people like Brian Wilson, Bruce Springsteen and the late Joey Ramone talk about what big fans of yours they are?

It did help me. As a battered woman, your self-esteem is very low. When your spouse tells you over and over that you're nothing without him, and you'll never be anything, that you are a loser, and so on, your confidence is shaken. Although I didn’t really pay that much attention to what other people said about me, it really helped my confidence, even if I didn’t know it at the time. Or in Bruce's case, he gave me the opportunity to go out and do what I love to do, perform live with him and the E Street Band. That really was the beginning of a long, hard climb back for me, the start of reclaiming my identity. All of the love from other musicians and artists have helped me reach this point in my life, where I am still here doing what I love to do, singing rock and roll.

You covered songs by writers and musicians like Johnny Thunders, Billy Joel and Marshall Crenshaw — you made them all your own thanks to your fantastic renditions. Were those songs you particularly liked and were drawn to initially? How do you usually decide which songs or material to record?

It's different for each project. Sometimes it's a collaboration with the producer and myself, and occasionally my manager is involved too. Or it's a song that I loved that I wanted to record. The Marshall Crenshaw songs were recorded with a good friend of mine, and we spent a lot of time listening to what would work. And there was one song that Marshall wrote that was a "Ronnie Spector" song, so we ended up recording that one. With Johnny Thunders’ "You Can't Put Your Arms Around a Memory," I was sitting around listening to music with Daniel Rey and Joey Ramone, my producers for that record, before Daniel played the song, and I said, "Yeah let’s record that, that's for me." My early hits were all written for my voice by some of the best songwriters around — Ellie Greenwich, Carole King, Barry Mann, Cynthia Weil — and that can really spoil you.

Talk a little bit about the current tour your on that will be stopping at Clearwater’s Capitol Theatre. What can longtime fans expect from this show?

I'm in Dublin now, we just finished that show, I hate to leave here since it's such a great city, but tomorrow we get on our tour bus and head up to Scotland, then Wales and we'll finish up in London at the Roundhouse, a very famous music venue where Amy Winehouse made her last public appearance. That will be a very emotional night for me. Amy's mom, Janis will be there too.

What can I tell you about my show? Well the fans get what they want, all the hits and more, like a song Brian Wilson wrote for me, which he ended up recording with the Beach Boys, or a cult classic — maybe a little doo-wop? Our show is multimedia, which really gives fans the feel of what it was like to be at a Ronettes concert in 1964. It's pure rock and roll, and I'm proud to say that that no one else has a show like ours. Sex, sweat and rock and roll.What else do you need?

The term “living legend” gets thrown around a lot, but I’m sure many would agree that it’s certainly appropriate when describing you. You’ve achieved so much, musically, and you’re forever embedded in the fabric of rock and roll and pop music. Does that kind of accolade make you proud or bashful?

It makes me feel old. I don't want to know about what I did 10 years ago, or 50 years ago, I want to know what I am doing next week. That keeps me going. So when people say that about me or to me, I'm like, “I still go to the grocery store and shop for food, just like you do.” I also say, “I'm not better, just different.”

Looking forward, what’s next on your agenda after this tour wraps up?

I am so excited about a project I've been working on for a while, and it's all coming together now. I'm going to keep performing live as long as the people show up to see me and I can have fun doing it. And I really hope to do some new things too. You know I always wanted to be a character actress, maybe this will be the year that I do that. You never know.