It's fitting to see her close the door on Tampa Bay at Ruby's Elixir. 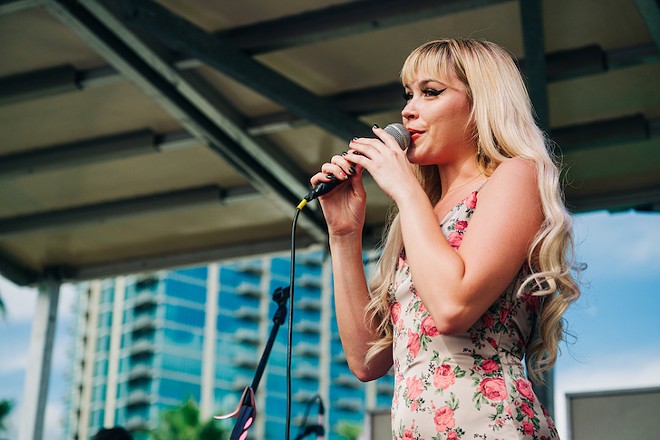 Photo by Jason Ryan c/o Gasparilla Music Festival
Ella Jet
When she was 16, bouncers had to sneak Ella Jet into Ruby’s Elixir so she could play.

Over the next eight years, her residency at the downtown St .Petersburg mainstay located at 15 3rd St. N grew to feel like home. It evolved from a solo gig, to one with her band Future Soul ,and again to the solo show she’s closing the book on this Thursday, Aug. 18 as she prepares for a move to Nashville.
“ I grew up there, learned how to play to an audience and work the crowd. As a pretty introverted young girl, that was an integral part of my journey playing live music. Even with all the drunken craziness that sometimes surrounded me,” Jet, 24, told Creative Loafing Tampa Bay. “I always gave them a piece of my heart. It’s been a fun ride and I’ll miss it.”

In Nashville, Jet—whose songwriting to date has been influenced by every aspect of the Bay area—hopes to to grow as as songwriter and musician by keeping things in her life fresh and new. She's already working with new producers in the Music City and cultivating a fresh sound she hopes to share with fans there and in Tampa Bay.

Still, Jet said, St. Petersburg is always going to be home.
"I have so many friends here old and new who have supported my music ever since I started playing as a young kid," she said. "Our music scene has always been a friendly one, full of so much talent, support and genuine love for music. Our local artists here have inspired me."

"I’ve played almost every bar and stage you can imagine in this area. From big shows at Jannus Live to local dive bars and every show in-between," she said. "It just feels like it’s time."