He's brought life to the plain, white, thick plastic sheets the shop uses to categorize and separate its stock. 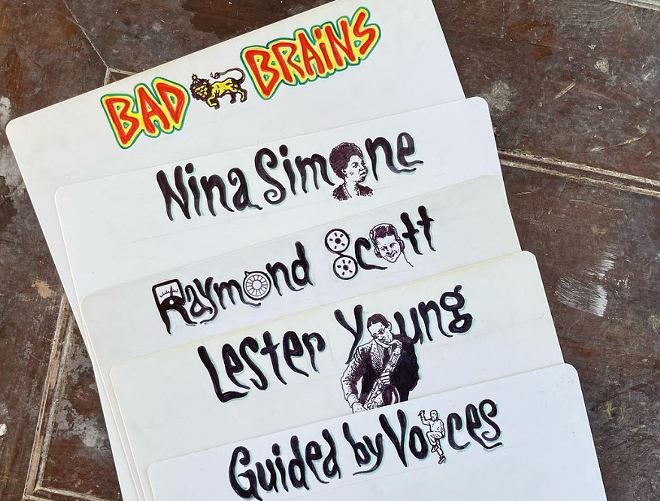 Madden, who is also a devout music lover, told Creative Loafing Tampa Bay how the partnership came about and how he approaches each and every mini-art project he cranks out for usage around the record store.

Read a short Q&A below and see the full conversation via cltampa.com/music.

So, are you known as the resident artist for Daddy Kool these days?

I'm just a freelancer. I'm on the team and I do a lot of freelance stuff for them. So that's not my full-time gig, but I've been doing a lot of work for them lately. I've been really busy with their assignments.

How long have you been creating the shop’s divider cards?

I think it's only been like a couple of years…maybe three years. I think it probably was before the pandemic when Manny asked me. I just think he just wanted a more uniform style and for me to kind of try to come up with some kind of hand-drawn typeface. They progressively got more elaborate.

Are you originally from the area?

I'm from Fort Myers. I worked in New York for about ten years and then I came to St. Pete about twenty years ago.

How long does an average card take you to create?

Not that long really. Well, the Grateful Dead one took a while. It took like maybe an hour. But usually, they take probably half an hour to an hour, maybe.

How did Manny approach you regarding getting those things done for him?

Well, I'm a regular customer there, and I had done some ads and stuff for them. He just mentioned it one day. He wanted to get a more consistent look with the cards. I’ve still only scratched the surface. I think you could easily go through the store and maybe not even notice some of the more elaborate ones. But yeah, there's just so many things to think about, there's just so many different artists and musicians and stuff.

Oh, I’ve definitely noticed them. Believe me, they are of particular interest to me because I used to manage a record store here in Tampa, and our bin cards were a big part of the shop’s personality.

There's all sorts of stuff you can do with them. Until I started creating them, I’d never really thought about it. But once you get into it, you can get really elaborate with a single bin card.

You obviously have a particular interest in music and that's partially what drew you to this project, I’d imagine.

Oh absolutely. I love record stores. Record stores are some of my favorite places. And I used to work as part of the art department at the St. Pete Times newspaper.

Your artwork on your Instagram page and shop is pretty impressive too. Is that your main outlet for selling your work or do you have a separate website?

No, I don't. And I'm probably my best customer on Threadless. I'm the only one that buys the shirts. I've been in a few art shows and my pieces have been well-received. Now I have more time for painting and stuff.

So you’re into painting? What are the mediums you specifically work in?

Acrylic. I would like to mess with oils, but I can't really afford oils, but everything I've done has been acrylic. I’m starting to get into a little sculpture and trying to incorporate some of that too.

What do you specifically use for bin cards you create?

Sharpie pens. But I've noticed some of the older ones are starting to fade and I'm thinking maybe I should switch to a paint pens, so maybe for the next batch, I will.

What's the inspiration? Do you try to think of something that will conjure a song title, or a mood, or a feeling for a particular band, when you're creating these cards?

It kind of depends on how familiar I am with the artist. For a lot of the ones I've done, I’ve just used the artist’s name. If I don't know anything about the band, I'll look into it a little bit more. But, I’ve done more elaborate ones for the artists I really like a lot. Like [John] Coltrane, Sonny Rollins, Meat Puppets and Iggy Pop. So, if it’s someone I like a lot, the imagery is pretty easy and it's just a question of narrowing it down. Also, you have to think someone's got to be able to read this and understand what it’s supposed to be saying. But the inspiration comes a little easier if it's an artist that you're already familiar with and that you really dig. But, if someone is walking down an aisle and they see something that catches their eye but they're sure who that artist is, maybe they’d want to check them out.

How long have you been an artist and what originally inspired you to create art?

I always loved cartoons. I loved “Peanuts” when I was a kid. My mom had a book by Bill Mauldin, the great World War II cartoonist and I wanted that book. And then I really liked political cartoonists. When I was in high school. And then I started getting into the underground stuff like from R. Crumb and Art Spiegelman.

Were you the guy who drew band logos on his folders at school?

No, I never did that much of that. That's an interesting point, too, because a lot of bands must have their own font. Like the Grateful Dead and Santana and The Beatles. Or Funkadelic.

So are you creating the bin cards in batches? Or are you tackling a certain area of the store at a time? Or is it all just done randomly?

Well, initially, it was Manny giving me a list of Record Store Day titles and artists. Those are the main lists that I would go by. And then, when I started creating cards for artists that I really liked, I would just get a bunch of cards from Manny and I would just do like a dozen or so of the people that I really liked and just bring them in. He can always use them.

I was born on a Sunday Morning.I soon received The Gift of loving music.Through music, I Found A Reason for living.It was when I discovered rock and roll that I Was Beginning To See The Light.Because through music, I'm Set Free.It's always helped me keep my Head Held High.When I started dancing to that fine, fine...
More
Scroll to read more Local Music articles
Join the Creative Loafing Tampa Bay Press Club