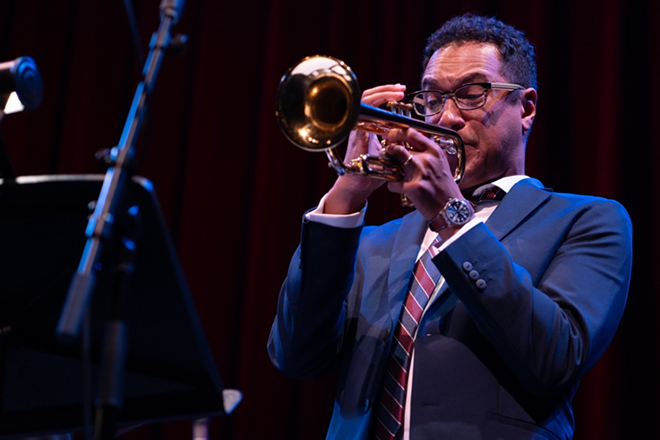 In the decade Paul Wilborn has spent as Palladium Theater’s Executive Director, he has smartly budgeted funds for an emergency cushion. That money management, an endowment and the ease of being part of St. Petersburg College—the school doesn’t charge them rent—helped keep Palladium afloat during the pandemic.

“I saved money for a rainy day,” Wilborn said in a recent chat with Creative Loafing Tampa Bay. “I thought we might have a fire or a hurricane would shut us down. Who knew it would be this.”

Palladium was used to having five to six shows a week. So after the last shows in March, there was time to reassess and come up with a new plan.

“Our rough estimate is we lost $100,000 in profit… in what should have been our best year ever,” Wilborn said.

Soon, Palladium Live, a streaming concert featuring local musicians performing at the venue, was born. The shows give the venue—which can normally host 830 people in its main room, Hough Hall, plus 185 in its Side Door listening room downstairs—a new way to reach an audience while paying local musicians; a definite win-win.

“Our musicians, we consider part of the family,” he added.

Though Palladium had some audio of a few Side Door shows recorded (some of which air on Fridays via WUSF 89.7-FM), Wilborn’s staff had to get into the audio-visual game.

“We didn’t even really own any equipment, I saw the real lack when we were unable to do shows,” Wilborn said. So they bought some new cameras and other upgraded equipment to help with producing the four camera-shoots. In-house production manager Christopher Spatafora has become the director of sorts.

“He’s really a lighting genius, he’s great with video,” Wilborn added. Even some of the participating performers are switching roles. “The guitarist Nate Najar has been really interested in video, so he came in and helped us early on.”

Najar isn’t the only multi-tasker. Wilborn’s musical talents created the theme song for the show. And no matter what, Wilborn wants to make sure the end result is worth people’s time and money. He wants to go above and beyond the internet streaming shows the world has been forced to watch all summer.

“What I didn’t like about… Facebook Live and Zoom music (shows)—it’s one camera, it’s a still shot. It gets pretty boring, and the sound’s not that good,” he said while explaining his love of Mandolin, the streaming service Palladium will use. “It’s not something I want to spend a lot of time watching. I think we’re all sort of over it at this point.”

The James Suggs Quintet will kick off the series with jazz, starting Thursday, Oct. 29. Wilborn has secured 10 slots for streaming shows, though the exact dates of the rest of the shows are up in the air.  Some of the other acts confirmed are Brazilian songwriter and singer Daniela Soledade (joined by Najar), blues with the Damon Fowler Band, comedian Ward Smith and friends, and the BEACON contemporary dance series.

“What people will see at home is sort of a sampling of what we do,” Wilborn said. Each show is previously recorded, and will include interviews with the bands, not too much chitchat, though.

“One of my pet peeves about these band music shows is that they talk too much and don’t play enough music,” Wilborn said. “We are just talking a very little bit and making it a lot of music.”

Every Palladium Live show will be available to stream for 48 hours after the air date. Wilborn is skipping a scheduled streaming subscription because of the unexpected nature of anything and everything right now. You know, because plans and pandemics aren’t very compatible.

Still, unlike a lot of venues, the full time Palladium employees have been lucky and have stayed employed throughout this nightmare. Though the luck might be attributed to Wilbourn’s money management skills.

“My full time staff have all stayed on, that’s eight people on my payroll,” he said. “We’ve been very fortunate.”

His employees aren’t the only ones benefiting from Wilborn’s thrift. With Palladium Live, and the occasional in-person show, Wilborn gets some money out to local musicians.

“We are paying our regular rates for all of these TV tapings,” Wilborn said. “And all of the shows we are doing now until December are local shows. We are paying them the full thing we would’ve paid before COVID. They’re not getting rich off of me, but they’re getting real pay.”

After months of no gigs, that’s definitely an uplifting turn.

In addition to the recorded shows, Palladium is slowly welcoming a live audience; its first in-person show since March was Oct. 3. The venue will continue to have occasional in-person shows if all goes well. Of course, pulling off live shows isn’t as easy as it was before COVID-19.

“We often would have one dark day a week, we were doing fine,” Wilborn said. “Now trying to pull off two shows in a week... the parameters, the rules, trying to make it safe, all more things to worry about than there was before.”

But the gang is doing even more work. Wilborn and the Palladium are also helping get money to local artists with “Palladium Creative Class of 2021,” a project created with the help of a private donor. As part of the program, at least seven artists will get between $2,500-$5,000 dollars to create shows for the Palladium. The name is a little deceiving because the project is getting started sooner than that.

“I’m calling it 2021, just cause who wants to put 2020 on anything. We’re going to start issuing checks and getting people going probably the first of November,” he said.

Whether in-person shows, Palladium Live or the Creative Class, Wilborn is only hiring local acts that have played at the Palladium prior. For now, at least.

Say that again louder for the people in the back.

Freelance contributor Stephanie Powers started her media career as an Editorial Assistant long ago when the Tampa Bay Times was still called the St. Petersburg Times. After stints in Chicago and Los Angeles, where she studied improvisation at Second City Hollywood, she came back to Tampa and stayed put.She soon...
More
Scroll to read more Local Music articles
Join the Creative Loafing Tampa Bay Press Club