Plus Worldwide Zoo and Moses Mayfield

SOULAR SYSTEM This horn-intensive Tallahassee funk ensemble (with a French Quarter flair) alternates from jubilant and silly to dark and mysterious, thanks to the multifaceted personality of wacky frontman Rev. Desmond D'Angelo. (Skipper's Smokehouse, Tampa)

TWELVE GAUGE VALENTINE w/THE HANDSHAKE MURDERS/MEMPHIS MAY FIRE Appears this early show could be the last chance to catch Tampa hardcore/screamo outfit Twelve Gauge Valentine, which after a five-year run are calling it quits, according to their website. (The Orpheum, Ybor City)

SPANKIN' FRESH w/WATERDIGGER/PSEUDO HEROES Rasher Tierney's in Bradenton was cruising along with some of the best rock booking on the Suncoast before a few bumps in the road forced a hiatus. Now that the new year is upon us, promoter Ben Bakker is promising that things are full steam ahead. This gig, featuring B-town punk rock heroes Spankin' Fresh, is the first show at the reborn venue. Stay tuned; exciting plans are in the works. (Rasher Tierney's, Bradenton) —Cooper Levey-Baker

RCK w/MUTE ISSUE/6 YEAR BENDER Sarasota's Gallery Billiards has received plenty of notice thanks to its organ-annihilating Saturday night metal showcases. Now, Friday nights are getting their serving of in-your-face rock, with a mixture of grunge and punk. (Gallery Billiards, Sarasota) —CLB

THE DRAFT w/YOUNG LIVERS/THE TIMVERSION/NEW BRUISES It's been a bizarre and exciting series of events lately in the world of Gainesville (by way of Bradenton) punk band Hot Water Music. After playing together for more than a decade and releasing acclaimed albums on venerable labels such as Epitaph, HWM announced it was going on hiatus in '05 so singer/guitarist Chuck Ragan could pursue a solo acoustic side project, which became full-time and led to the group breaking up last year. The remaining three members of HWM — Chris Wollard (singer/guitarist), Jason Black (bass) and George Rebelo (drums) — resurfaced as The Draft and released the visceral yet melodic full-length In a Million Pieces on Epitaph. But Hot Water fans need not fear; there are already rumors of a new album, and the band has posted 2008 dates on its website, including a Jan. 19 gig at the House of Blues in Orlando. (Crowbar, Ybor City)

BLUE SKY MISSION CLUB Featuring male and female lead singers, this ensemble from Ithaca, N.Y., cites Little Feat as a primary influence and successfully combines elements of folk, rock, Zydeco, bluegrass, reggae and soul for what should make for a joyful noise under the oaks of the Skipperdome. (Skipper's Smokehouse, Tampa)

POCO Like The Eagles, but laid-back to the point of being horizontal, Poco started strong with their credible country-rock debut Pickin' Up the Pieces in 1969 but dissipated into suppliers of soft rock, scoring hits with schlock like "Crazy Love" a decade later. (Largo Cultural Center, Largo)

CHUBBY CHECKER & THE WILDCATS The hack who hijacked Hank Ballard's 1959 ditty "The Twist" (which Ronny Elliott claims came from Tampa) has milked his milquetoast hit version for nearly five decades, continuing to play it in concert alongside other rip-off numbers like "Let's Twist Again," "Twistin' U.S.A." and "Slow Twistin.'" (Cypress Gardens, Cypress)

THE REGGIE SEARS UNIT Is it just me, or do young blues prodigies just keep coming out of the woodwork? Sooner or later, the Sarasota Blues Festival is going to be headlined by a toddler with some hard-livin' daycare tales to tell. Reggie Sears isn't quite that young (the whippersnapper was born in Fort Lauderdale in '91), but he still qualifies as a kid in the blues game, with goes-down-easy pop-rock licks that lack that hard, ball-bustin' punch of most electric blues. (Aces Lounge, Bradenton) —CLB

WORLDWIDE ZOO Easily one of the area's top organ trios brings its progressive-yet-danceable blend of jazz, funk and jam-oriented rock to the Skipperdome. (Skipper's Smokehouse, Tampa)

MOSES MAYFIELD Based in Birmingham, Ala., this rock quintet's debut album, The Inside, came out on Columbia last March. It's a rootsy pop affair, focused on the radio-friendly vocals of singer/guitarist Matthew Mayfield. (The Orpheum, Ybor City)

CHRIS BOTTI The smooth-jazz trumpeter with the pretty face returns to Ruth Eckerd for another night of easy listening. (Ruth Eckerd Hall, Clearwater)

THE RISE OF SCIENCE w/SPINLIGHT LETTER/HELLO ALASKA/TEARS IN SAHARA/NIGHTLIFE Atlanta five-piece The Rise of Science offers grabby alternarock that finds an interesting middle ground between prog and emo. (The Orpheum, Ybor City) 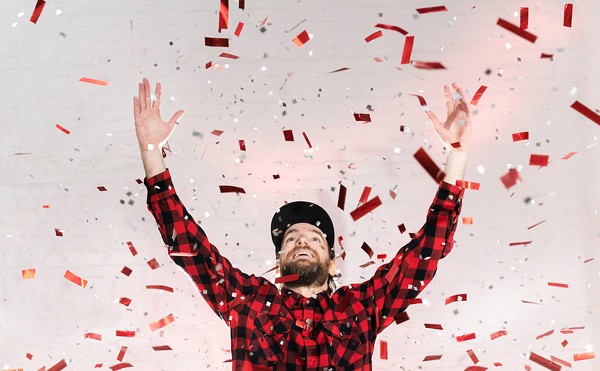