Skipper’s gives back, too. On Monday afternoon, Ybor City, one of the first Tampa neighborhoods to be evacuated as Irma approached, looked unscathed (save for the plethora of dead palm fronds everywhere).

Even the roosters sang their songs.

At New World Brewery — which opened gracefully before running out of food twice — the mood was borderline celebratory. And while there’s nothing like counting your blessings and privilege along with pints of craft beer, stories of the storm that was Irma poured out of local musicians and concertgoers like the floodwaters that have sadly ravaged our neighbors to the northeast.

DieAlps! Bass player Ariel Cortes told CL that a tree branch came through the window of his Tampa Heights home while he was playing Trivial Pursuit with a friend who’d evacuated to his abode. Rodney Smith — who plays guitar in Tampa punk band Radarmen — hilariously backyard weather reported Irma on his Instagram account (@solofoxes) this weekend, and almost escaped damage to his home until he went to make his own post-hurricane evacuation at the commode.

“A branch fell and put a hole in my roof,” Smith, told CL, when queried about the, er, mid-disposal incident. “The storm was freakin’ over already!” His tablemates, which included Tampa songwriters Shae Krispinsky and Jeff Brawer, could only laugh in response.

A mile away, two Tampa Theatre staff members — technical director Lloyd Pearson and director of operations Cathy Prance — evacuated to the inside of the movie house while a felled tree barely missed the iconic venue’s awning. Across the bridge in St. Pete, Green Bench Brewing, The Bends and Lucky You Tattoo escaped damage while Rob Sexton of Planet Retro records got help from a handful of do-gooders who rearranged the shop so his stock of vinyl would be protected from potential floodwaters.

At Skipper’s Smokehouse — where winds spared the Skipperdome and virtually every element of the famed Tampa venue — marketing manager Cricket Larson and owner Tom White are collecting survival items (think mosquito repellant, tarps, ropes, water, propane, duct tape, etc.) and driving them down to the Keys (get additional details on the effort via Facebook).

Feel-good, damn-we-dodged-a-bullet stories were everywhere, even at Crowbar in Ybor, which lost a full week of national shows due to that bitch Irma.

“We actually rode it out with family and some employees at the bar. I felt it was safer than our old, wooden [Ybor] homes,” general manager Tom DeGeorge told CL. “But touring bands have been afraid to come down. It’s a big hit financially, but a lot of people are in worse situations than I am. The loss is huge, but I’ll figure something out.”

We’ll all figure something out, actually, and hope we don’t have to do that again for a long, long time. 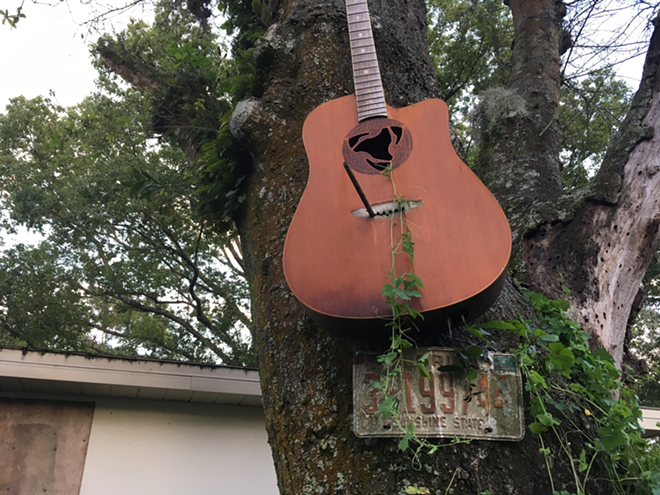 Rodney Smith
A guitar that Rodney Smith affixed to an oak in his backyard in Tampa, Florida many years ago. It survived the storm.