This is the Apocalypso. Farewell show with Help Police happens on Feb. 4 in Ybor City. 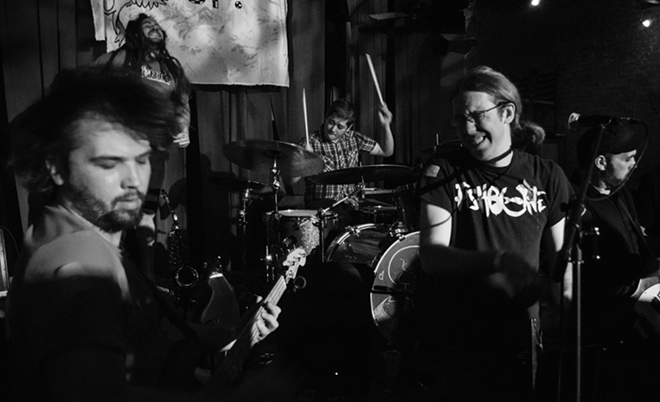 Melissa Bistrican
Johnny Cakes and the Four Horsemen of the Apocalypso, who play Crowbar in Ybor City, Florida on February 4, 2017.

“This isn't a fake ‘going out of business sale,’ we are really done.” That’s Michael Middlebrooks telling CL that his long-running gutter calypso band, Johnny Cakes and the Four Horsemen of the Apocalypso, is done for good after a final show Feb. 4 at Ybor City's Crowbar. “There will be no reunion,” Middlebrooks added. “This is the Apocalypso.”

DO THIS: JOHNNY CAKES AND THE FOUR HORSEMEN OF THE APOCALYPSO FAREWELL SHOW
CROWBAR 02.04.17

The band, which started as a garage joke project, arrived in the Bay area and played its first show at Uptown Bar in St. Pete (which is now home to Fubar) over a decade ago. Almost 40 Horsemen have come and gone since then, and the run has been memorable to say the least. A 2009 EP release show at Ybor City’s Market on 7th earned them a visit from the fire marshall, and another one at Crowbar was a concert/game show where audience members spun a wheel to win prizes. Johnny Cakes may also be the only band to both open and close WMNF’s Tropical Heatwave.

“The first set was at the Cuban Club,” Middlebrooks explained. “Afterwards we got kicked out of the green room for drinking all of the beer. Then seven or so hours later we closed out the night with another set at the New World.” There was also the time saxophone player Ricky Peterika snuck a chainsaw into a venue.

“He took it out during one of the songs and scared everyone out of the bar. We have always tried to make every show interesting and unique in some way.” If it’s been so fun, then why wouldn’t Johnny Cakes just go the way of most bands and check back in every now and then?

“It has reached the end of what we can really do with it,” Middlebrooks admitted, adding that it’s also tough to get 10 people to band practice. He plans on starting a new project with bandmate Mikey OD (it sounds a little like “hipster pop,” but that could change), and will be working on stop-motion cartoons, too. For now, he’s focused on sending Johnny Cakes to the grave with honor.

”We accomplished way more with the band than we ever thought possible and we're really happy with how everything turned out. Now we want to go out with a bang,” Middlebrooks said. “This is not the sort of band that I want to fade away and do the occasional show. We needed to have one big final blowout.”

Check out a trailer for the farewell show and and full Q&A below. Get more information on the show via local.cltampa.com.

Are these really the last shows? Because so many bands say it’s over, but it never is.

Yes, this is really it. This isn't a fake "going out of business sale," we are really done. There will be no reunion. This is the Apocalypso.

Why is it over? The band doesn’t really play that much anyway, it seems like you could pop in every now and then?

The band is over because it has reached the end of what we can really do with it. We have always tried to make every show interesting and unique in some way, but it is challenging to get 10-plus people together for a band practice. Mikey OD and I brought Johnny Cakes to Tampa a little over 10 years ago. We had been working on it a few years before that as a concept/joke/garage project. Over that time we accomplished way more with the band than we ever thought possible and we're really happy with how everything turned out. Now we want to go out with a bang. This is not the sort of band that I want to fade away and do the occasional show. We needed to have one big final blowout.

What are some of your fondest memories of the band?

That is a tough one, there are so many fond memories. The first time we played Tropical Heatwave we were actually booked for two sets on the festival. We hold the record for being the only band to both open and close Heatwave in the same year. The first set was at the Cuban Club and it was a lot of fun. Afterwards we got kicked out of the greenroom for drinking all of the beer (in our defense there were 10 of us). Then 7 or so hours later we closed out the night with another set at the New World. That was a wild day!

Every single year we that played the Florida Music Festival we would sneak the whole band into their VIP parties. One year, after opening for Less Than Jake, we snuck the whole band and a bunch of friends onto their VIP party bus. The two CD release parties that we had were both amazing. The first was at the Market on 7th in 2009. We had so many people there that the Fire Marshall showed up. The second one was a Crowbar and we were really able to run that one like a game show. We had a giant wheel that we had the audience spin to win prizes. Except that there were only about real two prizes on the wheel and everything else was embarrassing punishments that they had to do for our amusement.

One time Ricky snuck a chainsaw into a show without telling anyone. He took it out during one of the songs and scared everyone out of the bar.

Where did you play your first show?

Our very first show was at the Uptown Bar in St. Pete (the spot is now home to Fubar). It was a lot of fun. The band was pretty different back then. We had another guy who sang half of the songs, only one horn player, and I didn't even have a proper stand for my steel drum, I had to wear it on straps around my neck.

Who’s in the lineup these days, and who have you lost over the years?

The main lineup recently has been me, Mikey OD on guitar, Ryan Harvey on bass, Woody Bond on drums, Drew Smith on Trumpet and Ricky Peterika on sax. But, the lineup is forever changing. People leave and come back frequently in the band as their life circumstances change. In all there have been over 35 horsemen since the band's inception. A lot of them are returning for the final show, we should have around 15 (maybe more) people performing with us for that show. We'll have Tyler Jones and Josh Burke returning to play bass, JVV returning on trumpet, Dane Skelton on saxophone, Mike P on drums, Andy Pilcher on trombone, Ben Datin on trumpet, Timmy Gates on trumpet, and Dan Smith on saxophone. There are likely others who will be joining us as well.

You’re a big supporter of your local scene. Who should your fans be looking at moving forward?

We have a great local music scene in Tampa, there is a lot of talent here. In the past year the bands that I've gone to see and enjoyed the most were DieAlps!, Radarmen, and Drug. They moved, but I am also always impressed with Samurai Shotgun. If people want more ska music then go to Pink It Up 8, February 25th at Crowbar to see a lot of fun ska bands and help raise some money for a local breast cancer charity. Finally, I do have mention our opening act for the show, Help Police. There is a reason we put them on this show, they are worth checking out.

So what’s next for you?

I am in the beginning stages of starting a new music project with Mikey OD. It will be very different from Johnny Cakes. Right now the best way to describe the genre would be something like "hipster pop." I don't want to say too much because it's early on and things will likely change as the project develops, although I can promise it will be a lot of fun. We're also working on making some stop-motion cartoons.