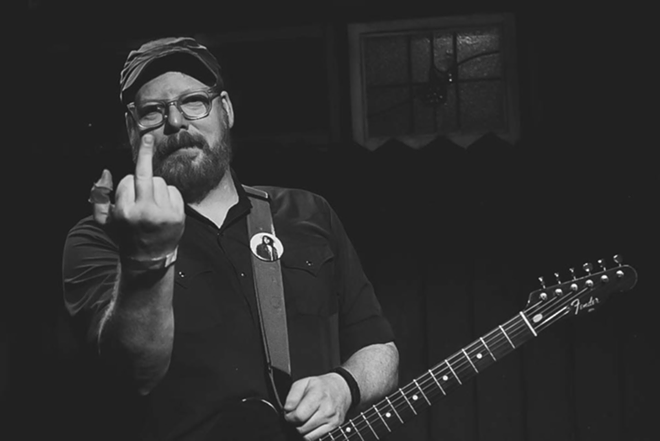 Jess Phillips
Will Quinlan, who plays Crowbar in Ybor City, Florida on December 9, 2017.

✔️ David Crosby Croz is as cosmic as he ever was on yet another new album (Sky Trails, released this year, is his third since 2014), and the 76-year-old rock Hall-of-Famer proved it in an interview with CL, which you can read here. Hope you have a ticket for this intimate gig at The Cap, too, as it sold out eons ago. (Capitol Theatre, Clearwater) SOLD OUT

✔️ Sting w/The Florida Orchestra Sting and a three-piece band are coming to play alongside the Florida Orchestra for its 50th anniversary, and about 2,000 people are pretty happy about scoring tickets to see the superstar play 90 minutes of hits at St. Pete’s Mahaffey Theater. The rest of us? Well, we’ll just have to find our old “Fields of Gold” to frolic in that night. Albert Whitted, anyone? (Mahaffey Theater, St. Petersburg) SOLD OUT

READ MORE
UPDATE: The public can buy tickets to see Sting with the Florida Orchestra today — but will there be any left?

Squirrel Nut Zippers Here’s a holiday show we can faithfully throw our word behind. It’s the first one ever for Squirrel Nut Zippers, which is bringing its let’s-not-take-nostalgia-too-seriously attitude to St. Pete (and just nine other cities in the South) where it’ll salute ’20s and ’30s hot jazz and swing while also poking fun at the purists who tried to make the big band revival movement of the ’90s into some kind of elite club. (State Theatre, St. Petersburg) INFO

✔️ Crowbar 11 Year Anniversary w/Lost Weekend Riviera Club/Will Quinlan & the Holy Slow Train/Pleasures/Vern Senior/Silent Disco feat. Wally Clark and Rogerthomas/more Last year, on Crowbar’s 10th anniversary, CL slathered its appreciation for the Ybor City concert venue on the front page, and in 2017 the club made the city proud by hosting about 300 concerts and special events. There are still about 17 shows left to do before the year is over, but co-owner and GM Tom DeGeorge is tapping Bay area supergroup Lost Weekend Riviera Club to headline this free anniversary show alongside local Americana god Will Quinlan & the Holy Slow Train, rising rapper Vern Sr. and trippy psych-rockers Pleasures. Another CL favorite, Wally Clark, plus Pleasures drummer Rogerthomas, will hold down a courtyard silent disco, too. (Crowbar, Ybor City) INFO

✔️ onBikes Winter Wonder Ride w/Salt-N-Pepa/DJ Jazzy Jeff Close to 1,000 bikes were assembled for this year’s Winter Wonder Ride (which connects at-risk kids with a bike because, let’s face it — true happiness is riding a bike). To reward volunteers and donors, onBikes is bringing back an old friend (DJ Jazzy Jeff, who played the Ride in 2015) and some new-to-Curtis Hixon ones, too. Salt-N-Pepa helped shoehorn all-female hip-hop groups into the national conversation back in the ’80s, and the legendary outfit is a perfect headliner for what’s starting to become one of the best, not-so-little annual old-school hip-hop shows in the Bay area. (Curtis Hixon Waterfront Park, Tampa) INFO

Rebekah Pulley and Ronny Elliott Two totems of the Tampa Bay folk-music scene come together once again when Rebekah Pulley and Ronny Elliott stage a performance that'll include solo sets as well as a joint performance. Throw in the fact that it happens in conjunction with St. Pete's second Saturday Art Walk (where Ben Cardoso’s holds a closing for his exhibition, Expression through Color and Texture), and what you have is a win-win-win. (St. Pete ArtWorks, St. Petersburg) INFO