CL Premiere: Tampa emo outfit Pohgoh pens a brand new song for Jobsite Theater — listen to "As You Like It" now

With lyrics by Shakespeare. 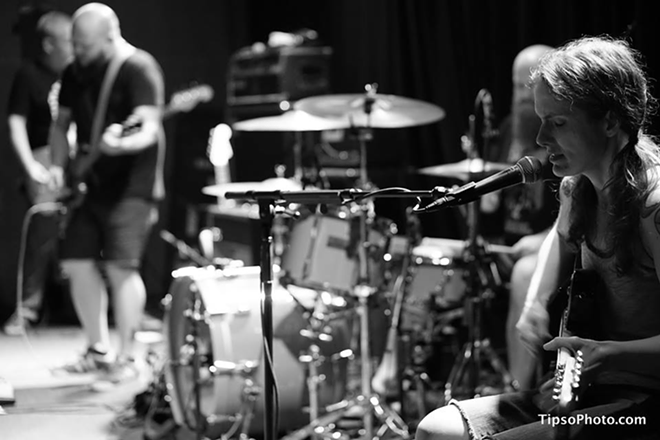 Michael Lothrop
Pohgoh at The Social in Orlando, Florida on August 12, 2016.

New Granada Records co-founder Keith Ulrey was a little hesitant when when Jobsite Theater co-founder David M. Jenkins approached him about composing a song for a scene in an upcoming production of Shakespeare's "As You Like It."

"I was thinking he wanted a score or something, and I was like 'eh...I dunno man, I might not be be your guy," Ulrey told CL.

As it turned out, Jenkins — who had already hand picked several songs from the Tampa indie label to soundtrack the show — wanted an actual pop or rock song to play during a wedding scene from the play, which also features lines from Jaques’ iconic “All the world’s a stage” speech and other famous texts.

So Ulrey, 45, got with his Pohgoh bandmates Matt Slate and his wife Susie Richardson Ulrey to compose guitar parts plus vocal harmonies and melodies en route to a new song that is part of a 16-track soundtrack featuring bands from New Granada's roster. The nearly six-minute track was recorded, mixed and mastered at Tampa's Atomic Audio with Frank Calcaterra over the course of two evenings. There was no lyric writing involved since the words provided by Jenkins were from Shakespeare himself (Act five, scene four from "As You Like It," to be exact).

"It was a fun challenge for the band," Pohgoh wrote on Bandcamp, "and definitely something different."

Listen to the beautiful marriage of Tampa Bay's independent theater and music scenes below. Download the song for free on Pohgoh's Bandcamp page, and check out the entire soundtrack here. "As You Like It Runs" from January 13 - February 5, and preview shows happen on January 11 & 12. More information is available here.