This after releasing music with Aertex and Too Free. 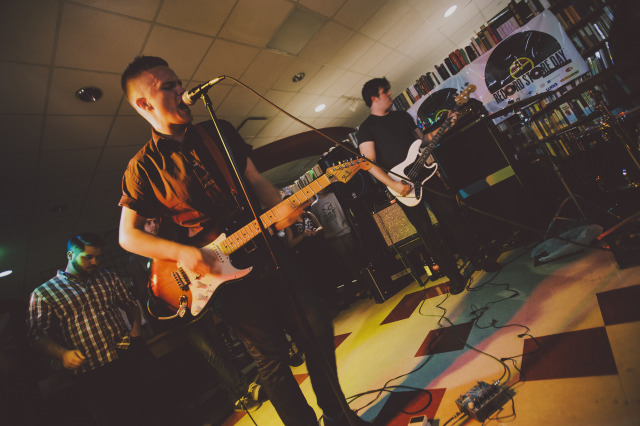 Carson Cox may not live in Tampa anymore, but he’s still got hours of music made, and more to eventually be made, from whatever city he lives in this week.

Other than some demos and previously unreleased material, it’s been a minute since we’ve heard any brand new material from his band Merchandise (which was signed to 4AD).

In the last year, Carson shifted his focus over to new musical ventures, under different names. He dropped the contemporary feels and synthed up while briefly working on a project or two as Aertex. After that, Too Free, a trio Cox is a part of, made national headlines for its album, Love in High Demand. Now, Cox has switched gears and found the confidence to release a lost baby of his which has been waiting to see the light of day for far too long.

Under yet another new pseudonym, Romeo Blu, Cox has finally released his Jordan’s Bed EP, which is, like his solo projects before, far less contemporary than his days with Merchandise.

“I have a hard time making ‘genre music’ other than punk and never really could validate releasing it as legitimate or something dumb,” Cox wrote on the EP’s Bandcamp site. Channeling Thomas Dolby and early Depeche Mode, Cox has been toying around with the title track, and a more instrumental 80s-style adventure, “Above U,” for about ten years. It never released under the Merchandise name, due to him knowing deep down that these didn’t quite fit in with what was coming out of the group.

Will there be more from Romeo Blu? What if Cox has a whole hard drive of more Dolby-esque jams that didn’t fit in with Merchandise? Perhaps when (if) the pandemic ends, Merchandise will be re-reborn, and do another incredibly intimate show at Tampa’s Mojo Books And Records, like in 2016 (or in 2013, pictured above).

“2020 is the great equalizer. It’s pushing me to share more which isn’t that easy for me,” Cox wrote in closing his song description. Here’s to hoping it gets easier; we could all use more Carson Cox right about now.

Josh Bradley is Creative Loafing Tampa's resident live music freak. He started freelancing with the paper in 2020 at the age of 18, and has since covered, announced, and previewed numerous live shows in Tampa Bay. Check the music section in print and online every week for the latest in local live music.
More
Scroll to read more Music News articles
Join the Creative Loafing Tampa Bay Press Club