Tampa jazz icon Kitty Daniels is back at Donatello, but the pandemic’s financial hit hurt ‘quite a bit’

The 85-year-old unexpectedly welcomed four family members into her home. c/o Louise A Krikorian
Album art for 'In Shore, Off Shore Again,' a new CD by Kitty Daniels (R) and Majid Shabazz.

On Monday, May 4, Kitty Daniels went back to work. She resumed her three-nights-a-week gig at Donatello restaurant in Tampa—just herself at the piano, singing and playing old standards, jazz tunes and some more recent-vintage pop songs. She performed from 6:30-10 p.m., with one break. We spoke by phone the next morning, and, although she was a little tired, there was an air of elation in her voice.

“Oh it was fine, just terrific,” she effused about the previous night’s performance. “Everybody had a good time. They were dressed to get out of the house. Most everybody stayed six feet away from me. I had to ask one lady to move further back. As a matter of fact, she gave me a tip. I do feel like one of the most vulnerable people, so I was very concerned about that.”

Ms. Daniels is right about her risk factor. She’s 85 years of age. Until her gigs shut down due to the coronavirus pandemic, she was working five shows a week—at Donatello and Benedetto’s—with Fridays and Saturdays off. On certain nights, she was joined by Majid Shabazz, her life and musical partner of more than 40 years.

Not long into isolation, “I got bored and wanted to play,” she said, so the singer/pianist started performing via Facebook Live on Mondays, Tuesdays and Thursdays to correspond with her Donatello nights. It was a simple setup—just a cell phone camera and room lighting—that her grandson arranged. A tip jar generated a few dollars. Still, Daniels said the shutdown had harmed her financial condition “quite a bit, quite a bit.”

Not long after the pandemic hit, her son-in-law lost his job in California. Without much warning, a family of four showed up at Daniels’ door—her daughter and son-in-law, and their son, 21, and daughter, 18, who has full-blown sickle cell anemia and spends about half her time in the hospital. (Daniels declined to provide their names.) Suddenly, Daniels and Shabazz had a houseful.

“You wouldn’t believe it; there’s so much junk in this house it ain’t funny,” Daniels said, a tinge of resentment in her voice. She and her daughter tend to clash, she said, which has created further stress in the cramped home that’s only eight blocks from where she grew up.

“My daughter is the youngest child of mine and expects that I owe her something, if she’s 50 or gets to be 95.” Daniels said, adding that she’s the sole earner in the house but, “people forget that I’m not making any money.”

A couple of times, Ms. Daniels found her bank account in the red and had to “make some phone calls in a hurry” to head off overdraft fees. The singer said she receives a monthly Social Security check that’s “a little bit of one, mostly ‘cause of the kind of work I do.”

Still, she’s taking it as it comes. “I’m leaving it in God’s hands,” she said. “You know somebody else’s hands I can put it in?”

Kitty Daniels doesn’t know how many songs she knows. That’s mostly because there are too many to count up. A large part of her repertoire comes from the Great American Songbook—stuff like “I’m in the Mood For Love,” “Have You Met Miss Jones?” and “All of Me”—but she can knock out some Billy Joel, Beatles, what have you. She’s committed most of the songs to memory.

“Sometimes I find I know a song that I didn’t even know that I knew,” Daniels explained. “Someone will ask for it and I’ll just play it all the way through. I’ve always been able to listen and learn a song at the same time. I feel like I know 90% of the songs people request.”

That, friends, describes a human jukebox with a superhuman ear—as long as you don’t ask her for Beyonce or Bruno Mars.

Bob Seymour, the former music director and DJ for WUSF’s “All Night Jazz” program, and one of leading figures on the Tampa Bay jazz scene, has known Daniels and Shabazz a long time. He’s a big fan and supporter.

“I think Kitty is cut from whole cloth; she mostly has figured [the music] out for herself,” he said in early May. “She has this rhapsodic [piano] style of accompanying herself. And I’ve never seen anybody take more requests.” 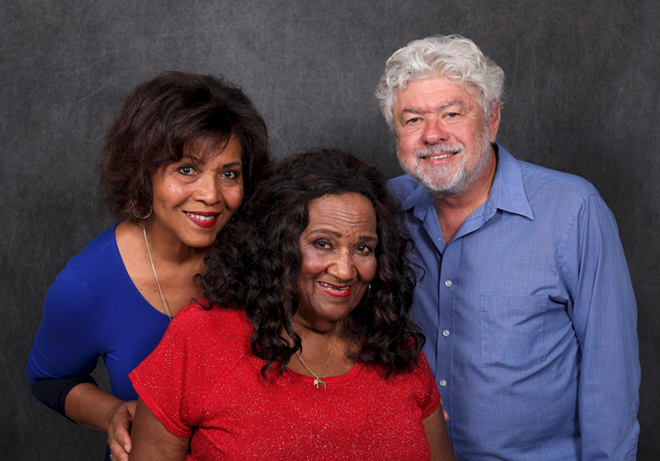 Known as Kitty from birth, Dorothy Daniels grew up in a rooming house in Ybor City that her parents ran. As a toddler, she practiced on the piano owned by one of the tenants, according to a 15-minute documentary, "Kitty Daniels with Majid Shabazz: Jazz Legends," whose release was put on hold due to the pandemic. When the roomer moved out, Kitty’s mother scraped up the money to buy it. The child prodigy started taking lessons at age six and learned to read music in high school.

Daniels’ landed her first musical job in her early 20s as a pianist for a singer named Bebop Jackson. His quintet played in a remote bar out near Plant City, Daniels recalled. She joined Doc’s Skyliners, a hugely popular regional band that played the Palladium Ballroom in Tampa on Saturday nights, as well as in nightclubs and fraternity houses in Florida and Georgia.

“They fired me,” Daniels said. “I used to love this dog named Rinaker, and if he was runnin’ at [Derby Lane] I was gonna be there. I knew the band had a guy who could play the first two songs, but they fired me anyway for bein’ late.

“So I decided to play on my own. I was the only girl in the band. When we’d take a break, I wouldn’t go to the break room ‘cause all the men talked about was women. I didn’t want no part of that. I used to stay out front and play the piano during breaks. There was a club owner who always told me if I wanted to play on my own to let him know. I called that man right then.”

“I got a call from the [Skyliners bandleader],” Daniels said. “He said. ‘Doc said you can come back to work.’ I said, ‘I’m already workin’.’ I’ve been mostly playin’ solo or with Majid ever since.”

During her younger days, Daniels received several offers to join touring bands, including one from R&B star Jackie Wilson. She passed on all of them.

“I didn’t like to fly,” she said in the documentary. “I wanted to stay home with the children, and my boss didn’t want me to leave where I was playing.”

As a result, Daniel’s career has remained close to home. She started entertaining diners and bar patrons at Donatello’s in 1999, and it has been a fruitful partnership for both parties. Her reputation on the local scene came relatively late, but recently the accolades have been rolling in. Mayor Bob Buckhorn proclaimed August 27, 2018 Kitty Daniels Day in Tampa. In January, Daniels and Shabazz were given the first annual Palladium Jazz Award during a ceremony at the St. Pete venue.

Daniels has not resumed performing at Benedetto’s, but the Donatello’s job looks solid for the time being. When I asked her how long she planned to continue performing, her answer was succinct: “As long as I plan to keep breathin’?”

Daniels was interviewed May 5. This story is part of a series about how musicians are coping with life during the COVID-19 pandemic— from a creative, financial and emotional standpoint. The subjects are those who make their living as full-time musicians, not as a sideline. If you fit into this category and would like to share your story, email: [email protected]