'Maybe he really is a time traveler from the future.' 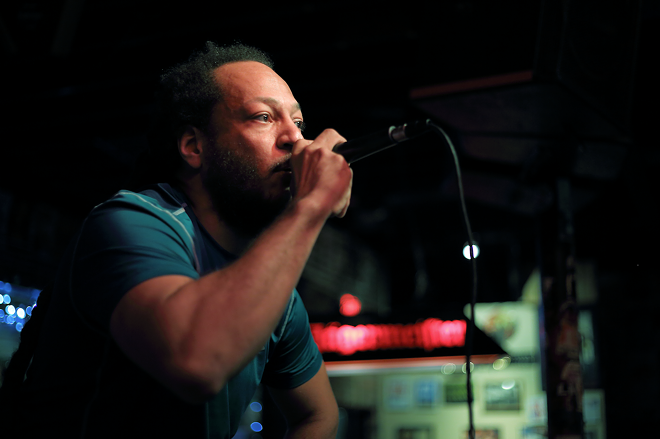 If there was ever an emcee to write a soundtrack for the moment when a global pandemic met a social revolution on the mat, then it’s BC.

The 45-year-old Tampa rapper fell in love with jiu jitsu nearly a decade ago, but he’s been grappling with the state of the world we’re in since releasing Time Pieces Part 1: Time Capsule in 2009. Eleven years later, BC is back with Time Pieces 3: The Sky, a 24-track sci-fi concept album whose album art features the Tampa skyline and an homage to the “Battle Angel Alita” cyberpunk manga.

TP3’s sound is for fans of New York label Def Jux, Brooklyn trio Company Flow and Aesop Rock. It’s for the kids who grew to love Del the Funky Homosapien and Freestyle Fellowship but not before they bowed down to the bombasticity of LL Cool J’s Radio and Bigger and Deffer. It’s themes are for listeners weird enough to rock with Midwest shock rapper Tech N9ne and the kids who’re also totally cool with spending a weekend stoned while watching “Dune” or “Total Recall.” It’s also for the ones who wonder why public schools teach about Martin Luther King Jr., but not Malcom X.

Lyrically, TP3, which was mastered by Mudd Buddha less than a month ago, is as dense and unrelenting as anything else BC’s ever put out, but it’s also eerily on point with current events despite being in the works since 2013.

“I think it is crazy to listen to his lyrics and realize that he wrote them well before there was a pandemic or the current protests going on all over the country,” Jerry "Lazy" Dufrain, owner of Orpheum and bonafide Tampa hip-hop head, told Creative Loafing Tampa Bay. “Maybe he really is a time traveler from the future.”

That’s not an accident. BC told CL that he’s the kind of person who’ll keep adding to and tweaking a project even as it’s in its final stages, right until the end.

“It’s a science-fiction kind of album, but it is very allegorical in the sense that all these sci-fi things are metaphors for things that are happening today,” he said. “So there’s always some news event that happens that I want to get in there. At some point I just had to stop myself. I had to be like, ‘OK, this thing is 24 songs deep... you’ve done too much, just put this thing out.’”

Woven within the album’s overarching theme—an internal fight, and a message for the woman and child who pulls the protagonist through it—are stacks of samples, skits, panned audio and a message that global citizens need to work, individually and together, to make the world a better place. And those who might mistake that notion for something trite or kumbaya, should just tune into how BC lays the situation out in a song like “Don’t Look Down.” On it, vocalist and songwriter Rochelle Siddiq—who’s all over the LP, along with local favorites like DJ Qeys, Wally Clark, Jon Ditty, DJ Hurley and more—helps BC paint the picture of a mother explaining life on earth to her precocious, precious offspring.

BC had the concept for the song before he knew that his daughter was on the way; it almost didn’t make the album, but her arrival last August made the track essential.

“I realized that at a certain point I would have to have conversations about how I look at the world with my daughter. Especially how I speak to her about being African American, or at least part-African American,” he said of his kid, who’s half-Italian. BC’s going to teach her about Black Americans’ rich history of achievement and how to celebrate it. She’ll know how Black people played a role in building this country, but she’ll also get “the talk” that every Black kid in America gets about contact with police.

“On the song, I had to think about how I’d speak to her about prejudices of all kinds, you know, sexism, homophobia, all of that,” BC added. “How to treat people, and in classism as well. So, that song became really important to me in that sense.”

Most important on the LP—like it’s been throughout the course of a career that’s seen BC become more cerebral throughout the releases of eight albums, remix LPs and mixtapes—is the emcee’s unwillingness to water down a message in favor of a catchy hook.

BC can certainly relate to the power and feeling of release that an N.W.A. or Public Enemy song provides, but he also knows that Black Americans had long grown fatigued by 1991 when Rodney King was captured on tape being brutally beaten down by the same L.A. law enforcement Ice Cube and his bandmates were rapping about three years prior.

On album highlight “Blitzophrenia,” BC raps that “nuance never made a good protest anthem.”

He told CL that he’s encouraged by seeing so many faces, from every race, marching against—and saying “enough is enough” to—the racial violence that’s held down Black Americans for centuries. He’s hopeful that the action will lead to the change he’s trying to rap about on TP3. He said the track’s first producer thought he was speaking against his leftist ideals. But what BC was alluding to was that the answer isn’t always that Republicans are all bad, or that Democrats are all bad, or that it’s all Trump’s fault or it’s all this person’s fault.

For BC, the truth is often somewhere in the middle of a nuanced conversation.

“It sounds great to say, ‘Fuck tha police’ in a song,” BC explained. He knows a thing or two about that, too. When he lived on Cass Street, north of Kennedy, before NoHo became a mini-Hyde Park, he constantly drove by Black men stopped on bicycles.

“It doesn’t sound good to say, ‘What makes police better is representational policing where, if you have a black community you have that proportion of black cops,’” he added. “That’s a complex answer.”

And that’s why he’s given Tampa hip-hop fans a complex album that’s—for better or worse—exactly what we need to hear right now.