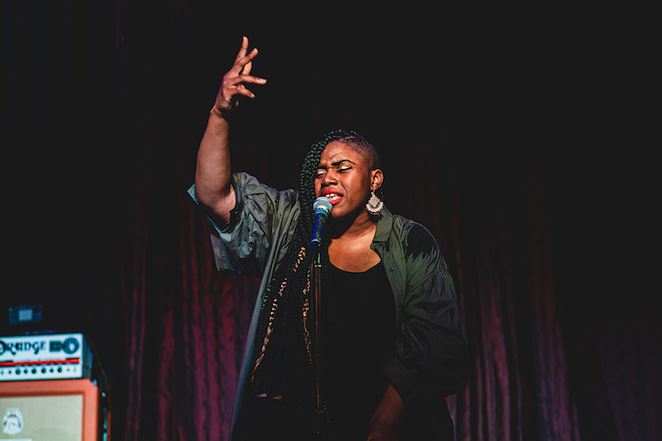 Queen of Ex has headlined gigs before, but none quite like the one she’s staging in Ybor City on Friday night. That’s when the Tampa rapper turns Crowbar into a setting that’s familiar to her, but less known to the public at large.

“Queen Of Ex Live” sets are usually in much smaller rooms, with accoutrements like special signage, lighting and even floor pillows. Past gigs have featured backup singers and the Queen delivering fiery, sometimes barefooted performances while occasionally holding hands with attendees all gathered at floor level as drummer Roger Lanfranchi (aka Rogerthomas) fills the room with beats almost as bombastic as the rapper herself. The shows have also been invite-only, until now.

“I finally wanted to make that available for everyone because everything that I want to do is live. So I wanted to finally put that on a bigger stage for everyone,” she told Creative Loafing Tampa Bay.

But Queen of Ex is no stranger to the big stage and bigger moments. She’s opened for New Orleans bounce queen Big Freedia and iconic Queens rap duo Mobb Deep, been a staple of Ybor’s since-retired Hiphopalooza, and played large festivals like Shine. In 2017, she joined a short list of Bay area emcees—including Dynasty and Mike Mass—who’ve played for shoulder-to-shoulder crowds jam-packed into downtown Tampa’s Kiley Garden amphitheater during Gasparilla Music Festival.

And what bonds Queen of Ex followers forever (because let’s face it: after you’ve seen her live, you’re a fan for life) is that they never forget their first time. The emcee born and raised on the southside of Greensboro, North Carolina hasn’t forgotten her own entrance into rap either.

Queen of Ex’s parents raised her on song. Dad is a drummer and guitarist. Mom, a music lover, filled the house with everything from funk to soul to gospel, country and even R&B. The first rap cut she fell in love with was Kris Kross’ monster 1992 single “Jump,” which she heard while watching the equalizer dance behind mom’s stereo tucked behind a glass door with magnetic clasp. The sound pulled her in, she copied the dance moves, and somewhere between the age of 12 and 13 started putting lyrics in a notebook.

“My biggest influence was my cousins; they were rappers, and the thing to do was to be around the neighborhood doing cyphers together,” Queen of Ex—who also has a degree in fashion design and marketing—said. “I wanted to be a part of it, so I started to learn how to rap just to be a part of neighborhood music.”

In the beginning, she adopted a battle rap persona, Trigga, and cultivated a fierce dedication to aggressive lyricism. Twenty years later, critics latched on the spiritual nature of her words, took notice of the still bellicose stage presence and lumped Queen of Ex into sonic piles with artists like Erykah Badu, Missy Elliott and Queen Latifah, but the core of her bars is really built on the bedrock laid down by lyricists like Black Thought, plus groups like Wu-Tang Clan and The Lox.

“I could call Jadakiss a lot of things, but let me just call him clever,” Queen of Ex said about one of her biggest influences, who’s currently enjoying a minor resurgence thanks to a dominating appearance on a recent Verzuz session against another Queen influence, Dipset.

It is possible, however, that you haven’t heard many Queen of Ex verses through your headphones or home speakers. Despite having spent undisclosed amounts of time and money in the studio, there still isn’t a session that nails the essence of Queen of Ex on tape (her most recent Soundcloud offerings are from 5 years ago, a lifetime in the creative context).

“It’s not that I’m not open, I’ve tried, but everything that they capture in a studio with me just feels so diluted. So I’ve just taken my strength—the live performance—and run with it,” she said. “Onstage, my audience, and me, we’re just free. Creatively we can do whatever I want, so I’m in the business of creative moments and experiences.”

On Friday, that experience will include Queen of Ex live band staples Rogerthomas and DJ Qeys, plus backup singers Shelby Sol (a burgeoning songwriter and singer in her own right) and Emjay all working through a set that could include at least 17 songs, including R&B songs Queen of Ex has written.

“I’m going to give people a lot of different levels of creativity,” she said. And as you watch the Queen reign and shine onstage, it’s important to remember that she sees the art being created as just a part of something else that’s bigger than any one of us alone.

“I am a vessel being utilized… maybe saying it’s bigger than myself is not the word, but it’s otherworldly, whatever it is,” she said, refusing to try and name the forces at work.

In her daily life, Queen of Ex is a spiritual teacher and an astrologer. Folks have always shared what’s happening in their own worlds with her, and when they find out how she makes a living, they ask for readings. She listens, and she gives feedback, but has always kept that part of her life—and her relationships with those who come for readings—discreet.

“I respect that vulnerability from people. You know, there would be no Queen of Ex without my spirituality, but there is a softer and more nurturing side of Queen of Ex, for sure,” she laughed.

The live set represents Queen of Ex opening up to her audience, and while she doesn’t create music to necessarily help people, she’s glad her performances have always served that purpose for some.

“'I'm just sharing my world and my experience,” she said. “And if you just so happen to vibe with it, then thank goodness.”

Read his 2016 intro letter and disclosures from 2022 and 2021. Ray Roa started freelancing for Creative Loafing Tampa in January 2011 and was hired as music editor in August 2016. He became Editor-In-Chief in August 2019. Past work can be seen at Suburban Apologist, Tampa Bay Times, Consequence of Sound and The...
Scroll to read more Local Music articles