The 16-date jaunt kicks off in St. Petersburg on Saturday.

Charles Irwin, a favorite among Tampa’s underground bands, is holding a long-awaited party for its debut full-length, Beach Lake Park, which saw release a few weeks ago.

The gig at St. Petersburg DIY spot Paper Crane promises to be a blowout complete with new merch, a disco ball, confetti and a lineup stacked with Floridian bands. It’s the perfect kickoff for Charles Irwin’s first tour: a 16-date, three-week trek up and down the east coast that visits cities like Asheville, Savannah, Philadelphia, Brooklyn and Washington D.C. It’s an ambitious outing for a band that’s never been on tour, but these guys apparently really go for it when they decide to do something.

How to describe Charles Irwin’s sound? Imagine the harmonious groove of Beatlemania coupled with the vocal tone of Vance Joy and the benevolent attitude of today’s upbeat indie standouts. After dishing out a grab bag of tracks that garnered a healthy buzz online (one upload of “A Sad Song About A Girl I No Longer Know” has earned more than 6 million YouTube views since 2017), Beach Lake Park marks the band’s most cohesive release to date. It’s a collection of dreamy, guitar-saturated, emotional and experience-driven bops; the 13-track LP is essentially a soundtrack to growing up and figuring shit out.


Guitarist Gabriel Perez, who answers almost exclusively to “Salad,” told CL that putting the album together took longer than expected. That can happen when your parents are sleeping across the hall from your recording space.

As the location of its home-base studio may suggest, Charles Irwin is a young band. That’s not to say inexperienced or even new to the Tampa music scene, but truly young. At 18, Charles Irwin’s soft-spoken lead vocalist Matthew Hartshorn and drum aficionado Micah Gilbert clock in as the band’s youngest members. Salad is 20. Esteban (or Ban) Martinez is 25 and known affectionately as the big brother of the band.

When the guys unplugged for the night while recording the album, they’d head to a quiet spot down the street, hop a fence and breathe in the night air at a sandy little lakeside park across the way. There, they’d talk about the music and the plans that they had — plans that are now coming to fruition. That spot became Charles Irwin’s refuge while recording the album, and it eventually became the inspiration for the name of the album itself.

“That first track,” Gilbert said, “any time I hear that song, it just reminds me of being there at night chillin’.”

When I arrived to catch up with the minds behind Charles Irwin, I squished into a roughly 9-by-9-foot room with a drum set, two guitars, sound equipment, the band and a few friends and teammates. Hartshorn’s mom brought in seltzer water and ice cream cones, and the guys riffed back and forth about who has the best skateboard tricks, what is the best Vietnamese food in town, and, of course, whether or not to put googly eyes on the horse they painted on the face of the drum set. That idea sent the guys into a fit of laughter. It’s definitely happening. The camaraderie runs deep.

Martinez and Salad can do an ancestral investigation to establish their status as distant cousins; the Matt and Micah friendship goes back to the days of their 6th grade band called The Egomaniacs. Still, the guys will tell you that their brotherhood, and the band, really took shape at Tampa’s Sunny FLuff Skate Shop, a since-closed Town & Country spot a half-hour drive away from Charles Irwin’s home studio and rehearsal space. Martinez, the elder, ran Sunny FLuff with friends back in high school as a hangout for skater kids.

“The skate shop was really just a hub,” he said. “We wanted younger kids like Salad, Micah and Matt to have resources and a place to go, things to do, to express themselves.”

As a kid, Martinez always wanted to make music, but without peers who shared his dream, he began to accept that a musical career might not be in the cards. Over the years, however, Martinez began to take members of the future Charles Irwin under his wing. He taught Salad to play guitar and encouraged Matt and Micah to pursue their passions. The guys were all kicking around the shop one day when Salad confidently, if not randomly, exclaimed, “We’re going to start a band.” A shared dream started to take shape. 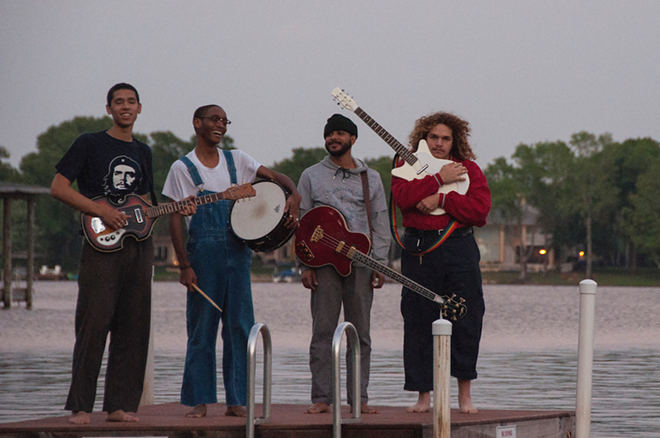 “I remember when we first got the van,” Martinez said. “I was driving the van down the highway and I had this moment, a super emotional moment where I was like, ‘Holy shit, I’m driving a van to a show with my band.’ For 16-year-old me, that was it. This is exactly what I would hope to be doing at this point.”

From then on, things seemed to flow. The guys’ shared love of bands like Twin Peaks and Good Morning, along with their dedication to authenticity and fierce love and loyalty to one another, have led to a seemingly seamless creative process and vision.

“It’s more than a band, it’s a brotherhood,” Salad said. “The music is obviously very important, but if somebody’s not feeling something, we all make a point to say, ‘If you don’t want to do that we don’t have to,’” Salad said. “It’s all four of us. Nobody leads. We see no point in that, because there’s going to be conflict for no reason, you know, and we want to do this for the rest of our lives.”

With the help of friends and supporters, Charles Irwin is stepping up its game, deep diving into unique album art, handmade buttons and a refreshing social media presence that reflects the kind of professionalism, authenticity, humility and longevity that the band aspires to. And at the end of the day, it’s all less about the members of Charles Irwin and more about the music.

“You’re not the shit,” the ever-humble Hartshorn explained. “The music that’s flowing through you and coming out of you is the shit.”