Go have an 'Awful' time with this free show at The Bends. 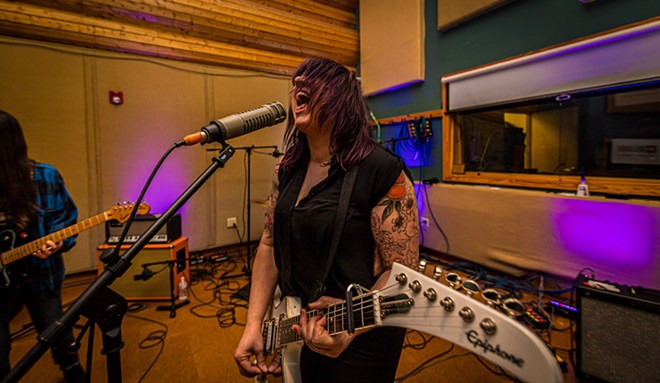 Dave Decker
Nervous Girls recording a live session during an episode of Grand National Championships at WMNF in Tampa, Florida.

In September, Tampa rock band Nervous announced a new album, A Thousand Awful Thoughts, then gave its fans a different kind of awful news—the gig celebrating the record’s release would be the trio’s farewell show.

“We are so grateful for the love and support the Tampa and St. Pete community has shown us over the years,” the band added.“ There have been so many high points along our journey, and so many people, bands, and venues to thank. We hope we will get to see you one last time to say goodbye and thanks.”
That chance finally happens this weekend with a free show at The Bends where Wolf-Face and Big Sad play openers. Awful’s eight tracks find Nervous Girls tapping into the band’s uncanny ability to meld genres (‘90s grunge, shoegaze, punk), and the lead single “Nights” has a little Cranberries flavor to go along with the brawny ‘80s, almost Pretenders-style punch packed into album highlight and closer “Echoes.”

Support local journalism and a small but mighty team works tirelessly to share music news, events and concert announcements as the Tampa Bay music scene recovers from coronavirus shutdowns. A one time or monthly donation supports our staff, and every little bit helps. Subscribe to our newsletter and follow @cl_tampabay on Twitter.