After a six-year hiatus, long-time friends Justin Myers and Anthony Tarallo are making a comeback. 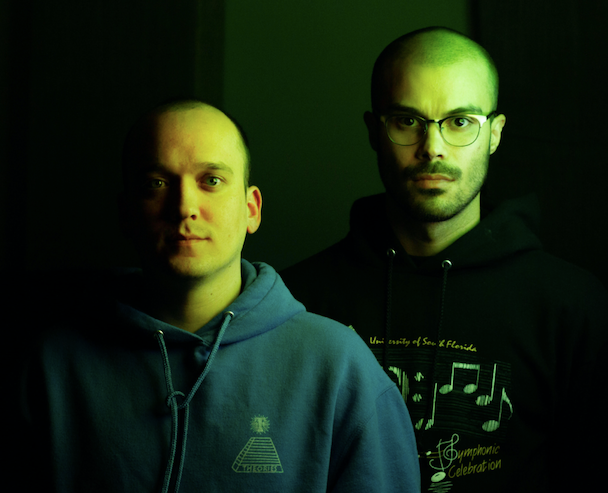 AMY KATE PHOTOGRAPHY
WELCOME BACK: The duo (L to R) made up of long-time friends Justin Myers and Anthony Tarallo are making a comeback after a six-year hiatus.

With Tempus Projects’ 10 year anniversary and relocation, this weekend — change is in the air for fellow creatives. Alien House, a Tampa-born electronic duo, is making an official comeback after a six-year hiatus.

Alien House is comprised of long-time friends Justin Myers and Anthony Tarallo. The pair decided to take a step back from the music in 2013, but they are ready to take the Tampa Bay house scene by its horns. Their return has been a long time coming; Myers and Tarallo put Alien House on the backburner for the last few years but instinctively knew they would join forces once again.

Cue Tracy Midulla, owner of Tempus Projects, who requested Alien House to play at the gallery’s upcoming 10-year anniversary celebration “X: A Decade of Tempus Projects” on December 14. The guys saw the opportunity as the perfect opportunity to make their return to the Tampa electronic scene. Especially since the two consider Tempus as utterly integral to the formation and success of Alien House.

IF YOU GO X: A Decade of Tempus Projects

“When Tracy reached out to us to see if we were willing to do a show, we had to say yes. It was a big deal because it meant that we have to get together and start writing new material,” Myers told CL. “It was the catalyst we needed to get back in the mode of writing. We work well under pressure.”

Alien House formed nine years ago when the longtime friends and musicians naturally started writing and experimenting together. They spent countless hours practicing and figuring out their sound at Tempus Projects, which was then considered an up-and-coming gallery. Myers was a college student of Midulla at the time. Midulla eventually asked him to play a show at Tempus Projects, marking the first official Alien House show in 2010.

After gigging consistently throughout the Bay area for three years, Alien House took a hiatus as the number of shows started to wane, people in the electronic scene in Tampa Bay started to move to other cities, and smaller venues throughout the area started to close. They felt an intrinsic, natural stopping point.

“We got real active really quick, and we realized we needed some time to just not create music,” Myers says.

“The scene had shrunk a little bit. A lot of the people who were around during the formative years of the Florida electronic music scene started moving away,” Tarallo added, “It felt like the end of a certain era.”

Alien House marks 2013 as a transitional period in the electronic scene where EDM, the role of the DJ, and dubstep were getting popular fast. Alien House slipped in-between the cracks of the genres—they weren’t deejays and they weren’t a band, which resulted in the pair slowly started to lose their footing.

Although Alien House was put on pause, Tarallo and Myers never took a break from music. The hiatus gave them time to focus on their personal lives and solo projects.

“It gave us time to refine our own skills, write more music and experiment with different types of equipment on our own,” Myers reflects on their six-year break.

The band’s six-year snooze was filled with natural obstacles of early adulthood, exploring solo projects, and honing in on what makes them each unique songwriter — all while remaining best friends. The pair recorded an album between 2013 and their most recent single “Nylon_Basin” released in 2018, but it was lost in a classic, yet unfortunate tale of a fried hard drive.

It wasn’t until 2017 when they released a split tape of their solo projects, Myers under the name ‘Justin Depth’ and Tarallo under the moniker ‘Gella,’ until they started toying with the idea of an Alien House resurgence. Encouragement from their friends and fellow Tampa band, Brother Cephus, nudged the two closer to write together again.

With the upcoming reunion show at Tempus projects helping Tarallo and Myers getting back into the swing of things and the Florida electronic scene welcoming Alien House back with open arms and minds, 2020 is set to be a year of rebirth for the house duo. A Florida tour and recording of their newly written material is tentatively on the horizon, and the pair is ready to share the new Alien House sound with the world, whatever that sound may be.

“We always joke about no matter what we do, what we use or when we decide to make music — it always sounds like Alien House song…there’s just this specific sound we produce when we’re together,” Myers tells CL. “We’re not sure what it is, but it’s definitely an Alien House sound.”

Alien House is a representative of the legacy that Tempus Projects will continue at their new space in Ybor Heights —a space for the pulsing underground art scene to experiment and build community. They’re back in motion, writing and practicing for their upcoming set at Tempus Projects at Brother Cephus’ Sponge Studio in Tampa.

For this weekend’s show, Alien House is aiming to create an ambient, dance-induced atmosphere filled with seamless transitions at this momentous set. “X: A Decade of Tempus Projects” will be a celebration in all senses of the word.