More than 40 artists are due playthe 2016 edition of GMF.


The past four years has seen Gasparilla Music Festival grow into a viable, noteworthy event that drew 20,800 attendees over two days in 2015 despite being a nonprofit grassroots endeavor with a rather small organizational core. Falling on one of the most pristine weekends of the year — right as the weather is on the verge of turning from mild to over-warm and the humidity hasn’t yet saturated the breezy air — the fest showcases the brightest stars of our local culinary and musical landscape while bringing some first-rate national talent to the heart of downtown Tampa.

In its fifth year, GMF pushes further south past Curtis Hixon Park and Kiley Gardens to the nearby MacDill Park, adding a fifth stage (which has a Latin focus on Sunday, see insert), opening up the Riverwalk to connect the three concert areas, and simultaneously bringing another level of scenic waterside leisure to the two-day event.

The 2016 lineup definitely warrants the expansion. Leading the fray of more than 40 artists is one mighty fine R&B grooving, jazz-hawking and hip hop bumpin’ songstress, Erykah Badu, who first caught ears with her classy yet sassy kiss-off ode, “Tyrone,” and dropped a new mixtape, But You Caint Use My Phone, in November. Also headlining are alt country, punk-kicking favorites Lucero, currently on tour behind their 2015 11th studio album, All a Man Should Do;  Michigan’s string-fueled Americana jammers Greensky Bluegrass; roots reggae royalty Stephen “Ragga” Marley, son of Bob and Rita; and vibrant Midwestern roots-folk quartet Houndmouth.

Overall, it’s gearing up to be a most unforgettable edition of GMF and we can’t wait to get out and enjoy it. 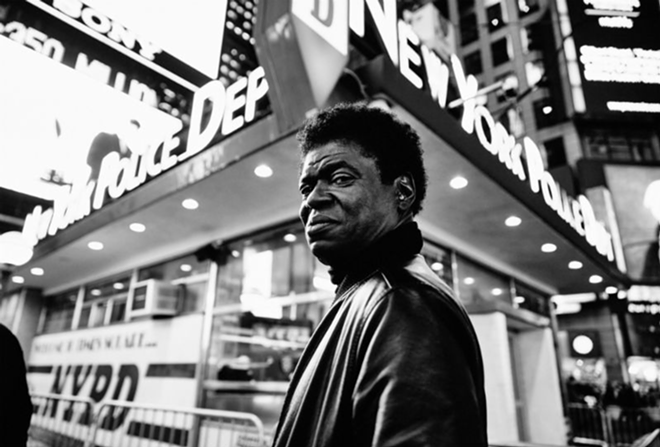 The brand new Latin Stage
GMF has dedicated the new stage in MacDill Park to local and international Latin artists during its day of music on Sun., March 13, offering a limited quantity of $20 “Latin Stage”-only tickets and showcasing the eats of a food truck new to the fest, Rafi’s Rollin Ricans.

The recent loosening of travel restrictions to Cuba is reflected in the Latin Stage’s headliner, Cuban folk hero and a noted artist in the nueva trova movement, Carlos Varela. He’s been called the “Cuban Bob Dylan” by some and is regarded as the as the country’s ostensible poet laureate, his 30-year career celebrated while his music simultaneously introduced to new audiences in recent HBO documentary The Poet of Havana.

Also performing is rising Puerto Rican stars Pirulo y la Tribu, currently nominees for Best Tropical Album of the Year in the 2016 Billboard Latin Music Awards and hailed as re-inventors of Caribbean music for their fusion of Nuyorican salsa, Afro-Cuban son, and Puerto Rico-style bomba. Rounding out the stage is Bay area staple Sol Caribe, which churns out a high energy mix of salsa, cha cha and meringue, and Larry Duran, an emerging local songwriter of beat-pumping cumbia.

MacDill Park is located at 100 N. Ashley Drive, south of Curtis Hixon Park, and is accessible via the Riverwalk. Latin music is featured on this stage Sun., March 13, from noon to 6:30 p.m.

Related Event: Recycled Tunes Instrument Exchange
Gasparilla Music Festival is still a nonprofit endeavor and carries out its objective of supporting and promoting music and education in the Tampa Bay community via Recycled Tunes, an outreach program that provides instruments to local schools and youth music programs.

Guitars, keyboards, horns and other music-making devices are collected at instrument drives like the Recyced Tunes Instrument Exchange and are refurbished with help from a local music store (Don Banks Music is the usual participant) before making their way to their final destinations.

If you have a gently used instrument at home collecting dust with disuse, bring to this year’s exchange at 3 Daughter’s Brewing (222 22nd St. S., St. Petersburg) and trade it in for a free 2-Day general admission ticket to GMF. The exchange event happens on Sun., Feb. 28, from 2 to 5 p.m. All donations go to Pinellas County Schools. Check out the Facebook Event page here.