The Isley Brothers performed the classics and a handful of tributes at St. Pete's Mahaffey Theater

The Isleys managed to be loose, spontaneous, even a little sloppy at times. The Isley Brothers, a celebrated American treasure, put on shows that just make folks feel good. That may sound trite, but it’s extremely hard to do night in and night out. It’s the mark of being a consummate pro. The Isleys concert Thursday at The Mahaffey Theater was part roadhouse, part coffeehouse, part tent revival, part Broadway show, part rock concert — all adding up to their own version of rhythm & blues revue.

The 100-minute set wasn’t substantially different from the one they delivered in August 2017 at the same venue. But Ronald and Ernie and company performed both shows with such verve, created such a visceral bond with the audience, that the redux didn’t matter. They appeared for all the world as if they’d rather be nowhere else but on the Mahaffey stage. Which is hard to do night in and night out.

Three dancers and two background singers infused the performance with added joy. (I wanted to ask one of the dancers if maintaining a high-wattage smile for such long periods required training.) The six-piece band stayed in the shadows. They were not introduced and did not play a single solo. (Pity the lone saxophonist who was barely audible.) But the ensemble’s rock-solid support was essential.

The two surviving Isley Brothers are a study in stark contrast. Guitarist Ernie Isley, 67, clad in a sparkly vest with no shirt and his trademark black do-rag, is all business, playing tireless rhythm and channeling Jimi Hendrix on solos. Singer Ronald Isley, 78, is the ringleader, a trickster, a teeth-gleaming frontman who plays the past-his-prime lothario with giddy camp. He strutted on stage pimped out in a red suit, broad-brimmed hat and gold-handled cane. Later, he removed his jacket, wearing a vest with no shirt underneath, revealing a lumpy upper body with a modicum of muscle tone that wasn’t bad for a near-octogenarian. He then proceeded to pose and let the crowd behold him. It was hilarious.

Ronald, with his sweet tenor, was never a belter, so his diminished vocal chops were less than obvious. He can no longer sing with the elegant sustain of his younger years, but he did reach high falsetto notes and color his singing with melisma and improvisational conceits. He’s like an old basketball player who can no longer drive to the hoop, but picks his spots and knocks down open shots. (He sat on a fancy red stool for about half the show.)

The ensemble took the stage to a recorded version of Prince’s “Let’s Go Crazy,” and then launched into one of their funkier numbers, “Fight the Power,” followed by the rockin’ “That Lady,” a showcase for Ernie’s guitar work. The Isleys served up a generous helping of their bedroom songs — mid-tempo and ballads — including “Groove With You,” “Smooth Sailin’ Tonight,” “For the Love of You,” Footsteps in the Dark,” and “Voyage to Atlantis” (where a dancer, draped in flowing purple, glided around the stage performing sensual balletic moves).

They also included their two most popular cover tunes — a sultry rendition of Todd Rundgren’s “Hello It’s Me,” and a rather miraculous remake of “Summer Breeze” that transforms Seals & Crofts’ insipid quasi-folk tune into a stirring ballad, driven by Ernie’s biting guitar riff. 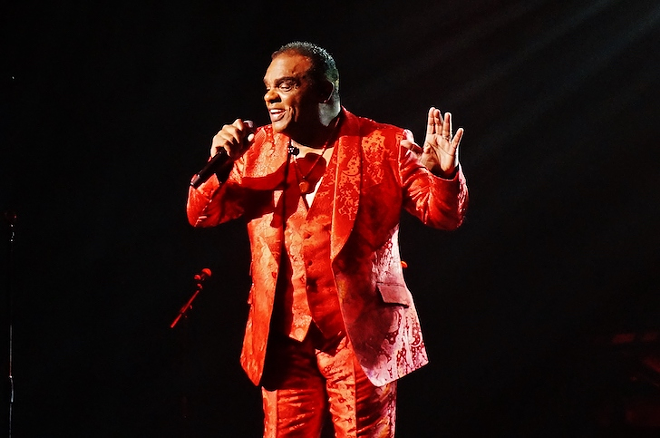 Like the last Mahaffey show, the Isley’s omitted the breezy and utopian “Harvest the World,” my favorite tune of theirs. (To quote Joe Walsh: I can’t complain but sometimes I still do.) As per usual, they closed with their first hit — the 60-year-old, ever-enduring “Shout,” where they snuck in snippets of James Brown’s “Gonna Have a Funky Good Time” and “Shake Your Moneymaker,” but left out the breakdown (“a little bit softer now,” “a little bit louder now”) in favor of an extended Ernie solo over a shuffle groove.

Part of what makes an Isley Brothers show so fun is the tricks and crowd-pleasing riffs they add: handing a microphone to a woman in the crowd to sing “Sweet Thing,” inviting a half-dozen women from the audience to dance along to “Twist and Shout,” handing out roses from the stage, Ronald’s frolicsome flirtations with women in the front rows, and more. These are cliches, for sure, but they’re delivered with such glee (mixed with a bit of wink-wink irony) that they don’t come off as hackneyed.

The Isleys somehow perform a scripted show that manages to be loose, spontaneous, even a little sloppy at times. That’s hard to do night in and night out.