These are the bands that influenced Tampa emo band Pohgoh

Listen to a playlist before Pohgoh releases its new album on September 7. 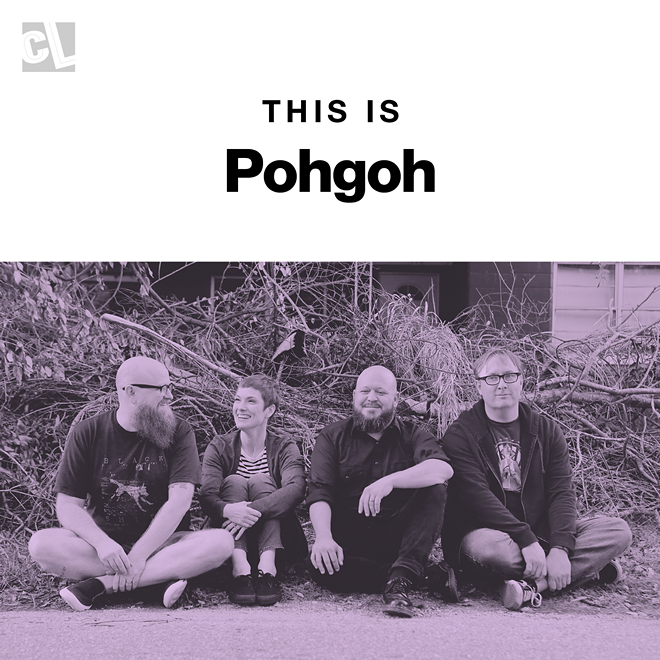 Twenty-one years is a long time, and a lot of music can seep into an artist's influences within that time period. Pohgoh — a Tampa band set to release Secret Club, it's first album since 1997, on Sept. 7 — is the subject of the music feature in this week's issue of Creative Loafing Tampa.

And while we focused on frontwoman Susie Ulrey in our piece, Pohgoh's other members, along with Susie, were kind enough to share some of the songs that influenced them in the years before the band's 1997 debut (Pohgoh's new album, Secret Club, sees release via Tampa's New Granada Records).

"These are songs that influenced each of us individually as we were learning our instruments or directly when Pohgoh started in 1994," drummer Keith Ulrey, Susie's husband, told CL.

Mixed in with Pohgoh's songs are cuts from 80s rock band Hüsker Dü, pioneering D.C. punk group Minor Threat, 90s indie-rockers Versus and another Big Apple alt-rock outfit Madder Rose.  Among the highlights is Boston songwriter Juliana Hatfield, who was a big influence on Susie.

"Any band I will ever be in, past/present/future will reference Juliana Hatfield. Period," Susie told CL. "She was living proof that I could be in a band."

Bassist Brian Roberts wasn't a part of the band when it released its 1997 debut, but he was part of the same scene and group of friends that Pogoh played in two decades ago.

Read explanations of the songs, listen to the playlist and get more information on Pohgoh's album release show below. Read our feature story on Pohgoh in the new issue of Creative Loafing Tampa or online via cltampa.com/music. Call your local record store to see if it is carrying the release.

HÜSKER DÜ: "Eight Miles High"
The song I heard that immediately made me want to learn to play guitar.

SUPERCHUNK: "Precision Auto"
Mac’s guitar style is responsible for about 70% of my "bag of tricks.”

YO LA TENGO: "Blue Line Swinger"
If you ever saw the end of a Pohgoh set in the 90’s, you saw this influence worn on our sleeves.

SEAM: "Berlitz"
Pretty much responsible for all of Pohgoh’s “slow-but-heavy-and-intense” vibes.

TEARS FOR FEARS: "Shout"
First album I ever bought myself.

7 SECONDS: "Satyagraha"
Second concert I ever went to.

LEMONHEADS: "Half The Time"
One of the first songs I learned on guitar.

ALL: Sex In The Way

MINOR THREAT: "Salad Days"
Just as I was beginning to learn/play drums, this was the song that made see drums in punk/hardcore in a different light. Opening drum beat still gets me going.

JAWBREAKER: "Busy"
One of the first cover songs I remember learning with my first real band, challenging me to control what I was doing and follow patterns.

VELOCITY GIRL: "Audrey's Eyes"
Not particularly an influence on me as a drummer, but this song/band was 100-percent a reference point in our direction when we started. We even ended up covering it early on.

VERSUS: "Blade of Grass"
Opening for, seeing Versus in January 1995 was mind-blowing and a gamechanger for us.  To this day, we cite Versus as one of our No. 1 influences on the band.

MADDER ROSE: "Panic On"
At one of my first practices with the band, Keith cited Madder Rose and it’s pretty spot on as an influence.

JULIANA HATFIELD: "My Sister"
Any band I will ever be in, past/present/future will reference Juliana Hatfield. Period. She was living proof that I could be in a band.

IDA: "Backburner"
Gorgeous, earnest. The kind of song that is so good it makes you want to write.

PIXIES: "Gigantic"
One of the first songs I learned to play with a band.