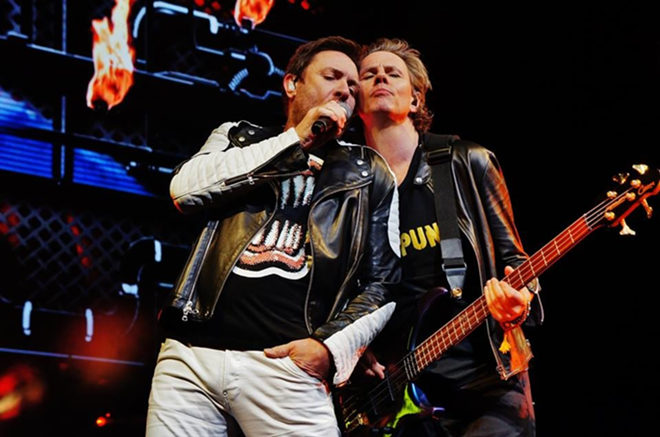 Today in rock history: on this date in 1979, future mega-popular band Duran Duran played its very first ever live gig. The band, then a threesome, appeared at the Lecture Theater located within the Birmingham Polytechnic school where founding member John Taylor and original lead singer Steven Duffy were students. The original lineup consisted of Taylor on guitar, Duffy playing bass and handling lead vocal duties while co-founder Nick Rhodes added his keyboard work and operated a drum machine. The band would go through various lineup changes before becoming the well-known quintet that landed a major label recording contract and released its debut single, “Planet Earth” in 1981. Within three years after its first single, Duran Duran would become one of the most popular and most recognized acts in the world.

Today in rock history: on this date in 1994, the meteoric rise of punk/grunge band Nirvana came to a crashing halt as a result of the death of lead singer and chief songwriter, Kurt Cobain. Cobain had expressed plenty of distaste for the sudden popularity that had been thrust upon the trio since the release of its 1991 blockbuster album, Nevermind. The artist was found at his home in Seattle, Washington with a head wound and a shotgun near his body. A suicide note was left behind which suggested that his death was pre-planned. Various theories have arisen since Cobain’s death with many suggesting that he hadn’t actually shot himself and that there was some foul play. Fans of Nirvana and of the new era of music they’d ushered in were devastated, and the general feeling was that the spokesman for a generation was gone.

Today in rock history: on this date in 1980, the group of musicians which would come to be known as R.E.M. played its first ever live gig. The quartet hadn’t yet decided on a band name when the show occurred; the performance was intended as the musical entertainment for a friend’s birthday celebration, and it took place at St. Mary's Episcopal Church in the band’s home city of Athens, Georgia. The church building had been transformed to a space where artists gathered and hung out. Lead singer Michael Stipe and guitarist Peter Buck often frequented the spot that would become the historic locale of the launch of this highly-regarded band. The then-unnamed band played two sets of music that consisted mostly of cover tunes from artists like The Velvet Underground, The Troggs, The Young Rascals, Funkadelic and The Sex Pistols. The band would release its very first single on a small independent label in 1981 and, by the next year, would be signed to leading American indie rock label, I.R.S. Records.

Today in rock history: on this date in 1971, Chicago, the rock and pop band which ruled radio airwaves throughout the 1970’, became the first American rock band to perform at New York City’s prestigious Carnegie Hall. Known mostly for its symphonic and orchestral performances, Chicago’s six-night residency at the hall was unprecedented at the time. The large, multi-instrument group, known for its top-notch horn section, recorded its performances at the world famous venue in order to release a concert document of its historic concerts. The result was a 4-LP box set which was the band’s first-ever live concert album release. The set, which rose to No. 3 on Billboard’s pop albums chart soon after its release in October of 1971, included two posters and a deluxe photo booklet within the elaborate box the records came packaged in. The record achieved gold sales status not long after its release and, later, would achieve a platinum sales award as well.