Today in rock history; Public Image Ltd. trolls NYC, Squeeze's East Side Story is born and so is Brian Eno

The band was promoting their third album The Flowers of Romance and were booked as a last minute replacement for Bow Wow Wow who'd cancelled their appearance. After waiting for hours in the rain to be let in, attendees again waited until 1 a.m. before the band took the stage....or did they? At one point,

Lydon allegedly played the band's new record on a turntable over the PA and lip-synced to it; later, a large screen was lowered and the band performed behind the screen so that the now anxious, frustrated and drunken crowd was only able to see shadows projected from behind the screen from their perspective. As beer bottles were hurled at the screen in protest, the scene became violent as angry patrons took to the stage to rip down the screen and toss all of the band's gear off the stage. A riot erupted and the scene got ugly. The band was able to safely make it to their dressing rooms and were not harmed. A second performance scheduled for the following night was immediately cancelled. 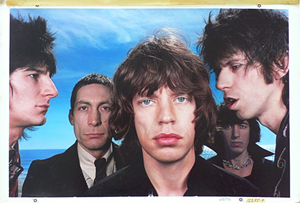 garyrocks.wordpress.com
Album artwork for the Rolling Stones' 'Black and Blue,' shot by Hiro.

Today in rock history, on this date in 1976, The Rolling Stones hit the no. 1 spot on the Billboard Album Chart with their fifteenth album, Black and Blue. The album was the first to feature the newly acquired ex-Faces guitarist Ron Wood on it. Two singles were released from the album, "Fool To Cry" and "Hot Stuff". And, of local interest, the cover photo and the inner gatefold photo were taken during a photoshoot on Sanibel Island with renowned fashion photographer, Hiro.

Today in rock history, on this date in 1981, British pop band Squeeze released their fourth album, East Side Story. The album was produced by Elvis Costello although the original concept for the album was to make it a two-record set and to have Costello and three other producers each handle production duties on individual sides. The band opted instead to go with Elvis and make it a single record...and what a record it is.

Here, the band, and their ace songwriters Chris Difford and Glenn Tilbrook, dabble into rockabilly, Motown-inspired pop, psychedelia, country as well as their own personal blend of smart, witty pop music.

Although already a popular singles band in the UK, this was the album that gave the band their first charting hit single in the States with "Tempted". Sung by temporary member Paul Carrack, who'd soon leave the band to pursue a solo career, this is one of Squeeze's most recognizable songs and one of the many great songs of their catalog. Easily one of the best and most consistent albums of the 1980's.

Born on this date in 1948 in Woodbridge, Suffolk, England: musical innovator  Brian Eno . Besides his work as a member of Roxy Music's earliest incarnation, the work he's done as producer for so many great records ranging from the Bowie Berlin-era albums through releases from Talking Heads, Devo and U2 make him a legend. Add to that all the fantastic solo albums he's released too. A true musical visionary indeed.