An impressive slate of concerts are happening on this Fri., Jan. 15. Breakdown here, plus a peek at the weekend ahead. 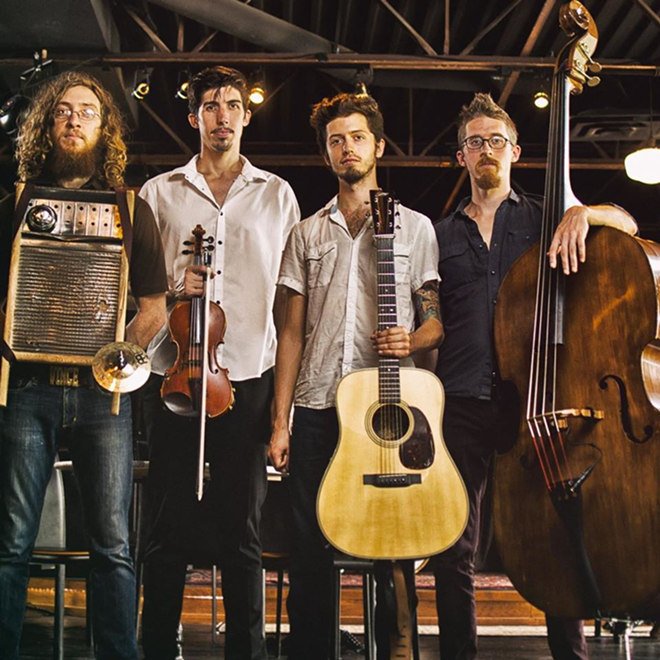 Lots happening on this Fri., Jan. 15. Take a look at the breakdown below, then peep what's coming up this weekend.

Starlito with Don Trip Noisey.com called Starlito’s songs “memoirs of a life that blurs the line between lawless social outcast and prophetic cultural hero.” He has a molasses slow drawl and the production qualities on his new Inversion mixtape are equally lethargic. While Starlito came up affiliated with Yo Gotti, Lil Wayne and the Young Money crew, frequent collaborator Don Trip (who performs with Starlito as one-half of Step Brothers and joins him on his current tour) was discovered by Cee Lo Green (he laid down a hook on Don Trip’s 2011 single “Letter to My Son”), and has a more aggressive rhyme-flinging style and sound. (State Theatre, St. Petersburg)

Scott Stapp The deep-voiced frontman of on-hiatus-until-further-notice rock band Creed has a few solo albums out – the last was 2013’s Proof of Life – and he takes that material on the road as backed by a full band. Don’t fret, however; he peppers his sets with Creed hits, too. (Palladium Theater, St. Petersburg)

Landau Eugene Murphy, Jr. A jazz singer who won the sixth season of America’s Got Talent with a spot-on rendition of “My Way,” and followed it with a debut album, That’s Life, jam-packed with other Sinatra standards. (Jaeb Theater at the Straz, Tampa)

erez avissar
Mothers
Mothers with DieAlps!, Soapbox Soliloquy Paper Bag listed Mothers as one of ‘10 Musicians to Watch in 2016,’ debut single “No Crying In Baseball” marked by interweaving notes of dissonant guitar and ambling tempos that slow down to a crawl about half-way through as the potent-pretty vocals of frontwoman Kristine Leschper wheel and soar in streams of raw consciousness over top. She told Stereogum the track is about being “willfully vulnerable,” and the album that spawned it, When You Walk A Long Distance You Are Tired, is due out in February. (New World Brewery, Ybor City)

TroyBoi London trap DJ/producer TroyBoi has risen in the EDM ranks by way of a few notable 2015 collabs, first in “Soundclash” with Flosstrodamus, then later that fall in his “Afterhours” joint with Diplo and Nina Sky. New track “Ili” is built on a groove-womping riff of synths, soulful female vocals spliced into an “I like it” refrain, and wheeling and bumping hip hop-and-electro-rooted beats. (Amphitheatre Event Facility, Ybor City)

The Soft Moon w/Empire Cinema/Sleeping Pills Killing Joke may have canceled but the show is going on as planned, with tour opener The Soft Moon — a post-punk outfit from Oakland, Calif. that infuses their bleak sound with Krauty, Dark Wave, psychedelic and industrial texture — taking up the headlining slot. (Orpheum, Ybor City)

Teach Me Equals, PLEASURES, Not a Planet, Spirits and the Melchizedek Children Teach Me Equals couple Greg Bortnichak (cello, sequencing, vocals) and Erin Murphy (guitar, vocals, violin) finally tied the knot and are celebrating their nuptials with a big ol’ multi-band blowout in their Sarasota hometown. Luckily for us, we’re close enough that the art rock duo booked this Friday night date featuring a few of the acts that’ll be joining them on Sunday – fellow Sarasotan electro-psych rock grinders PLEASURES, soulfully propulsive indie rock trio Not a Planet, from Kansas City, and Atlanta’s trippy-forlorn folk outfit, Spirits of the Melchizedek Children. (The Amsterdam, St. Petersburg)