Shows happening this Thurs., May 14 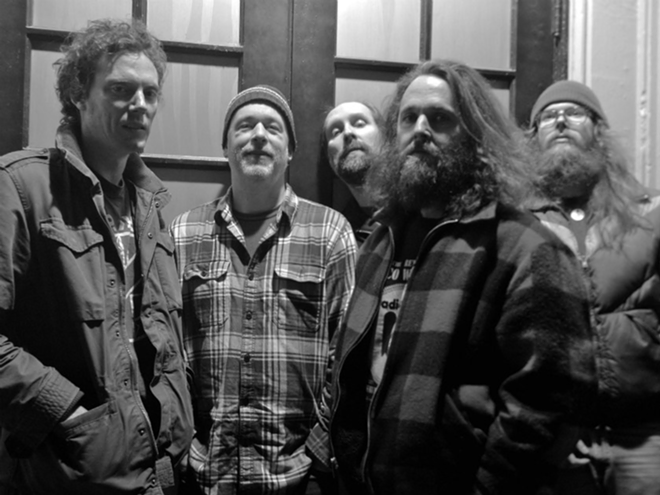 A look at some shows happening this Thurs., May 14, with other live music happs taking place all over town listed at the bottom of this post. Enjoy, and get to planning.


Built to Spill with Wooden Indian Burial Ground, Clark & the Himselfs It was about six years befpre we saw a new album from Northwestern indie rock favorites Built to Spill. According to reports, frontman/guitarist/primary songwriter Doug Martsch had reached critical burnout mode when Built to Spill finally hit the studio to record the follow-up to 2009’s There Is No Enemy, and after the departure of longtime rhythm section members Scott Plouf and Brett Nelson, and the introduction of their replacements (bassist Jason Albertini and drummer Stephen Gere), he scrapped it and started all over. Untethered Moon finally dropped last month, first single “Living Zoo” driven by the fuzzy yet catchy guitar hooks and shredded progressions for which Martsch is so renown. And if the name of Wooden Indian Burial Ground doesn't lure to lure you to the show early, the trio’s raucous psych-garage sounds should be motivation enough. (State Theatre, St. Petersburg)

Guerilla Toss If you feel the need to see some forward-thinking music BOTB-winning vinyl shop Microgroove brings a free show to the neighborhood: Boston, Mass. outfit Guerilla Toss, which has been all but officially canonized as Beantown’s kings of trippy, no-wave psych punk. A sold-out November 2014 cassette, Smack The Brick, upped the ante on the freakfest that was their January 2014 effort, Gay Disco, and while more conservative ears might dissuaded from checking out an energetic live show that can only be described as weird, everything the band has released thus far is just accessible enough to bring even the most timid music-curious soul to the front for a dance party. Permanent Makeup side projects Piss Ghost and Taxer warm up the show, and donations will be collected for the touring bands. (Microgroove, Tampa) –Ray Roa

John Mayall Though he’s not a household name in the U.S., British multi-instrumental bluesman John Mayall is a revered and influential presence in rock n’ roll, and he’s had the sidemen to prove it: Eric Clapton, Dr. John, Mick Taylor, John McVie, Sonny Landreth and Paul Butterfield among them. All played in his esteemed Bluesbreakers before moving onto their respective careers, while Mayall continued trucking and molding more rising talents along the way. His smoky soulful vocals, and prowess on guitar, organ, piano and harmonica have spanned five decades and upwards of 56 albums, and he shows no signs of hanging up his spurs quite yet. Latest full-length A Special Life dropped last year and the 81-year-old is currently knee deep in his second world tour behind it. (Capitol Theatre, Clearwater)