A look at concerts happening this Thurs., Feb. 25. 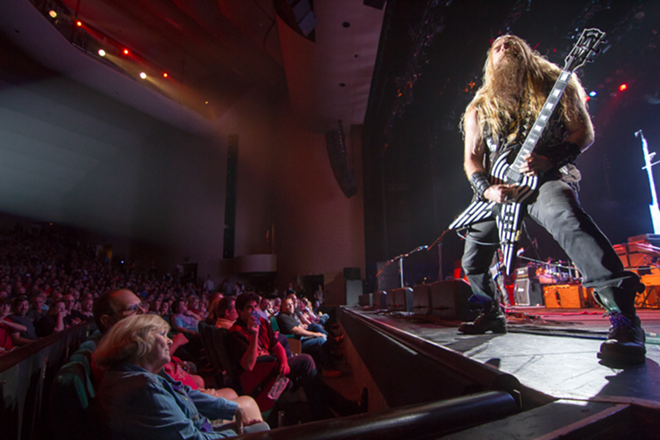 Tracy May
Zakk Wylde shredding at Experience Hendrix in 2014; he returns to Ruth Eckerd Hall with the 2016 tour tonight.

It's not quite Friday yet, but the concert schedule has already picked up in earnest. Check out the live music highlights for this Thurs., Feb. 25, below.

Benise: Strings of Passion Tour Strings of Passion: A 10-Year Mosaic is both a PBS special and double CD/DVD release that puts the fine Spanish guitar skills of Benise on full display while offering a retrospective of highlights from a career of re-interpreting rock songs with a blend of salsa, waltz, flamenco, tango, samba and other global flavors. Live, an international dance troupe adds a vibrant kinetic element to his performances. (Tampa Theatre, downtown Tampa)

Gilby Clarke Once upon a time, Gilby Clarke was a member of Guns n’ Roses, replacing Izzy Stradlin on rhythm guitar in 1991 and touring with the band through 1994. He also spent some time playing with Slash's Snakepit, Heart, Nancy Sinatra and MC5, among others, fronted his own group Rock Star Supernova (featuring musicians from Metallica and Mötley Crüe), and released seven solo LPs, too, though nothing new since 2007. (State Theatre, St. Petersburg)

Rivers Of Nihil with Dark Sermon, Black Fast Rivers of Nihil, the technical-progressive masterminds from Pennsylvania, arrive in town behind a summer-themed sophomore release, Monarchy, which manages to perfectly capture a sweltering desert summer in atmosphere. Rivers of Nihil bring such precision to their music, the group may as well be made up of robots – and they quite possibly could be, meaning the time has come for Tampa to meet their new robot overlords. (Crowbar, Ybor City)—Justin Croteau

Rosanne Cash with John Leventhal The eldest daughter of Johnny is a country-folk music songstress in her own right, with 10 No. 1 Country Hits and a solo repertoire spanning 13 albums. The most recent, 2014’s The River & the Thread, nabbed three Grammy wins – Best Americana Album, Best American Roots Song and Best American Roots Performance, the latter two for "A Feather's Not a Bird." (Capitol Theatre, Clearwater)

7 Below – A Tribute to Phish This New England quartet of diehard ‘heads pay tribute to one of the greatest rock bands of our time with a live experience that includes lights, jams, and setlists touching on all eras of Phish, from Junta through Fuego, along with trademark covers. 7 Below plays Dunedin Brewery both Thursday and Saturday, and you can expect a different setlist each night. (Dunedin Brewery, Dunedin)