Jaden Smith and GoldLink had the kids moshing, too. 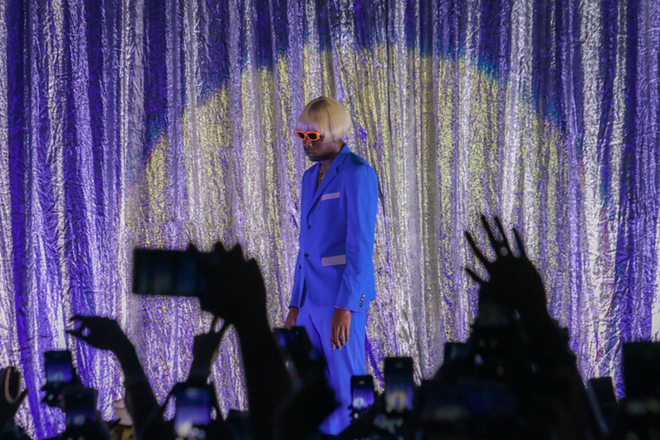 Rap music today is often branded as being “for the kids,” and while a majority of their parents may object, this newfound focus on the younger demographic has bred an era of hip-hop that fills arenas with youth that can sing, rap and scream every word.

Case and point: Last night in Tampa, where Tyler, the Creator and Co. culled 6,000 such kids — with a few chaperoning parents — to the rebranded Yuengling Center for an intimate, yet dazzling chapter of the Igor tour.

Kicking off earlier this month, the Igor tour supports Tyler’s fifth studio album, released last May. Marrying synth, neo-soul, R&B, funk and remnants of rap, the 28-year-old rapper found a production style that helped narrate the emotion and artistry that has been longing to come to fruition.

Helping to further convey the swath of style and swag, GoldLink and Jaden Smith were tabbed as openers for the first leg of the tour. The former played first in Tampa, and began right at 7 p.m. with a half-filled arena and floor vibing to his D.C.-styled hip-hop and R&B. While GoldLink’s resume is perhaps more impressive to date, it was the 21-year-old Smith that seemed to command a larger crowd, as the bulk arrived just in time for his set at 7:45 p.m.

Adorned in a white hoodie and acid wash jeans, Will Smith’s youngest son sang, rapped, and danced his way through a 50-minute set that largely focused on his latest project, ERYS. With images from the album’s music videos rolling in the background, Smith commanded the crowd of kids to mosh and roar at will in between sips from his conservation-minded JUST Water boxes.

This youthful artistic showing readied the vibe for the night’s headliner, who took over the stage at 9:07 p.m. with synths blaring “Igor’s Theme.” Known for his colorful and exuberant wardrobe, the Calfornia-native did not disappoint with his outfit choice Saturday. Topped off by a blonde wig (replicas were for sale at the merch stand for $30), Tyler rocked bright pink shades and an impudent blue suit, one that bared his chest and cut off above the ankles to unveil sparkling white dress shoes.

Rightfully so, the set opened with six tracks from the new album, a stretch that culminated in a beautiful, piano-led rendition of “Earfquake.” While soloing on a pearl white grand piano, Tyler let the crowd sing the first minute-and-a-half of his highest charting track to date (no.13 on Billboard) before he jumped in himself.

While Tyler chatted with the crowd periodically throughout the night (“This sh*t is moist!”), his first stop in Tampa in five years was all about the music. His 19-song setlist barely surpassed 70 minutes, but that was all OK. Every minute of Saturday night’s show was filled with the same eccentric, outrageous energy fans have come to love him for.

In the past, hype and bravado seemed to be more his style, but 2019 Tyler, the Creator is here to be viewed as a well-rounded artist both in the studio and on stage. Sure there were moments of fire (“Who Dat Boy”) and strobe light-driven rage (“Yonkers”), but often the best moments happened when the rapper was dancing and singing, yes singing, along to the hooks so artfully crafted on Igor’s production.

On “See You Again,” one of the night’s closing tracks, Tyler stood before the giant LED-monitor in the back, tassel curtains swaying down on either side. On screen, an army of Tyler’s came to life, similarly rocking wigs and blue suits as they danced in a circle along with the real Tyler on stage. Upon turning around, the rapper would discover he wasn’t in need of a replica army on the LED, as the entire room full of kids, most donning the same wig, were already dancing along with him.

Much of Tyler, the Creator’s career has felt like an aspiration for something bigger, and Saturday night in Tampa showed that he’s probably closer to that than ever before. Here’s to hoping he doesn't make us wait another five years to see the next chapter.