What's next for Jannus Landing?

The life, death and rebirth of a beloved concert venue. 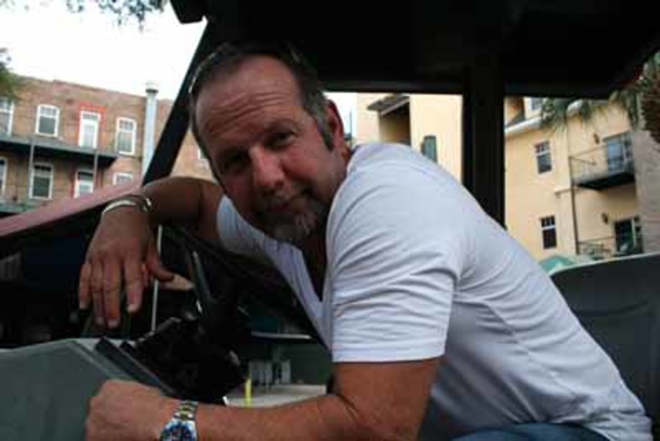 "This didn't have to happen," says Rob Douglas, his 6-foot-4 frame slouched on a sofa in his south St. Pete condo, his raspy voice weary and tinged with bitterness. He's a linchpin of the St. Petersburg concert scene, his tenure as a promoter, venue operator and production manager dating back to the early '80s, when shows were put on by enterprising locals rather than megacorporations. He spent 25 years working at Jannus Landing, one of the Bay area's most beloved concert venues, until August when he severed ties with the downtown St. Pete institution. Douglas, 54, had reached the end of his tether with then-owner Jack Bodziak. "Even with the wreckage of the economy, we could have survived this," Douglas says. "It was due to piss-poor stewardship."

When he spoke those words in late October, Jannus Landing had been empty for most of the prior three months, its last show having been the execrable Insane Clown Posse on Oct. 9. Several scheduled concerts had relocated to other venues, most to the Ritz Ybor. Bodziak was beset by financial and legal problems, the most glaring of which was his arrest by state agents in May on charges that he failed to pay more than $200,000 in sales tax on revenues from Jannus Landing. He also owed a reported $160,000 in back rent and faced eviction. A new guy, Jeff Knight, waited in the wings, a well-heeled businessman with grandiose plans and no experience in the concert business.

So How did Jannus Landing get into this mess? In many respects, the venue was an unlikely success story, a ragtag, makeshift space that over the years became a go-to place for concertgoers of literally all ages. Its recent downfall has set the rumor mill abuzz, caused confusion and disappointment among devotees, and erased a major source of traffic for nearby businesses. While the troubles at Baywalk have made regular headlines in the mainstream press, the darkness at Jannus, just a couple of blocks south, has been a far more pressing concern to music fans and arguably as important a problem for downtown overall.

A contingent of St. Pete's concert insiders, some of whom requested anonymity, laid the demise of Jannus Landing squarely at Bodziak's feet. When asked if Jannus Landing failed because of mismanagement, the resounding answer was: Yes.

What's next for Jannus Landing? On Oct. 23, Knight, 47, struck a deal to take over the venue. He appears to have weathered the first blush of external doubt, and is convincing in his intent to restore Jannus Landing to its status as a busy concert venue, one with a much-improved infrastructure and vastly upgraded aesthetics and amenities. He laid out his master plan recently, right down to the color of the floor in front of the stage and the ounces of liquor in a mixed drink (1.25). And if all goes well, the wait for Jannus Landing's return won't be long.

As for Bodziak, 37, he steadfastly maintains that Jannus Landing was felled by a bad economy, that he did everything he could to keep it afloat. He declined to discuss his legal woes or specifics about his financial situation. During a 40-minute phone interview, he came off by turns defiant, upbeat, contrite and, yes, a little bitter.

"In a 12-year span, for 10 years we had a great run," he said, "a lot more good times than bad times. The people throwing dirt on me now were the first people to pat me on the back and say I was a great guy. They made a lot of money working with me, and now it's, 'What have you done for me lately?' 'Well, I paid your mortgage for the last decade.' It's been an unfortunate lesson for me that when times are bad you find out who your true friends are."

In the late 1970s, the city of St. Petersburg rehabbed a fatigued block at First Avenue N. and Second Street, and named it after aviation pioneer Tony Jannus. Offices, small retailers and a handful of restaurants and clubs set up shop at Jannus Landing, but its central courtyard went essentially unused. In 1984, owners Bob Barnes and Bill Pendergast opened the courtyard to small-time promoters presenting punk and reggae shows.

Rob Douglas had run a successful concert enterprise at Tierra Verde Island Resort, and after it closed promoted a handful of concerts at Jannus Landing. Barnes and Pendergast hired Douglas to run the joint and its adjacent nightspot, the Club Detroit.

In the latter half of the '80s and into the '90s, Jannus Landing bloomed. Transcending its value as a concert destination, the courtyard proved that youth and counterculture could gain a foothold in sleepy St. Pete. It became a home away from home for music fiends and the local bands that performed there regularly. Folks didn't much care about its lack of seating or that the restrooms were a travesty. The place resonated an urban shabby chic that suited the clientele just fine.