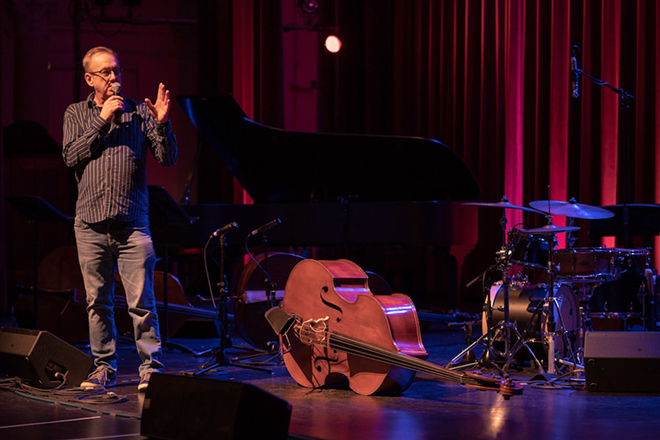 When asked which venues support jazz in the Bay area, nearly every musician, promoter and supporter we polled mentioned the Palladium Theater in St. Petersburg.

Established in 1998 and absorbed as part of St. Petersburg College (SPC) in 2007, the Palladium, located at 253 5th Ave. N., is built around two rooms: the 850-seat Hough Hall and a 175-seat listening room called the Side Door, which both provide their own unique and unquestionably intimate concert experiences. It’s not uncommon to see jazz programed in one of the rooms at least once, twice and occasionally three times in one week, but Palladium Executive Director Paul Wilborn did dispel CL’s assumption that SPC’s backing is the sole reason for the venue’s success in booking jazz.

“That’s wrong. Even though I am affiliated with the college, I do have to make my own budget. We are able to do what we do through ticket sales and a little bit of fundraising,” Wilborn — who’s been booking jazz at the venue for over a dozen years — told CL as he checked in from a work conference. There are some advantages to being affiliated with the college, however, like the fact that he doesn’t pay rent or cleaning bills for the building. When it comes to programming, Wilborn and his team have to make the economics work, and in a competitive performing arts market with a busy calendar and multiple venues, the Palladium saw jazz as something it could own.

“And jazz is kind of affordable,” he said, adding that he’s at the conference trying to figure out how to present dance, which can apparently break a budget with the huge expenses. “We’ve just slowly built the jazz audience, and jazz is the thing that helped me balance my budget.”

But Wilborn’s experience is still an exception to the rule for a market where the majority of music fans are more keen to attend rock, EDM and hip-hop shows. The Palladium’s key to success was to build its programming around local names.

“I think you’re talking about jazz as this big, all-encompassing thing. People like John Lamb, Nate Najar, Jeremy Carter and James Suggs, these folks have a draw,” Wilborn added. “It’s harder to present a touring jazz artist that nobody knows then to have that artist play with an artist that people do know.”

So these local artists actually bring in these artists that they do know (for instance, Najar brought D.C.-based percussionist Chuck Redd last Friday) and have them backed by locals like La Lucha. More than 600 people paid admission to a January birthday celebration for Lamb where the bill was all locals.

“It was 100% wonderful jazz… and it was earned at the box office,” Wilborn said, conceding that he does have to tweak the formula for blues and rock shows at the Palladium. “With those shows I sell the tickets cheaper, and the audience drinks more beer — jazz people pay more and drink less beer.”

What also draws artists to his room is the fact that it provides a place where audiences want to actually listen. Wilborn has never had to make a stage announcement asking for the crowd’s attention.

“If somebody is talking, the audience itself usually corrects the problem,” Wilborn said. So where does he like to watch jazz when he can escape the grip of his own facility? “I just saw a show at the Tampa Theatre, and The Attic in Ybor City is really good for that. [email protected] is doing jazz now, too.”

And with dwindling media coverage of the local jazz scene, what does Wilborn do to grow his audience?

“Well, first off, when the traditional media does cover something it does help… it’s amazing what the media can turn out,” Wilborn said. “But maybe right now there’s not enough people writing about it, not enough space for it, and with the internet, maybe not enough people seeing it.”

To combat the combined effects of all that, Wilborn spends a lot of his marketing budget buying fewer traditional ads. Instead, he finds new ways to reach the venue’s already existing audience.

“We spend our money finding our audience and then trying to get them in,” he said.

So which venues should someone interested in learning about Tampa Bay’s vibrant jazz scene head to first?

Outside of the rooms mentioned above, artists and tenured fans of jazz had plenty of less-thought-about suggestions. Two of the scene’s biggest supporters — WUSF’s Bob Seymour and Mike Cornette — even offered their advice for someone trying to catch jazz seven nights a week.

On Mondays, Dwayne White’s jam session at The Hangar in St. Petersburg is a must-visit for anyone interested in seeing the area’s best young talent. Tuesday is a good opportunity to see Tampa Bay jazz matriarch Kitty Daniels at Donatello in Tampa. For Wednesdays, both Seymour and Cornette agree that St. Peterburg’s Mandarin Hide and its Mandarin Heights sister restaurant in Tampa are the places to be since Nate Najar and Jackson Harpe play there, respectively. Thursdays belong to Acme Jazz Garage and its residency at Timpano in Hyde Park (former Tampa Tribune critic Philip Booth plays in Acme, which also performs at Timpano on Fridays).

The weekend, surprisingly, involves a little more creativity. Cornette suggests spending Friday with Interplay at Positano’s in Palm Harbor while Seymour recommends a trip to Alfano’s in Clearwater for a set from Karen Benjay (pro tip: Benjay is back at Alfano’s on Saturday anyway). An opportunity to catch one of the area’s longest running Saturday monthlies at Independent Bar & Café in Tampa should not be missed, and James Suggs’ Sunday jam sessions at the Independent St. Petersburg have become must-attend events, too.

What’s more is that some out-of-the-area venues — Mattison’s in downtown Sarasota, the Lakeland Loft and South Pasadena’s Horse & Jockey — have become favored haunts while new spaces like the gorgeous Fenway Hotel in Dunedin are starting to make themselves heard.

Another stop recommended by many artists was downtown St. Petersburg’s Ruby’s Elixir (where Shawn Brown and Hiram Hazley have residencies).

Get information on the locations mentioned above, and visit cltampa.com to see a full list of the venues that Bay area jazz musicians and supporters recommended. 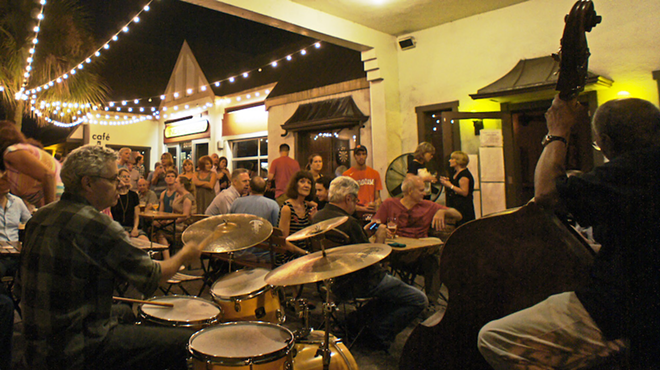 Bay Media
ON ITS OWN: Tampa’s Independent Bar & Café has been hosting a Saturday monthly since 2010.