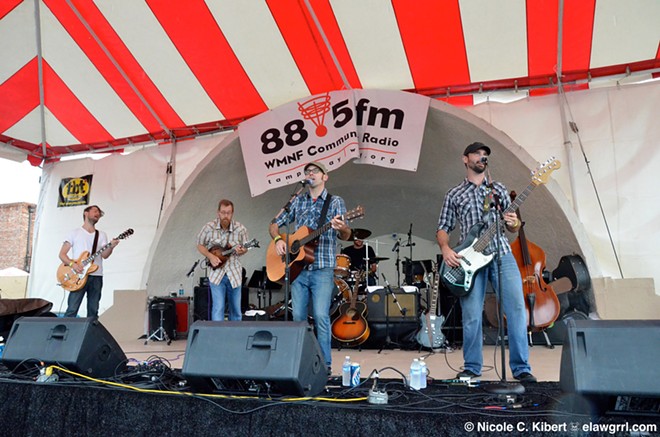 Photo by Nicole Kibert/elawgrrl.com
Have Gun, Will Travel kicking off WMNF Tropical Heatwave at the since demolished Cuban Club bandshell in Ybor City, Florida on May 14, 2011.
In 2019, Tampa Bay community radio station WMNF 88.5-FM had eyes on a May 2020 return for its beloved Tropical Heatwave festival. That never happened, but it looks like the reboot is officially off the ground and returning to Ybor City.

In the opening of La Gaceta’s “As We Heard It Column,” publisher Patrick Mantiega wrote that Tropical Heatwave—which pressed pause in 2016, citing the competitive festival market—would return to the Cuban Club in 2023.

Cuban Club, located at 2010 N Avenida Republica de Cuba in Ybor City, is where Heatwave first got off the ground, but soon included dozens of venues stretching several blocks across the historic district.

"The 2023 Tropical Heatwave will likely go back to its early days and focus its acts around the Cuban Club," Mantiega wrote. "We are happy to have this tradition return to Ybor City."

Additional details for the return of WMNF Tampa’s Tropical Heatwave 2023 are still unknown, and Creative Loafing Tampa Bay left a message for Program Director Samantha Hval and will update this post when more information is available.